New Delhi: Prime Minister Narendra Modi announced on Wednesday that India had test-fired a rocket that shot down one of its own satellites, escalating the country's rivalry with China and Pakistan, and demonstrating a strategic capability in space that few countries possess.

This technological leap, which was confirmed by the Pentagon, puts India in an exclusive club of nations, along with the United States, Russia and China, that have proved their ability to destroy targets in space. 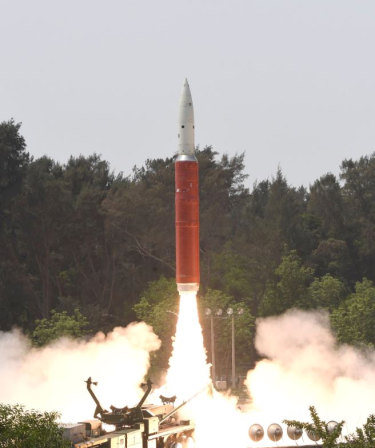 But it has potentially ominous repercussions, accelerating the space race with China and destabilising the uneasy balance of power between India and Pakistan, which are both armed with nuclear weapons. It could allow India essentially to blind an enemy by taking out its space-based communication and surveillance satellites.

Shooting down a satellite is no easy feat. In this case, scientists estimate that the satellite that India blasted apart was moving around the Earth at 17,000 mph (27,000 k/hr).

Modi made the announcement to a rapt nation just weeks before the country heads into a hotly contested election.

"India stands tall as a space power!" Modi tweeted after his announcement. He added that the entire effort had been "indigenous," accomplished entirely by Indians.

When China first successfully tested such an anti-satellite missile in 2007, it set off global concern over the growing weaponisation of space.

Many analysts now worry that the regional rivalry between India and China, the two most-populated countries in the world, has moved into space.

India's test was a "demonstration against China," said Kazuto Suzuki, an international relations professor at Hokkaido University in Japan and an expert on space security.

"The proliferation of this technology and capability would make the space order very unstable," he said.

In Washington, Air Force Lieutenant General David D. Thompson told a Senate hearing on Wednesday that India's test did occur, and that the Pentagon was aware beforehand because India had announced flight bans.

Thompson, the vice commander of the Air Force Space Command, said the launch occurred at 1.39 am US Eastern Time, and that the explosion was detected at Buckley Air Force Base in Colorado.

He said the test "struck the target vehicle" and created 270 pieces of debris that will likely increase as the debris field expands. He added that, "At this point in time, the International Space Station is not at risk."

Modi broke the news in a rare televised address to the nation, and many Indians immediately suspected that his primary objective was more political than technological.

In a little more than two weeks, India will begin holding an election — the biggest in history, with nearly 900 million registered voters — and Modi is up for re-election. Leaders in his political party have recently been heckled in public and attendance has been poor at rallies for some of his party's candidates.

Though Modi enjoyed a burst of popular support after India conducted airstrikes last month in Balakot, Pakistan, in retaliation for a deadly suicide bombing by militants against Indian forces, that news has mostly subsided.

The announcement "shows a poll-eve desperation we hadn't yet detected/suspected," tweeted Shekhar Gupta, one of India's best known political commentators. "It's just a frantic new national security headline as Balakot has faded in a month."

On Wednesday morning, Modi posted a message on Twitter, which he uses frequently, telling Indians to tune in because he was about to make a major announcement.

Many people believed the speech would be related to Pakistan; tensions had risen fast and high last month after Indian warplanes dropped several bombs on the site in Balakot where Indian authorities said anti-India militants were hiding. It is not clear what if anything the Indian air force hit.

But the next day Pakistan shot down an Indian fighter jet and captured the pilot, pushing the two nuclear-equipped nations dangerously close to a major conflict. Pakistan quickly defused the situation by releasing the pilot.

Flags came out across the country. Even Indians who disagreed with the Hindu nationalist flavour of Modi's party still cheered him.

But in the past few days, the electoral mood seems to have changed once again. Complaints about jobs, health care and farm subsidies have been rising.

Around noon, when Modi was set to address the nation, the streets of New Delhi, the capital, grew uncharacteristically quiet. Many people ducked inside shops to watch TV.

Saurav Jha, the editor-in-chief of Delhi Defence Review, an online military-related magazine, said that successfully shooting down a satellite was a major achievement.

"It's as significant as India's first nuclear blast," he said.

India has been steadily advancing its space program since its first satellite launch in 1975. It joined a manned space mission with Russia in 1984 and launched a Mars orbiter in 2013. This December, India sent its heaviest communication satellite so far, weighing nearly 5000 pounds (2260 kg), into space.

A big motivation clearly is China. As China has stepped up its satellite launches and space probes, India has been trying to catch up.

The test, Jha said, was "very much the part of the India-China rivalry."

Another factor may have been arch-rival Pakistan. Last year, China helped Pakistan launch a remote sensing satellite. India's test showed it could blast apart the Pakistani eye in the sky, turning it into space garbage.

This could make the bitter regional contest between India and Pakistan even more dangerous. Before this test, the two militaries were widely viewed as comparable. Each side has been reluctant to start a major conflict, fearing that the other could stage a devastating counterattack.

But some analysts said that India might now be able to stage a pre-emptive attack on Pakistan's satellites. That could unsettle the long-standing doctrine of mutually assured destruction that both countries have followed, and put Pakistan even more on edge.

It also could presage a change in Indian nuclear strategy. The country has always promised it would make no first use of nuclear weapons — a limitation that means it might lose one or more major cities in a nuclear exchange before striking back. But if it can leverage its new anti-satellite technology to move ahead with basic anti-missile defences, which require hitting an incoming warhead in space, it could change the strategic balance.

"The militarisation of space is underway, whether anybody likes it or not," Jha added. Part of the reason, he said, was that satellite technology had become "the backbone of global communication."

Jha and other analysts said that China, the United States and Russia had been discussing a space nonproliferation treaty, and that with this test India's position must now be considered as well.

The Indian government did not reveal what kind of satellite it had destroyed; the Ministry of External Affairs described it as "one of India's existing satellites operating in a lower orbit."

Modi has revived the notion that he is India's "chowkidar," or watchman, and looking tough in space seemed to fit nicely with that image.

"Today's success, in the coming days, will be seen as India's forward march toward a secure nation, a rich nation and a peaceful nation," he said.

The test was conducted within three minutes Wednesday morning, he said, and the satellite was flying about 186 miles 300 km above Earth. It was low enough, Indian officials said, that its debris will decay and fall back to Earth.

In 2012, Indian scientists announced they had the capability to shoot down a satellite but that it would take 24 months to prepare for such a test.

Some analysts wondered if Modi, known as a cunning political strategist, planned as early as two years ago to conduct this test right before this year's election, to give him a late-in-the-game boost.

"The timing indicates that there is politics around this," said N.K. Singh, a political analyst. "The issues of food, clothing, housing and employment are emerging on the surface in bigger way."

He added: "Nobody can say for sure but the perception of politicisation is there."