Dog earns its stripes: Indian farmer paints his Labrador to look like a TIGER to scare away monkeys after stuffed animals fail to do the trick

An Indian farmer has painted his dog to look like a tiger in an attempt to scare monkeys away from his coffee crop.

Srikanth Gowda, from Nallur village in Thirthahalli, has claimed he was able to protect his harvest from the pesky monkeys by painting his golden Labrador Bulbul with black stripes.

He opted to take the creative precaution after the soft tiger toys he had placed in his fields failed to scare the animals away – and Mr Gowda said it did the trick.

‘Earlier I used to bring soft toys from Goa and place them in my fields to scare away the monkeys. But in the long run, the colour of the toy used to fade and the monkeys would return to damaging the crop’, Mr Gowda told Asia News International.

‘I now take Bulbul to the fields twice a day – in the morning and evening. I have seen them running away at the sight of the dog. The monkeys now refrain from entering my plantations’.

Photographs posted to Twitter show the pup with black lines drawn across his golden fur in an imitation of the pattern of tiger stripes. 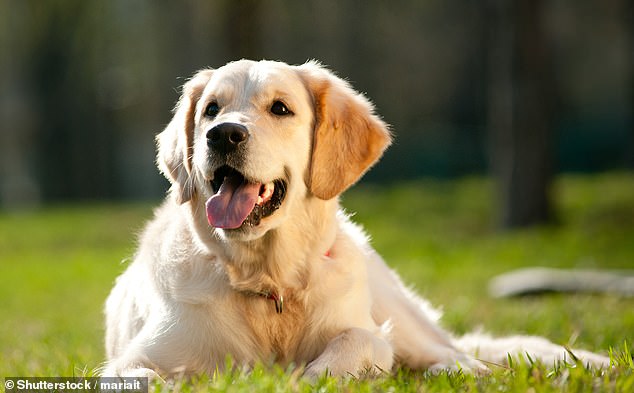 Srikanth Gowda, from Nallur village in Thirthahalli, has claimed he was able to protect his coffee harvest from monkeys by painting his pet Bulbul with black stripes (stock image)

His daughter, Amulya, added that others in the village have copied her father’s tactic after seeing its success on their farm.

‘It was my father’s idea to scare monkeys away. Earlier, monkeys used to destroy all our crops. Everyone in our village is replicating his idea,’ she said.

Photographs of the creative technique, posted to Twitter, have received more than 4,000 likes and 700 shares online.