Home » World News » Inside the insurrection: Why construction workers took to the street

The pressure within the construction industry has been building for months. Those opposed to vaccines or the hesitant – some among them close allies of construction union leader John Setka – have been growing angry and increasingly voluble.

The feeling is not confined to the Construction, Forestry, Mining and Energy Union. Those who are outright opposed to COVID-19 vaccines, including the far right, have been trawling union forums online for months, raising suspicions about the jab, about lockdowns and the state government’s policies. ACTU secretary Sally McManus spoke recently about the issue emerging across a number of blue-collar unions. 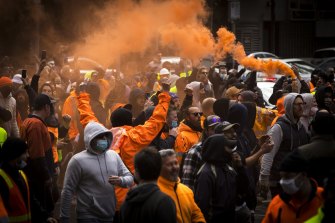 Growing frustrations have exploded onto the streets.Credit:Chris Hopkins

But in the CFMEU, with its anti-authority culture and a persecution complex – sometimes justified, sometimes not – the opposition to vaccinations struck a particular chord, according to a number of sources close to the union who spoke anonymously to protect their positions.

By September 1, weeks before the state government made a first COVID-19 vaccination dose mandatory for those working on building sites, union officials were feeling the pressure. They put out a statement: the union did not support an anti-vaccine public rally, planned for later that month, that was due to start from the front of the union’s offices.

While vaccines were “the only way out of this pandemic”, the union told its members, it supported choice and it was “up to the individual” to decide.

The CFMEU was treading a fine line. Many on its Facebook thread supported the position. A loud minority did not. 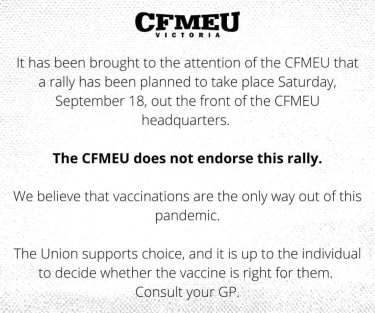 “You’s should be out in the street fighting against this tyranny not coercing members into the no jab, no job scenario,” one commenter wrote. “When will we rally against mandatory vaccinations, all the boys are ready to go,” said another.

“Will the union stand up for those who choose not to take the experimental vaccine,” said a third.

On Monday, those feelings exploded into action. Their frustration was directed not at the state government but at the union itself.

A crowd marched off city construction sites to the union’s Elizabeth Street office, smashing windows, hurling abuse and projectiles at Mr Setka, who, they chanted, was “Dan Andrews’ bitch”. The mayhem continued on Tuesday, initially in front of the union office, and later with protesters ranging widely around the city, blocking traffic and setting off flares.

The Age has spoken to half-a-dozen union people with strong links and knowledge of the CFMEU, none of whom would comment publicly, fearing retribution or for their jobs. They say that while the CFMEU construction division is publicly regarded as a militant left-wing union, over the past 15 years its politics and practices have morphed.

Under Mr Setka, the CFMEU has left behind the strong class-based stance of its former leaders John Cummins and Martin Kingham and the Builders Labourers Federation’s Maoist leader, Norm Gallagher.

Long-time left-wing activists complain that Mr Setka has surrounded himself instead by a patronage network of shop stewards who are often related to him or, like him, from the Croatian community.

Many are, in fact, fiercely anti-communist and right-wing, with their families having fled Tito’s Yugoslavia. One Setka supporter attended a stewards’ meeting last year with a sticker on his car of a Croatian army division which fought alongside the Nazis in the 1940s.

And among these groups, anti-vax sentiment is rife. 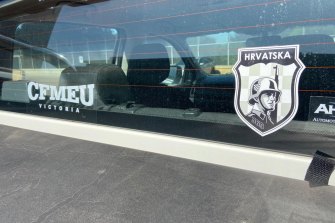 A logo of a pro-Nazi Croatian militia.

Over months, Mr Setka has been forced to play a delicate game, supporting vaccines publicly while some of his members, and strongest supporters, wanted to fight any push to make the jab mandatory.

He was also under intense pressure on another front after his estranged wife, Emma Walters, provided a sworn statement to police in late August that Mr Setka had assaulted her. He had been previously convicted of harassing her and breaching court orders in 2019 and ever since has been on the warpath against opponents in the labour movement who want him to quit. An investigation into the alleged assault “remains ongoing”, police have confirmed.

At the same time, conditions in the construction industry were imploding. Three major Melbourne sites had seen significant COVID-19 outbreaks.

That industry was one of the few that had stayed largely open throughout Victoria’s 200-plus days of lockdown. Now, suddenly, there was pressure for it to shut down.

When Chief Health Officer Brett Sutton ordered last week that lunchrooms must close and vaccines would be mandatory from September 24 for those who wanted to continue working, the frustrations came into full public view.

Last Friday, workers downed tools and closed city streets to use tram lines and roads as their lunchrooms. Some even wheeled out barbecues.

It was a classic building worker protest – an “up yours” to the bosses and the government. Many who know Mr Setka suspect he helped orchestrate it, or at least encouraged it.

Mr Setka denied it was even a protest – the blokes just needed somewhere to eat.

The public reaction, however, was mostly negative. Many others, they noted, were suffering through the pandemic and were unable to work. What did construction workers have to complain about?

Inside the union, some observed what a blunt instrument the government’s directives were. The closure of lunchrooms was significant in a hazardous industry while the mandatory vaccination order did not account for the bubbling tension within the sector.

For some workers, it fed an ever-present sense of victimhood. For others, it pointed to the CFMEU’s lack of influence and input under a leader isolated from much of the labour movement.

Then on Monday came the trigger. Workers hated a proposal pushed by the union for no rest breaks and workers being paid eight hours for six hours’ work. Most construction contractors rejected the push as well.

People walked off their city building sites in their hundreds.

Senior CFMEU figures say far-right activists and anti-vaxxers exploited the situation, but it was wrong to say, as Mr Setka did on Tuesday, that there was “a small minority of construction workers” at Monday’s melee who had quickly walked away because of the violence of “professional protesters”. 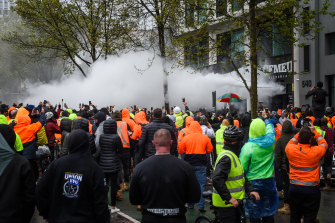 People inside the CFMEU office fend off protesters with fire extinguishers on Monday.Credit:Justin McManus

Senior figures estimated that about 80 to 90 per cent of the protesters were construction workers. Others said they knew many of the people at Monday’s rally as union delegates and members. Not all were opposed to vaccinations or were right-wing. Some were annoyed at the union caving in on safety and workers’ rights.

But by the end of the day, the union office was under such serious attack that officials turned fire hoses on protesters. In the end, they were bailed out by police, long the enemy of the CFMEU. The government promptly shut down the industry for a fortnight.

The blowback has been swift. Some rally attendees have already been sacked by their employers, industry sources say. Publicly, the union movement and supporters dismissed the protesters as far-right ring-ins and Nazis; Mr Setka colourfully called them “fascist un-Australian morons”.

But a separate message from four of Victoria’s building unions, including the CFMEU, seemed to mix that message: they had warned the government against making vaccines mandatory, they said, because it would cause “anger” and “discontent” in the industry.

As Mr Setka addressed the crowd on Monday, before he was forced back inside his battered office, he’d have known many of the protesters confronting him. They came from employers with close links to him and the union, such as I&D, a concrete formwork company.

One protester on Monday caught the mood, shouting at Mr Setka that they were the ones who paid his wages, and referring to “fighting for our freedom in Croatia”.

“Those boys fought against communism. Now we are staring down the barrel of communism again,” the man yelled. “No f—ing c— is going to put a vaccine inside me.”