Home » World News » Interactive: What the census data says about your Melbourne suburb

Find out what the census data says about your suburb.Credit:Luis Araujo

Using this interactive, you can see what the census data shows for your suburb, and see how your area compares with the rest of Australia for things like income, religion, average age, home ownership and more.

Simply type the name of your suburb into the search box below:

The median age in Victoria is 38.

On average, Victorians skew slightly older than residents of the Northern Territory (33) and ACT (35) but are younger than people in South Australia (41) and Tasmania (42).

The youngest suburbs are Parkville, Clayton North and Melbourne CBD – North, where the median age is 26. These areas are all home to a lot of students who attend nearby universities.

In the suburban fringe suburbs of Tarneit, Clyde and Wyndham Vale, where young families have flocked over the past decade, the median age is 29.

The suburbs with the highest median age are by the water. In Paynesville, on the Gippsland coast, and Point Lonsdale, the median age is 61.

Median mortgage repayments are highest in Brighton, Brighton East, Surrey Hills, Toorak and Balwyn North. In all of these areas the median monthly repayment is above $3000. That compares with $1859 for all of Victoria. 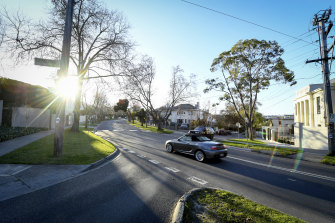 Toorak has among the highest median monthly mortgage repayments.Credit:Penny Stephens

The suburb with the most expensive median rent is in bayside Beaumaris. where half of the renter households are paying at least $612 a week. The statewide median is $370. 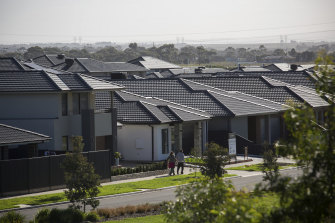 The fast-growing suburb of Tarneit.Credit:Paul Jeffers

Tarneit, Truganina and Clyde North have the lowest percentage of people who own outright – these are newer areas with homes that were built in the past decade or so, lived in by young families who have many years left on their mortgages.

One of the key findings in the census was how there had been a considerable drop in the proportion of Christian Australians and a rise in the percentage who ticked the “no religion” box.

In Victoria, 43.8 per cent are Christian and 42.1 per cent have no religion, but these percentages vary across the state.

There is a ring of suburbs surrounding Melbourne Airport that have the highest percentage of people who are Christian, more than two-thirds. This “Bible Ring” includes Taylors Lakes, Keilor, Keilor East and Avondale Heights,.

Meanwhile, more than two-thirds of census respondents in Fitzroy North, Brunswick, Northcote and Carlton North are either atheists or agnostic. In regional Victoria, 68.6 per cent of Castlemaine do not follow religion.

For the first time, the 2021 census allowed people to specify whether they had any long-term health conditions.

Paynesville had the highest percentage of people with arthritis, cancer and heart disease, but this area also has a population that is older than the rest of the state.

The most common health issue in Victoria was a mental health condition such as depression or anxiety, which affected 571,000 people, or 9.5 per cent of census respondents.

In the metropolitan region, people in the Brunswick area recorded the highest rates of mental health issues, at around 15 per cent.

No timeline set for further Turkish forces in Qatar