Iran’s leaders have hit back at criticism from Western countries, including the US, over anti-government protests. 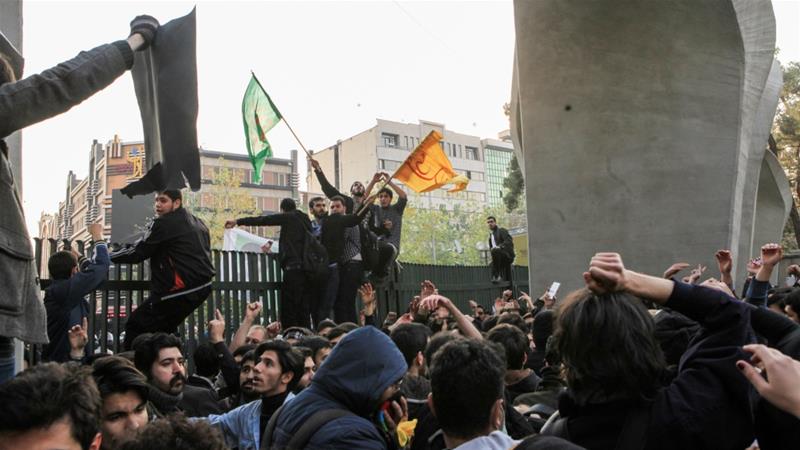 A spokesperson for Iran’s foreign ministry has condemned Canada’s “interventionist” response to widespread demonstrations taking place in the country, the latest critique lobbed by Tehran against countries that have shown support for the protesters.

Widespread anti-government protests, the biggest show of dissent in Iran since 2009, broke out in several Iranian cities earlier this week.

While the demonstrations began as a response to rising living costs, unemployment and inequality, they have since taken on an anti-government message.

The Canadian ministry of foreign affairs released a short statement on Saturday, saying it was “closely monitoring” the protests and calling “on the Iranian authorities to uphold and respect democratic and human rights”.

“Canada is encouraged by the Iranian people who are exercising their basic right to protest peacefully,”  Global Affairs Canada said. “Canada will continue to support the fundamental rights of Iranians, including the right to freedom of expression.”

Canada is closely monitoring the ongoing protests in #Iran https://t.co/MsSQILL0XI

Qasemi said Canada’s statement does not align with its efforts to reestablish diplomatic ties with Tehran.

Canada’s former prime minister, Stephen Harper, suspended diplomatic relations with Iran in 2012 and Ottawa kicked Iranian diplomats out of the country and shuttered its embassy in Tehran.

After being elected in 2015, Justin Trudeau made restoring relations with Iran one of his government’s foreign policy priorities.

The United States has also responded to the protests, drawing the anger of Iranian leaders.

In a tweet, President Donald Trump said the US is “watching very closely for human rights violations”.

“Oppressive regimes cannot endure forever … The world is watching!” the US president wrote in another social media post.

Big protests in Iran. The people are finally getting wise as to how their money and wealth is being stolen and squandered on terrorism. Looks like they will not take it any longer. The USA is watching very closely for human rights violations!

Rouhani hit back at Trump on Sunday, saying the US president “has forgotten that he had called Iranian people ‘terrorists’ a few months ago”.

Making his first comments since the protests began, Rouhani said Iranians had the right to protest but cautioned that violence is unacceptable.

“It should be clear to everyone that we are people of freedom. According to the constitution and citizens’ rights, people are free to express their criticism and to protest,” Rouhani said in a televised address.

Under Trump’s administration, the US and Iran have grown further apart, clashing on foreign policy issues such as the wars in Syria and Yemen and the 2015 Iranian nuclear deal with world powers.

Trump has also sought to ban Iranian nationals from entering the US.