Home » World News » Is THIS why Omicron is spreading so rapidly?

Is THIS why Omicron is spreading so rapidly? Study claims ultra-infectious variant replicates in airways 70 TIMES quicker than Delta… but it struggles when it reaches the lungs in more proof it may be milder

The Omicron variant multiplies 70 times faster than Delta in the airways, according to a study which may explain why the mutant virus is spreading at a ferocious pace.

Hong Kong University researchers also found that the new variant replicates 10 times slower in the lungs than its predecessor.

That finding lends weight to the theory that it is milder than the past variants, something which doctors in South Africa have been claiming for weeks.

The researchers exposed lung tissue in a laboratory to the original Covid strain that was identified in Wuhan last year, along with the two variants, to compare how the viruses behave after infection.

Omicron replicated faster in the bronchus — tubes connecting the windpipe and lungs — suggesting people with the strain may be more infectious.

Delta was found to duplicate much more quickly in the lungs, where more of the virus can lead to the most severe illness.

The finding may be the biological clue behind why doctors insist people infected with the strain only suffer cold-like symptoms. 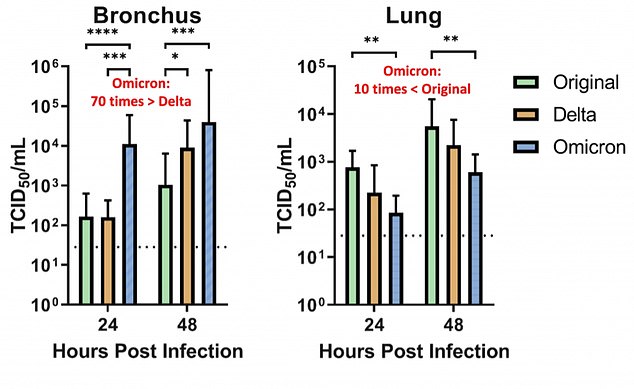 The graphs show the amount of the coronavirus detected in human bronchial cells (left) and lung cells (right) 24 and 48 hours after coming into contact with the original strain of the virus (green), Delta (orange) and Omicron (blue). There was 70 times more Omicron recorded in the bronchus — the main pipe connecting the airways and lungs — compared to previous strains, but 10 times less virus in the lungs when compared to the original version and Delta. Experts from the University of Hong Kong said this suggests the virus is more transmissible but may cause less severe illness 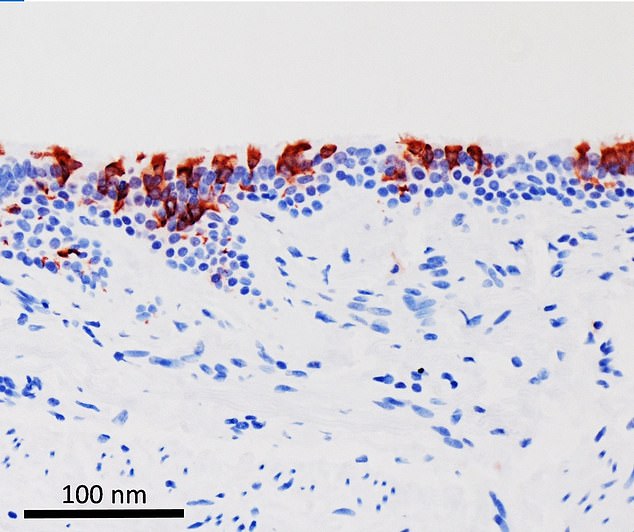 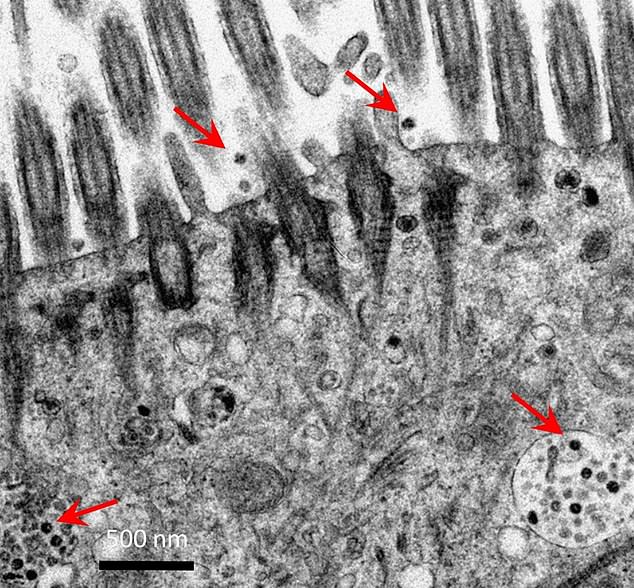 But Dr Michael Chan Chi-wai, a public health expert at Hong Kong University and chief investigator, warned speed of replication is only one way of measuring the severity of Covid infection and individuals can still become unwell with the virus.

And the threat from Omicron ‘is likely to be very significant’ and could lead to higher rates of severe illness and deaths at a population level than other strains by infecting many more people, he said.

The findings add to data, studies and reports from doctors on the ground that the virus spreads rapidly but causes less severe symptoms.

A real world study in South Africa found there was 29 per cent less severity from Omicron compared to earlier waves, while there were a third fewer hospitalisations.

It comes as the UK yesterday recorded its highest number of daily Covid cases since the pandemic began, with 78,610 confirmed.

The actual number infected will be many times higher, with the UK Health Security Agency estimating 200,000 people caught Covid on Monday alone.

However, the UKHSA has only reported 10 hospitalisations and one death linked with the variant.

At a Downing Street briefing last night, the Prime Minister urged Britons to scale back their Christmas plans and only socialise when necessary in a bid to control the spread.

Experts have warned that even if the virus is much milder, record numbers will become infected in the coming weeks which could lead to more hospitalisations than last winter.

They found that 24 hours after becoming infected with Omicron, the virus replicated at a rate 70 times higher than Delta and the Wuhan strain in the bronchus.

But in the lungs, it replicated less efficiently – 10 times slower – than the original virus. This may explain why Omicron is thought to cause less severe disease.

Dr Chan said: ‘It is important to note that the severity of disease in humans is not determined only by virus replication but also by the host immune response to the infection.

‘It is also noted that, by infecting many more people, a very infectious virus may cause more severe disease and death even though the virus itself may be less pathogenic.

‘Therefore, taken together with our recent studies showing that the Omicron variant can partially escape immunity from vaccines and past infection, the overall threat from Omicron variant is likely to be very significant.’

Dr Muge Cevik, an infectious diseases expert at the University of St Andrews, said on Twitter: ‘For those asking whether this is good/bad news, simple answer: I don’t know.

‘The only thing I am sure of is that Omicron will spread so quickly through the population, making it likely impossible to contain even with the most stringent measures and giving us very little time over the next few weeks. So get your vaccines and boosters.’

Dr Meaghan Kall, an epidemiologist at the UKHSA, yesterday tweeted: ‘I remain optimistic about Omicron being milder’.

She said up to eight in 10 people in hospital wards and care homes were testing positive for the strain – an infection rate not seen since the vaccines were rolled out a year ago.

But most are ‘asymptomatic and mild infections’, Dr Kall said.

‘I am 100 per cent certain that large-scale immunity conferred by vaccines or infection will drive down the rates of severe disease compared to previous variants,’ she added.

It comes as millions of Britons have axed their festive plans so they can see family on Christmas Day.

The Prime Minister and Professor Chris Whitty, England’s chief medical officer, triggered a wave of pub and restaurant cancellations by urging the country only to socialise if necessary – and not in large groups or with strangers.

People have started voluntarily self-isolating in a bid to avoid having to isolate on December 25 if they test positive for Covid.

Professor Whitty said that a rise in Omicron hospitalisations is ‘nailed on’ after cases hit a record high yesterday, telling a televised No 10 press briefing: ‘I think that what most people are doing is – and I would think this seems very sensible – is prioritising the social interactions that really matter to them and, to project those ones, de-prioritising ones that matter much less to them.’

He also rubbished a major real-world study from South Africa which suggested that the variant was milder, insisting Omicron ‘is going to be a problem’.

And after weeks of refusing to admit Christmas plans could be under threat, Mr Johnson told the country to cut back on Christmas partying and ‘think carefully’ before going out during the festive season.

WHAT DOES THE LAB EVIDENCE SHOW ABOUT VACCINE EFFECTIVENESS AGAINST OMICRON?

People vaccinated with Pfizer have 40 times less antibodies that can fight against Omicron compared to other variants, according to one lab-based study.

They examined levels of neutralising antibodies that can prevent infection from Omicron.

The researchers found there is a 40-fold decrease in antibodies that fight against the strain, compared to the number that can defend against other variants.

The study only looked at antibodies, which are just one part of the immune response that fights off the virus. Although they are normally a reliable indicator.

It is not clear that this will translate into lower protection against severe illness, hospitalisation and death among those who catch the strain.

The researchers also found that Omicron still uses the ACE2 receptor on cells to infect people.

Professor Alex Sigal, a virologist at the AHRI who led the study, said this means the variant can be managed with the vaccines we have.

A separate study by researchers in Sweden found that while there is a drop in the body’s ability to neutralise Omicron it is not seen in everyone and is a smaller drop than feared.

Scientists at the Karolinska Institute in Stockholm found there was an average seven-fold drop in neutralisation potency against Omicron.

But it varied between a 1-fold and 23-fold reduction among patients.

Researchers said almost all blood samples evaluated had some form of neutralising antibody response against Omicron.

Their findings were based on recent blood samples from 17 people in Stockholm, compared to 17 hospital workers who were previously infected with the original Wuhan strain.

Benjamin Murrell, an assistant professor in computational biology, virology and immunology and one of the researchers behind the study, said this is ‘certainly worse than Delta’ but is not ‘as extreme as we expected’.

He said the AHRI study reported a ‘much more substantial average reduction’ but noted ‘what is common is that neutralisation is not completely lost for all samples, which is positive’.

A third set of results shared by researchers in Germany found neutralising antibodies from two doses of the vaccines used in the UK are ineffective against the strain.

Dr Sandra Ciesek, a virologist at the German Center for Infection Research, tweeted laboratory findings, which have not yet been published, show that six months after two doses of Pfizer or Moderna, or a first dose of AstraZeneca and second dose of Pfizer, there was no neutralising antibodies present that could protect against Omicron.

Dr Ciesek said this translates into a 37-fold reduction against Omicron compared to the Delta strain.

But Dr Ciesek noted that the results ‘cannot say anything’ about whether people are still protected from severe illness, which other parts of the immune system play a key part in warding off.

Pfizer’s results are based on a laboratory study using the blood of 20 people, who were either double-jabbed three weeks earlier or triple-jabbed one month earlier with its vaccine.

The results showed the third dose may provide a ‘more robust protection’, triggering a 25-fold jump in antibody levels.

Pfizer, which manufactured the jab with German partner firm BioNTech, said the levels equated to a ‘high efficacy’ based on data against other variants.

A booster jab offered a boost in antibody levels that are ‘comparable to those observed’ for the original Wuhan virus after two doses, the company said.

The level of neutralising antibodies against Omicron after three jabs was 154, compared to 155 against the Wuhan strain after two jabs.

But the figure was 60 per cent lower than levels seen for three doses against Delta.

Coronavirus outbreak fears in Afghanistan amid influx from Iran

Rapist whose deportation stopped by passenger mutiny STILL in the UK