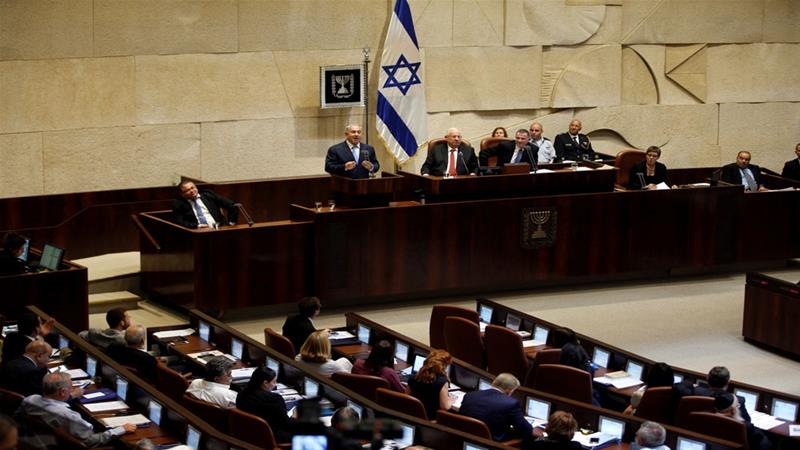 Nazareth, Israel – After seven years of delays, the Israeli governing parties have agreed the final terms of controversial new legislation that would define Israel exclusively as “the nation-state of the Jewish people”.

The bill is now expected to be fast-tracked through the Israeli parliament and on to the statute books in the coming weeks.

Approval by the parliament’s justice committee this week of the Basic Law, which carries much greater weight than normal legislation, marks a dangerous turning-point for Palestinians, according to analysts.

Amir Ohana, the committee’s chair, called it the “law of all laws”, while a government minister termed it “Zionism’s flagship bill”.

It effectively blocks any chance for Israel’s large Palestinian minority – one in five of the population – to reform Israel in the future into a normal, Western-style democracy.

In the words of one of the handful of Palestinian members of the Israeli parliament, Aida Touma-Suleiman, the bill “institutionalises an apartheid regime in the most blatant way”.

But equally significantly, and largely unnoticed, the Basic Law paves the way for Israel’s right-wing government to consolidate and expand the annexation of Palestinian lands under occupation in East Jerusalem and the West Bank – and stymie any legal moves intended to prevent such efforts.

The weight of expectations on the new bill is part of the reason it has undergone such a lengthy process of redrafting since a first version was introduced in 2011 by Avi Dichter, a member of Israeli Prime Minister Benjamin Netanyahu’s Likud party.

The proposed Basic Law has attracted scrutiny chiefly for the unconcealed nature of its anti-democratic provisions.

The final version approved this week demotes the status of Arabic – the mother tongue of one-fifth of Israel’s citizens – so that it is no longer an official language alongside Hebrew.

It also promotes Jewish communities that strictly enforce rules to exclude Israel’s 1.8 million Palestinian citizens. It reiterates Israel’s mission to “ingather the exiles”, restricting immigration to Jews only, and prioritises the rights of Jews abroad over those of the country’s Palestinian citizens.

Most significant of all, it dispenses with any “democratic” component in Israel’s self-definition. Israel’s “Jewishness” is made paramount.

Tourism Minister Yariv Levin, who maintains close ties to Netanyahu, observed of the bill: “It will bring order, clarify what is taken for granted and put Israel back on the right path. A country that is different from all others in one way – that it is the nation-state of the Jewish people.”

As Levin suggests, while there is little ostensibly new in the bill, it “clarifies” and shores up Israel’s current anomalous political makeup.

The Arabic language is already invisible in most public spaces in Israel. Some 93 percent of Israel’s land is already reserved exclusively for the Jewish people around the world, not Israel’s citizens. The Law of Return already allows only Jews to immigrate.

And many critics, including Israeli scholars, argue it is impossible for Israel to be both “Jewish and democratic” – any more than it could be “white and democratic” or “Christian and democratic”. They describe Israel as a non-democratic type of state known as an “ethnocracy”.

So why go to such trouble to legislate the current bill when it changes so little?

There are several urgent impulses behind the Basic Law.

In part, it is the right’s response to a series of embarrassing legal and political challenges that have needed to be faced down since Israel passed a Basic Law on Freedom and Human Dignity in 1992.

After the law defined Israel as a “Jewish and democratic state”, legal rights groups initiated challenges in the courts for Israel to respect equality.

That gradually exposed the unresolvable contradictions between the state’s “Jewish and democratic” claims, according to Ahmad Saadi, a politics professor at Ben Gurion University in Beersheva.

The first major crisis arrived at the supreme court in 2000, when a Palestinian citizen, Adel Kaadan, sued to be allowed to live in one of Israel’s 700 exclusively Jewish communities. Each community had set up a so-called “admissions committee” specifically to block access for Palestinian citizens.

Lawyers argued that, in excluding 20 percent of its population from almost all land in Israel, the state was enforcing residential apartheid.

The judges agonised over the case for years. In 2011, Netanyahu’s government finally took the court off this hook by giving the committees a statutory basis.

But the reverberations are still being felt.

Last month, the far-right justice minister, Ayelet Shaked, cited the Kaadan case as a reason for the nation-state Basic Law, saying: “It’s all right for a Jewish community to, by definition, be only Jewish.

“There is place to maintain a Jewish majority even at the price of violation of rights,” she added.

Political challenges have compounded the legal ones. In 2006, Palestinian leaders in Israel produced a document, the Future Vision, demanding that Israel reform from being a Jewish state into a civic democracy. They urged that Israel become a “consensual democracy”, where all citizens had equal rights.

In a highly unusual move, the Shin Bet, Israel’s secret police agency, responded in public. They called the document “subversive” and warned they would “thwart” any activity, even if legal, to promote its aims.

Since then, the figurehead of the democratisation campaign, Azmi Bishara, has been forced into exile, accused of treason.

Israel has also passed a series of measures to weaken the standing of Palestinian politicians in parliament, including an Expulsion Law that allows Jewish legislators to overthrow Palestinian colleagues.

Saadi, the professor, told Al Jazeera: “The Israeli right understands the international political climate and believes it is far more conducive to violations of human rights and overt racism than it was a decade ago.

“It senses the direction the wind is now blowing.”

Additionally, Shaked, the justice minster, has linked the Jewish Nation-State Bill to revisions she is making to another constitutional-type Basic Law, one dealing with legislation.

Jafar Farah, head of Mossawa, an advocacy group for Israel’s Palestinian citizens, pointed out this would allow the governing coalition to reverse any ruling by the Israeli supreme court against a piece of legislation, even if it violated human rights. The court’s powers of judicial review would be voided.

“This legislation will tie the judges’ hands,” Farah told Al Jazeera. “They won’t be able to intervene in government decisions.”

In a Facebook post, Shaked said she was undoing the “constitutional revolution” instituted by the 1992 Basic Law on Freedom and Human Dignity – or in her words, “realigning the train track that was twisted a quarter-century ago”.

“In the past 20 years court rulings have sharpened the universal values more than the state’s Jewish character,” she added.

Which alludes to a likely second ambition for the Jewish Nation-State Basic Law. The restraining hand of the supreme court will be lifted just as the Israeli right enjoys the tailwind of US President Donald Trump’s administration.

Farah noted Israel has still not decided on its territorial limits.

“Israel refuses to define its borders and then states through this Basic Law that only the Jewish people have a ‘unique right to self-determination’ in the region,” he said.

That could open the door to Israeli consolidating its hold on occupied East Jerusalem and accelerating a policy of creeping annexation of the occupied West Bank.

Trump is preparing to move the US embassy to Jerusalem, pre-empting in Israel’s favour one of the traditional final-status issues that were supposed to be settled in peace talks with the Palestinians.

At the same time, Israel is drafting legislation that would strip tens of thousands of Palestinians of their residency rights in occupied East Jerusalem, while annexing parts of the West Bank to Jerusalem to skew the city’s demography towards a solid Jewish majority.

In the words of Nir Hasson, a veteran Israeli reporter on Jerusalem: “The Israeli political system has already understood that Jerusalem is an anomaly that has to be solved.”

It intends, therefore, to provide a solution that refuses to “recognise the place of the Palestinians in the city”.

These violations of human rights and international law would be hard for the supreme court to stomach.

But if the Israeli government carries on its current path, the courts will soon have no say on such matters, observed Farah.

The new Jewish Nation-State Basic Law may offer other advantages, Saadi pointed out.

Netanyahu has been trying to impose a precondition on peace talks with Mahmoud Abbas that the Palestinian leader first recognise Israel as a Jewish state.

By stripping Israel of even a pretension towards democratic principles, Netanyahu would place Abbas in an impossible position.

The new Basic Law includes all of Jerusalem as Israel’s capital and gives the Jewish people alone a right to self-determination in the region. No Palestinian leader could contemplate recognising a “Jewish state” defined this way.

“Neither Israel nor the US wants negotiations. They are interested only in the Palestinians submitting,” said Saadi.

Netanyahu and his allies on the right may hope to take advantage of Washington and European capitals’ blind acceptance of Israel on its own terms as a “Jewish and democratic state”.

Will they notice that through this latest piece of legislation Israel has quietly dropped the claim that a Jewish state even aspires to be “democratic”? 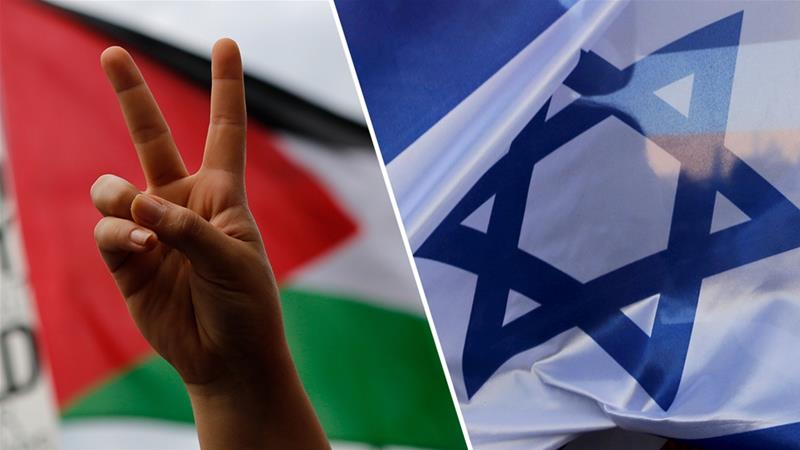 Palestine and Israel: One state, or two?