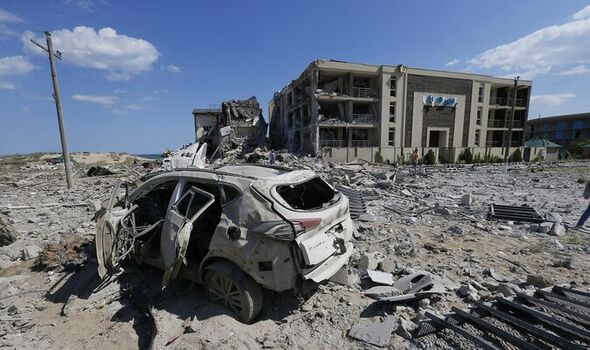 But instead of returning to the safety of Germany, Dima, 32, stayed on to volunteer – and now witnesses the horrors of warfare every day. He said: “You know, for years, I had heard the Russian propaganda about the Ukrainian army shelling civilians in the east.

“Now that I am here I can only say that I am shocked, sickened, to see how it is the Russian army that is killing so many of the Russian-speaking civilians it said were being persecuted, who it was supposed to liberate.

“It’s a real genocide.” Dima, who was born and raised in Odesa before working as an anaesthetist in Germany, now serves as a voluntary ambulance medic, taking the wounded from Ukraine’s eastern front to civilian hospitals in Dnipro and Kyiv. He said: “Of those I take, half are civilians and half are soldiers – those who cannot be handled by the army’s medical services.

“I have yet to see a single person who wasn’t the victim of shelling.” He still hasn’t got used to seeing children riddled with shrapnel.

He recalls: “There was one girl, aged 12, who we transported together with her eight-yearold sister.

“She was in a coma and we all knew she would never come out of it.”

Donetsk before being taken in his ambulance to hospital.

It is Dima’s job to monitor their vital signs during the journey, which can take anything from four to six hours. The crew also includes a driver, a paramedic and an armed soldier.

He said: “We had another little girl, whose grandmother had come along in the ambulance. When we arrived at a Ukrainian checkpoint, the woman was so frightened at the sight of men in uniform that she collapsed on to the floor of the ambulance in panic.

“One time we came under artillery fire in the middle of the night. The GPS wasn’t working right and we had taken a wrong turn somewhere. But our driver quickly got us out of there.”

In his free time, which Dima says can be worse than the ambulance rides as war weariness sets in, he usually sits around on his flak jacket, searching the internet for new sources of medical supplies or donations.

The Mobile Hospital has also received assistance in the form of volunteer medical staff, including a British ambulance driver who arrived with a donated ambulance and ended up staying on.

Dima said: “People here want to be useful and they are willing to risk their lives to help others, to do something towards stopping Russian aggression.”

While You Were Sleeping: 5 stories you might have missed, June 15