It’s one of Sydney’s most sought-after buildings, in the heart of the “Paris end” of Macleay Street, Elizabeth Bay. But residents of the Pomeroy apartments are now living in fear that their gleaming harbour views are about to be walled up – literally.

That’s because directly behind them on Billyard Avenue, the long-standing landowners are planning to erect a six-storey, 29-room boarding house that would block views from the Pomeroy up to at least the third floor.

The properties were the subject of an old dispute over the removal of several Norfolk pine trees, which ended up in court in 2015. 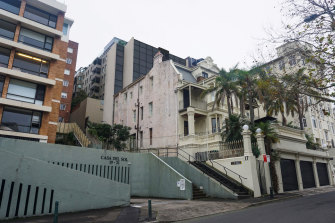 An artist’s impression of the tower of boarding house units would be erected behind the historic house on Billyard Avenue, Elizabeth Bay.Credit:Development application

Roula Sfeir, who moved into the Pomeroy just 18 months ago and lives on the second floor, was “absolutely devastated” about the boarding house proposal.

“We just don’t want this to happen,” she said. “It’s going to annihilate our view, our light, our air – the whole lot. That [view] is what you pay for and that’s what you’re in here for – and then this happens.”

Plenty of Sydney personalities have bought into the art deco Pomeroy, including the building’s architect Susan Rothwell, Bruce Sutton of the Sutton Motors empire and Lisa Keighery, widow of Marcs founder Mark Keighery.

Skye Leckie, widow of the late David Leckie, settled on her Macleay Street-facing unit just weeks ago, while the penthouse is owned by former liquor entrepreneur John Piven-Large.

John Pooley, 77, and his wife Prudence Harper have owned the Billyard Avenue property since 1988, and ran it as a boarding house for 20 years. It’s just a stone’s throw from Lindsay Fox’s trophy home Boomerang, which the trucking magnate bought in 2005 in his daughter’s name and is currently on the market for an estimated $80 million.

Now retired, Mr Pooley was an investment adviser, while his wife Prudence was a nurse, a long-serving airline chef (up the pointy end) and a qualified butler. With plenty of ambition left in them, the couple had until recently harboured grand plans to convert their striking Victorian-era home into a boutique hotel.

In 2010, they submitted plans to that effect which were approved by council but for various reasons never came to fruition. Mr Pooley says the hotel is now “a dead duck” but wants to do something for the community by providing more low-cost – though tiny – housing.

“We’ve both been pretty successful and if we can give back a little bit – this sounds like a tired old cliche – we’re happy to do so,” he says.

The animosity between Mr Pooley and the Pomeroy dates from before it even existed; when it was the site of the Chateau Commodore Hotel. Upset about the heat and fumes emanating from the hotel’s car park, Mr Pooley had 16 Norfolk Pine trees planted between the properties as a buffer. 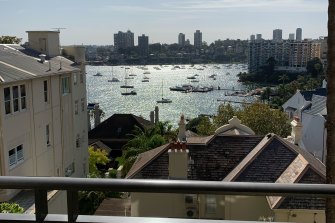 In jeopardy: the view from the Pomeroy building out over Elizabeth Bay, Sydney.

As the trees grew, and they began to obstruct the views from what was now the Pomeroy block of apartments. The residents hired arborists, Get Lopped, to cut down the pines. The City of Sydney prosecuted Get Lopped in court, they pleaded guilty and were fined more than $17,000.

Mr Pooley then commissioned a huge banner saying “TREE KILLERS” and attached it to his roof, facing the Pomeroy building. “We’ve become firm enemies with Pomeroy ever since,” he says.

But he hastens to add that if he wanted revenge over the felled trees, putting up a six-storey boarding house was “a very expensive way of doing it, mate”.

The building would house up to 37 boarders in 28 rooms, some as small as 12 square metres. In a written statement attached to the development application, Mr Pooley and his wife say: “Essential workers such as police, nurses, firefighters, teachers, defence personnel, chefs and students deserve the opportunity to live safely and within close proximity where possible to their place of work.”

Tony Wheeler, the architect of the proposed boarding house, said the surrounding neighbours were mostly wealthy people and “they find it very hard to understand that John and Prue’s motivation for this is to provide some lower cost housing”.

Not leaving anything to chance, the Pomeroy’s residents have appointed a sub-committee of the owners’ corporation to take up the fight, and hired a lawyer, architect, town planner and heritage consultant.

The committee’s leader, veterinarian Raoul Wanner, who lives on the third floor, said the planned development would be particularly devastating for residents on the ground level.

“The bottom apartment there will be turned into a gloomy cave,” he said. “We’re very disappointed. We’re looking at the impact that this is going to have on our building and the area more generally. It’s the bulk of the thing and its proximity to our boundary that leads to most of the issues to do with penetration of sunlight, obstruction of views, penetration of light generally.”

Mr Wanner said he wasn’t aware of the building’s chequered history with Mr Pooley. “We’re dealing with the development application that’s been presented. It’s nothing to do with whatever has happened in the past.”

Ms Rothwell, the Pomeroy architect, said residents had requested view-loss montages, and she was holding fire until she saw them. “Views are funny things, you can’t really assess them until you get the information.”

Don Jr slams 'insane' Dem Rep. Emanuel Cleaver for ending prayer with ‘amen and awomen’ and points out it's Latin