New Zealand Prime Minister Jacinda Ardern has arrived in London ahead of the ‘reception of the century’ on Sunday, which will see the who’s who of the global elite – including presidents, emperors and royal families – gather at Buckingham Palace on the eve of the Queen’s funeral.

King Charles III will host hundreds of dignitaries from every country the UK has diplomatic relations with in what will be the largest gathering of world leaders for a generation.

US President Joe Biden, the wife of Ukrainian President Volodymyr Zelensky – Olena Zelenska – and King Felipe and Queen Letizia of Spain are expected to be among the guests at the star-studded affair.

It is not yet known when each leader will arrive but footage shared online shows a motorcade similar to Biden’s making its way through Camden yesterday afternoon. It was spotted at around 3.15pm heading towards central London while being led by four police motorbikes. MailOnline has contacted the US Embassy for comment.

Foreign, Commonwealth and Development Office officials reportedly sent 1,000 handwritten invitations – for both the reception and Monday’s funeral – to heads of state to almost every country in the world bar Syria, Venezuela, Afghanistan, Russia, Belarus and Myanmar.

Ms Ardern confirmed she will meet the King, Prince of Wales and Prime Minister before the Queen’s funeral, but disclosed minimal details after arriving in the UK, saying she will ‘share the sorrow that New Zealand has’ with the new monarch.

‘I’ll simply share the sorrow that New Zealand has and pass on our deepest condolences,’ the visiting PM said at a press conference in London.

‘At the end of the day, although this is a period of transition for him, he has also lost his beloved mother. For us and New Zealand, that’s first and foremost.’ 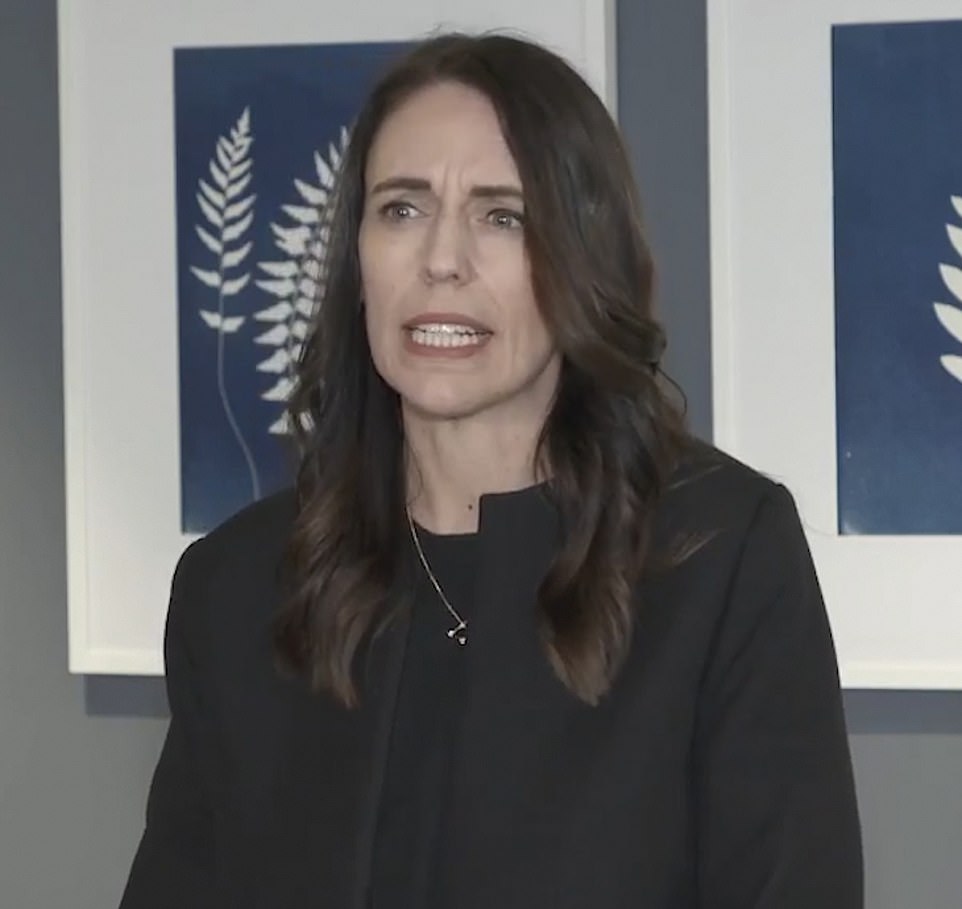 New Zealand Prime Minister Jacinda Ardern (pictured in London today) has arrived in London ahead of the ‘reception of the century’, which will see the who’s who of the global elite – including presidents, emperors and royal families – gather at Buckingham Palace on the eve of the Queen’s funeral 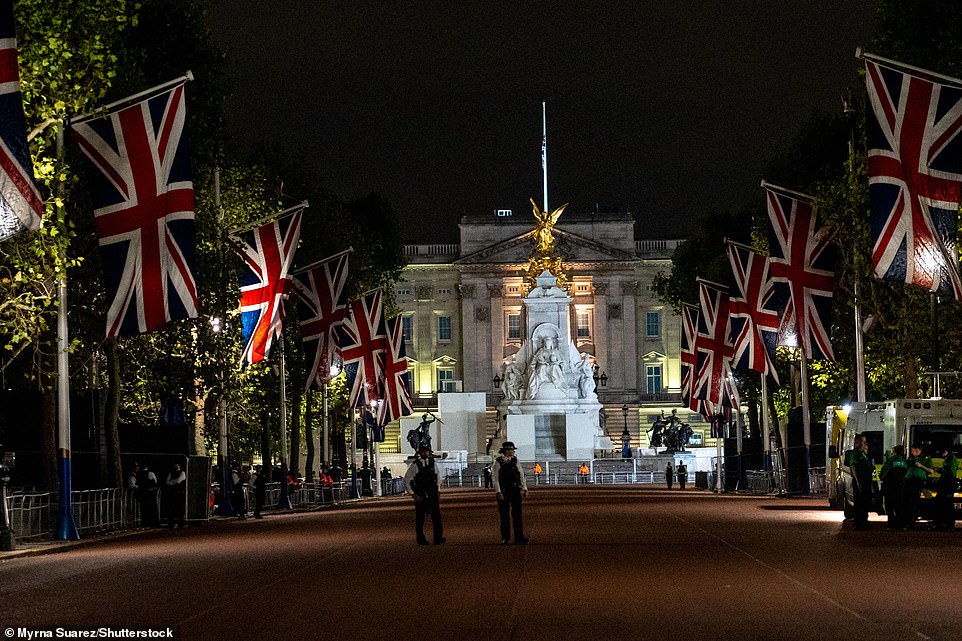 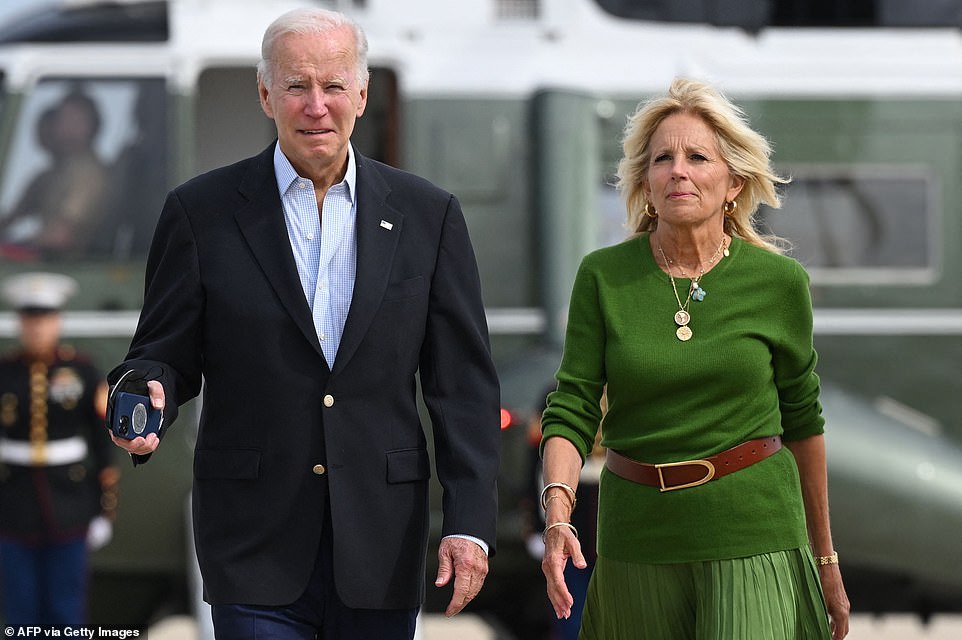 President Biden and First Lady Jill will be able to take the armored Beast to the Queen’s funeral next week while ‘lesser’ world leaders will be asked to take the shared bus, as is standard protocol 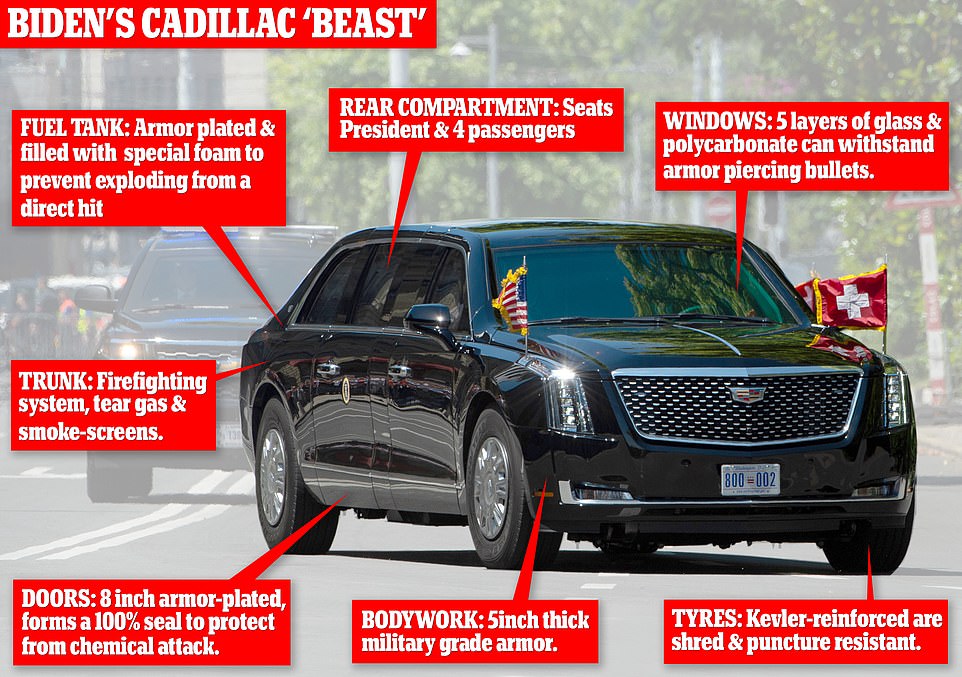 Biden’s motorcade The Beast crosses a bridge on the way to his summit with Putin in Geneva. It is believed it will make an appearance in London this weekend as the leader of the free world arrives for the Queen’s funeral

What will happen at the ‘reception of the century’ on Sunday and who will be there?

King Charles III is set to play host to hundreds of world leaders, dignitaries and VIPs at Buckingham Palace on Sunday, ahead of the Queen’s funeral on Monday.

The grand reception will see them formally welcomed by the new king in a gathering of world leaders not seen in decades.

It is not clear if Harry and Meghan or Prince Andrew will attend, but all ‘working members’ of the Royal Family will be there.

Kate, who is now the Princess of Wales, Princess Anne and the Earl and Countess of Wessex will also be present.

Male guests must wear lounge suits while women must opt for morning dress, without hats or decorations, in keeping with the sombre tone of the event.

The roughly 500 attendees will meet in the picture gallery and state apartments at 6pm, where they will be served drinks and canapes, reports the Telegraph.

Foreign, Commonwealth and Development Office officials reportedly sent 1,000 handwritten invitations – for both the reception and Monday’s funeral – to heads of state to every country in the world bar Syria, Venezuela, Afghanistan, Russia, Belarus and Myanmar.

In terms of other royals, those expected to show up include: King Willem-Alexander and Queen Maxima of the Netherlands, King Harald V and Queen Sonja of Norway, and Prince Albert II and Princess Charlene of Monaco.

The former king of Spain Juan Carlos, who could soon face trial in the UK for harassing a former lover, and former Queen Sofia, have also been invited.

It is believed the Empress Masako of Japan, who retreated from public view around 20 years ago, will also attend alongside Emperor Naruhito.

Other world leaders include:

– Susan Dougan, Governor General of St Vincent and the Grenadines

Ms Ardern, who said she is planning to attend the Queen’s lying in state at Westminster Hall ahead of the funeral, also confirmed she will meet with Liz Truss.

The visiting PM said the Queen’s death and new King will be the ‘focus of conversation’ when she and Ms Truss meet.

She said she will also likely discuss Ukraine and the UK’s free trade agreement with New Zealand.

‘I am sure we will also transact our relationship as well, but it is all within the context of the week of mourning that the UK is currently in,’ she said.

Meeting William will be an opportunity to repay his support of New Zealand in 2019, when the royal flew to the country following the Christchurch massacre, Ms Ardern said.

‘The Prince of Wales has always been there for New Zealand in its times of grief,’ she said.

‘He’s been there for us in our times of grief and so this is a time for us to be there for him and his family too.’

Several hundred dignitaries from around the world will be in London to pay their respects to the Queen, in what is set to be one of the biggest logistical and diplomatic events in the UK in decades.

No 10 declined to describe the conversations with allies as formal bilateral meetings, and instead portrayed them as chats to offer condolences over the Queen’s death, during which politics is likely to come up.

The Prime Minister’s official spokesman said: ‘There won’t be formal bilaterals in the way we normally recognise them.

‘But we will have a significant number of world leaders, heads of state in the country. She will be meeting a small proportion of those over the weekend.

‘These will be opportunities to discuss memories of Her Majesty, but in some instances it will be the first time they’ve met since she became Prime Minister.’

A UK meeting with US President Joe Biden, who will attend the funeral with First Lady Jill Biden, would ease the pressure on Ms Truss’s expected visit to New York for a UN summit next week.

Chevening will be used as one base for meetings rather than the Prime Minister’s country residence of Chequers, which is said to be undergoing routine maintenance work after Boris Johnson’s exit.

French President Emmanuel Macron confirmed his attendance at the funeral after offering his country’s condolences in a call to the King.

Mr Macron tweeted about the ‘unbreakable’ ties between France and the UK as he promised to ‘strengthen’ the relationship between the UK and France by ‘following the path’ of the late Queen.

It is unclear whether he will be among the world leaders Ms Truss will meet, but if they do it will be a chance for her to clear up where their relationship stands.

During her campaign to become Tory leader, she sparked controversy by saying the ‘jury’s out’ over whether Mr Macron is a ‘friend or foe’.

There have also been suggestions she could speak to Irish Taoiseach Micheal Martin on the margins of the funeral, amid strained relations between the two countries over the continuing row about the Northern Ireland Protocol.

About 500 dignitaries from around the world will head to London for the state funeral.

They will join members of the royal family, UK prime ministers past and present and key figures from public life at Westminster Abbey – which can hold about 2,000 people – at 11am on Monday.

Representatives from the Commonwealth realms – the nations which had the Queen as head of state – will also be able to attend the committal service in Windsor Castle.

Male dignitaries at the funeral will be advised to wear morning dress or dark lounge suits with a black tie, with dark day dresses and hats for female mourners.

National dress may also be worn, while serving military officers can wear ceremonial uniforms without swords.

The leaders of most Commonwealth countries are expected to attend the funeral.

But India’s prime minister Narendra Modi, who landed in Uzbekistan on Friday morning for a meeting with Russia’s President Vladimir Putin there this week, is not expected to come to the UK, with President Droupadi Murmu being dispatched instead. 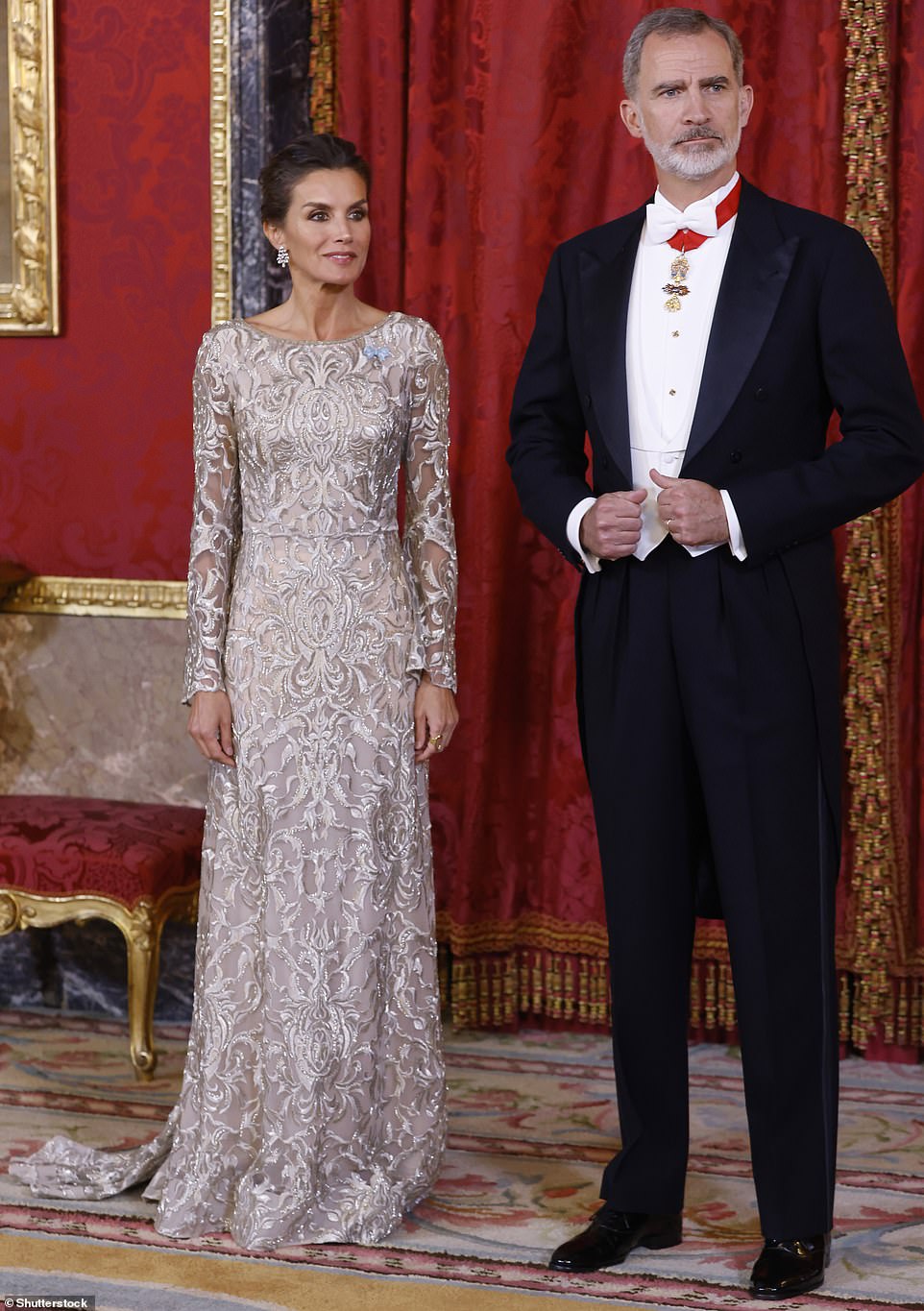 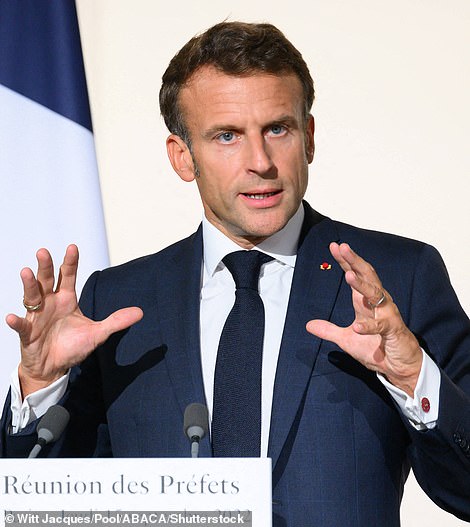 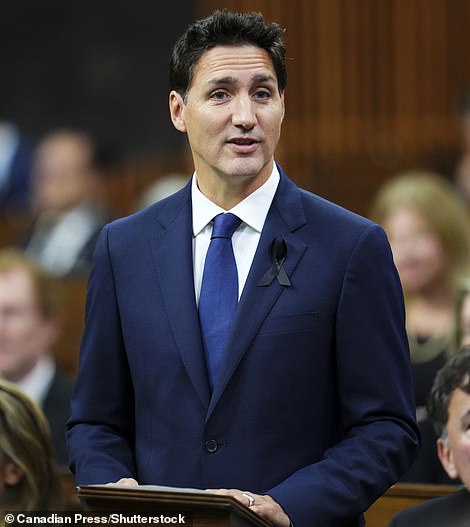 Everyday Brits paying their respects at the Queen’s coffin may find themselves doing so next to the likes of US President Joe Biden or France’s Emmanuel Macron.

The roughly 500 world leaders who are visiting the UK ahead of the late monarch’s funeral on Monday have been invited to visit her as she lies in state at Westminster Hall.

Between Saturday and Sunday afternoon they will be invited to say their goodbyes, but there will be ‘no disruption’ to the public viewing.

Sources told the Telegraph that the VIPs will be given time slots and be facilitated alongside the public queue.

It means mourners who have queued for hours on end could end up paying their respects alongside the King and Queen of Spain or Canada’s Justin Trudeau.

Germany’s President Frank-Walter Steinmeier, Italy’s President Sergio Mattarella and Brazil’s President Jair Bolsonaro are among those attending, along with the president of the European Commission, Ursula von der Leyen.

King Felipe of Spain and his wife Queen Letizia are among the European royals who will attend.

Emperor Naruhito of Japan is also set to travel to London for what will be his first overseas trip since ascending the throne in 2019.

Invitations to the Queen’s funeral have not been sent to Russia or Belarus against the backdrop of the invasion of Ukraine. Taliban-ruled Afghanistan has also been excluded, as has Syria and Myanmar.

The seating plan, which could prove to be highly complicated due to the various protocol and political issues thrown up by a gathering of this size, is yet to be finalised.

China’s president Xi Jinping was invited to Monday’s event but is instead sending a delegation led by vice-president Wang Qishan.

But House of Commons Speaker Lindsay Hoyle has denied a request for the Chinese group to enter the ancient heart of British democracy.

Sir Lindsay has maintained that Chinese state officials should not be able to enter Parliament after sanctioning MPs for condemning human rights abuses against Uighurs.

MPs subject to reprisals including Tory former leader Iain Duncan Smith and Tim Loughton have slammed the ‘extraordinary’ decision to extend an invite to the funeral.

MI5 previously issued an unprecedented warning that an alleged Chinese spy has infiltrated Parliament to interfere in UK politics – and allegedly boasted of lobbying ‘more than 480 MPs’.

And China’s ambassador to the UK Zheng Zeguang has been barred from Parliament since 2021 after MPs and peers were sanctioned by Beijing.

Angry Tory MPs have pointed out that Russia, Belarus and Myanmar have been banned from the funeral.

They argue that China should be blacklisted like other countries facing claims of human rights abuses.

The House of Commons has declared that Uighurs and other minorities in the Xinjiang region are being subjected to genocide.

A number of them have written to Sir Lindsay and his Lords counterpart, Lord McFall of Alcluith, to seek assurances that Parliament’s ban will be upheld.

However, Vice-President Wang is set to attend the Westminster Abbey service on Monday along with other world leaders such as US President Joe Biden and French President Emmanuel Macron.

From Netflix's big flub to Microsoft's cloud attack: Here's the roundup of takeaways and insights from tech’s Q2 earnings reports