The cover of Indonesian news daily Koran Tempo on Wednesday said it all. Portraying people running from a giant book, with the image of Indonesia President Joko Widodo looming in the background, dual hashtag-style headlines warned #SemuBisaKena (All can be affected) and #TibaTibaDipenjara (Jail for everyone).

The book symbolised the new criminal code that was approved in parliament in Jakarta this week, a set of new laws that has triggered alarm in the world’s third-largest democracy and beyond it. 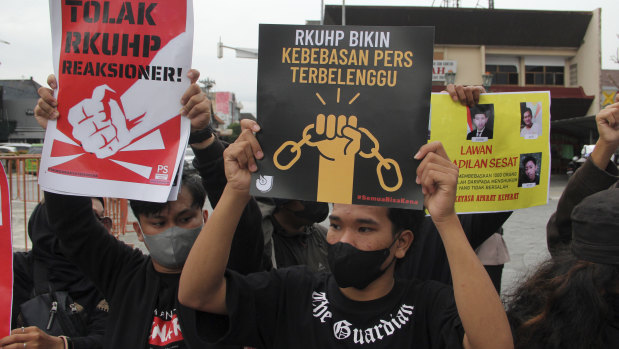 With penalties including potential jail sentences for sex outside marriage, cohabitation between unmarried couples and abortion, as well as toughened provisions around blasphemy, civil society groups fear a human rights disaster, particularly for sections of the community like LGBTQI+ people, who can’t marry in Indonesia, women and religious minorities.

The tourism industry is also aghast, worried that holidaymakers will be turned off, although the complaint-based nature of the no-sex laws – only a close family member of the parties involved can make a report to the police – means few are likely to be affected when they come into effect in three years. Australia’s Department of Foreign Affairs and Trade has taken enough notice to update its travel advisory for Indonesia, though, as a result of the morality-based inclusions in the updated penal code.

Such regulations are representative of the increasing sway of religious conservatism in the halls of power in the Muslim majority but secular nation of 276 million. Indonesia’s vice-president, Ma’ruf Amin, Widodo’s running mate in the 2019 election, is a prominent Islamic cleric. 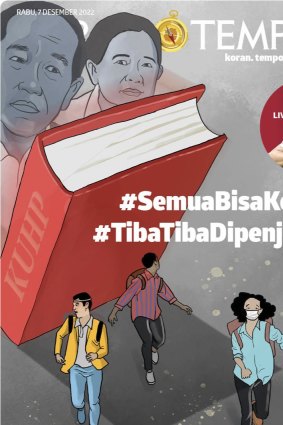 But while the United Nations has flagged concerns about the invasion of personal space, saying certain sections of the code “appear to be incompatible with fundamental freedoms and human rights”, a range of other laws threatening freedom of expression have generated unease.

The blowtorch has been applied to government opponents in particular, making insults against the president, vice-president and state institution a criminal offence that can land perpetrators in prison. Also punishable with incarceration is peacefully protesting without prior authorisation and, in a concerning development for freedom of the press, disseminating information deemed as “fake news”.

It is reflective of a crackdown on dissent and democratic regression that analysts argue has transpired during the presidency of Widodo, known as Jokowi.

That includes a weakening of Indonesia’s famed corruption fighting agency, stripping it of some of its powers and rolling it into the public service.

Indonesia’s controversial electronic information and transaction law, introduced six years before Widodo came to office but deployed with increasing frequency since, has already been used to arrest and imprison internet users adjudged to have defamed the president online. Journalists and activists have also been charged under the broad cyber libel provisions.

“The Jokowi presidency has seen increased pressures on freedom of expression,” said Dr Ken Setiawan, a senior lecturer at the University of Melbourne’s Asia Institute, at a seminar on the new code this week.

She said laws were also being passed too swiftly and with inadequate public consultation, the product of a political landscape in which there is minimal opposition because only two parties sit outside the super coalition Widodo has built.

“This development falls into a larger broad pattern of the politics of democratic decline [in Indonesia],” she said.

That was encapsulated this year when close supporters of Widodo promoted the idea of him extending his time in charge beyond the two-term constitutional limit. 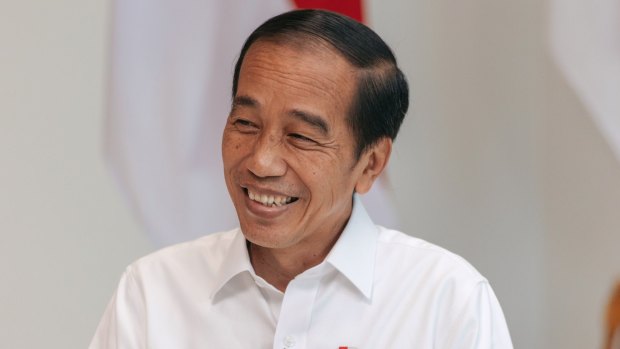 President Joko Widodo, known as Jokowi, has been in office for eight years.Credit:Bloomberg

While the president himself denied he had any such plan and instructed advisors to cease talking about it, Joshua Kurlantzick, senior fellow for south-east Asia at the Council on Foreign Relations in Washington DC, believes Widodo has contributed to the “blossoming” of political dynasties in Indonesia.

“Jokowi will be leaving Indonesia’s democracy in its worst shape in years,” he wrote in May.

Cast as a reformer when he began the first of his two five-year terms in 2014, that characterisation is up for debate as he enters his final full year in office.

He has placed great focus on development and investment, including for his ambitious $US34 billion ($50 billion) vision to build a new city on Borneo that would become Indonesia’s new capital. 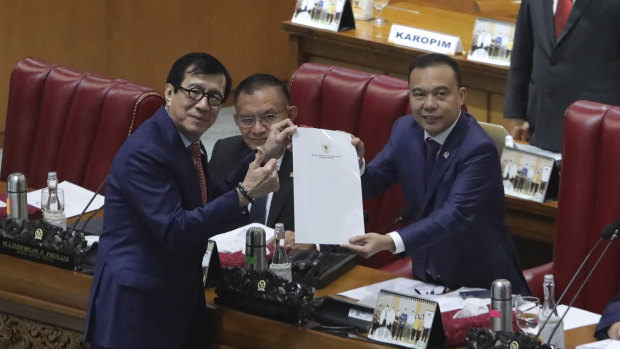 Law and Human Rights Minister Yasonna Laoly, left, poses for photos after the passage of the new criminal code through Indonesian parliament.Credit:AP

But if his reformist credentials are in question, Aaron Connelly, senior fellow for South-East Asian politics and foreign policy at the International Institute for Strategic Studies, argues against thinking about Indonesian politics and politicians in binary terms.

“When we foreigners speak about reform in Indonesia, we usually mean liberal economic and political policies. But when Indonesians talk about Reformasi, they think first of efforts to beat back ‘KKN’—corruption, collusion, and nepotism,” he said.

“Jokowi could not be considered a reformer by the first standard, given his illiberal policies on a range of political issues, though he has implemented some liberal economic policies, for instance reducing fuel subsidies, labour market liberalisation, and on investment regulations.

“But for a lot of Indonesians, Jokowi could still be considered a reformer because he has made progress on infrastructure that had previously been held up by corruption, collusion, and nepotism (though through a very state-led development model).”

The new criminal code won’t be active until well after he leaves the presidential palace in Bogor, West Java and could face challenges along the way in Indonesia’s Constitutional Court.

Law and Human Rights Minister Yasonna Laoly told parliament the government had consulted a wide range of groups, saying: “It’s not easy for a multicultural and multi-ethnic country to make a criminal code that can accommodate all interests”.

There is much apprehension, however, about what lies ahead. “This is not only a setback but a death for Indonesia’s democracy,” Citra Referandum, a lawyer with Indonesia’s Legal Aid Institute, told Reuters. “The process has not been democratic at all.”

Harsono, a former journalist, told the University of Melbourne seminar the passage of the code in parliament was “a sad day for Indonesia”.

“I’m afraid this new criminal code might take a century to be amended,” he said.

“I wish this generation didn’t have to face what my generation had to face under [Suharto’s] New Order. But if things get really bad, keep on resisting.”

Sterling hits its LOWEST level against the euro in 10 YEARS

Brits who self isolate over coronavirus will get sick pay from day ONE, Boris Johnson announces