A Melbourne man who solicited child abuse material has been jailed after asking a father to share images of him abusing his toddler son.

The County Court of Victoria heard Liam James Morrissy was drinking heavily when he used a messaging app to exchange sexually explicit images and videos of children with others a number of times in 2020. 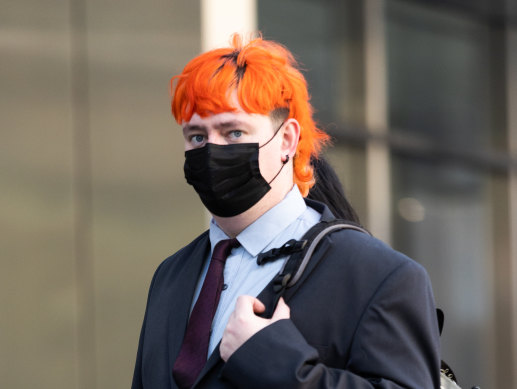 Liam Morrissy outside the County Court of Victoria on Wednesday.Credit:Jason South

When police seized his mobile phone in October 2020 they found 85 videos and photographs, most of which were classified as the most serious kind of child abuse material and involved prepubescent children.

“The fact we all carry in our pockets the actual means to committing this offence is an extraordinary thing,” his defence barrister Tim Marsh said.

On one occasion, he asked a father for images of him abusing his three-year-old son. Other conversations showed Morrissy repeatedly stating he was searching for child abuse material featuring boys aged under 12 and 13, and others of toddlers.

In one chat, he told another user “the younger the better”. He asked another if they had any featuring “tots”.

Other details of what was depicted on the phone – in both files and in requests – are so explicit The Age has chosen not to publish them.

During his police interview, Morrissy admitted he had been accessing and viewing child abuse material for about five years.

On Wednesday, he pleaded guilty to possessing, transmitting and soliciting child sex abuse images and videos between July 13 and August 16, 2020.

The 26-year-old’s husband, who works as a filmmaker, was also present in court.

Morrissy’s barrister said his client’s workplace and family were unaware he had been charged with child sex abuse offences and he risked losing his house and job as a pawn franchise jewellery and diamond assessor if jailed.

A medical report tendered to the court indicated Morrissy was ashamed of his behaviour and found he had “paedophilic interests” and would benefit from therapy.

Judge Damian Murphy said Morrissy’s conduct called for denunciation and he sentenced the 26-year-old to 18 months in jail.

“The accessing and distribution of this material only feeds a market for child abuse,” Murphy said. “A signal must be sent to all those in the community with mobile phones that they are not to be used to solicit, access, disseminate or store child abuse material.”

Morrissy – who grew up with Christian missionary parents before developing drug and alcohol issues – must serve at least six months in prison before being eligible for release on a recognisance release order, which requires him to be of good behaviour for two years.

He was also placed on the sex offender register for life.