Jan, my mother-in-law, is dying. There’s a strong chance that by the time you read this, she will already be gone. The moment has been coming for years – she has untreated terminal cancer – but even so the final decline has been stunningly swift. A few weeks ago she hosted Christmas for a dozen people: making elaborate food plans, doing dishes, dispensing presents, stopping only when we forced her. Her daily nap was about her only concession, and one day she skipped even that to get a haircut. Now, she has no choice but to concede everything.

She wakes in excruciating pain – she says the worst of her life – tempered at first only by a dizzying combination of drugs, and now by large, frequent doses of morphine. That means she’s lucid for ever-shrinking windows of time, being mostly asleep or too groggy or confused to burden with much conversation. 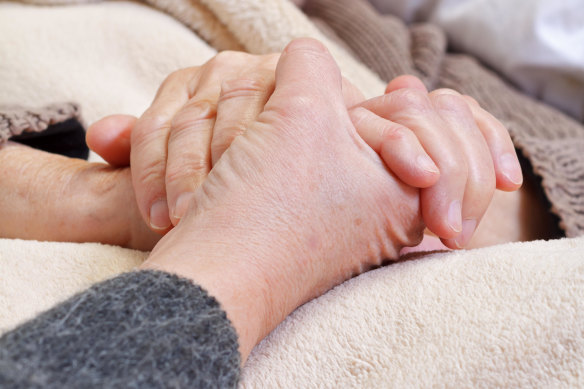 To ignore death is to avoid the thing that makes a truly good life possible.Credit:Alamy

When she sleeps, you can see her impossibly fragile frame expand and contract with every breath. That means you can see her breathing slow dramatically, day by day, as her body shuts down. Now, the time between breaths seems to take an age. Alarmingly so, says my wife. Each lull carries the sense that it might never end. That the next breath might never come.

My father died nearly nine years ago. It was, as everyone says, a deeply disorientating, hollowing experience. But it was also relatively sudden and he was overseas at the time. This is different. It’s one thing to hear of a loved one’s death. It’s another to bear witness to it as the culmination of a final act, to see its inexorable approach. This week, Jan and I spoke and hugged for what we both silently but unmistakably assumed would be the last time. We grasped for words worthy of giving final expression to our love. We said goodbye in a way my father and I never did, and I began the two-hour journey home in tears.

Now, she’s in the constant company of her children, and her sister, who are the only people she wants in the room for her last breath. They tend to her every need, service upon monumental service, knowing it is all ushering things to the same, immovable destination. It is one of the most harrowing, beautiful things in the world.

It’s also one of the most clarifying. The moment of death takes our vast, complex lives, and reveals them to be simple. The people who matter most turn out not to be those we likely spent our lives trying to impress. No one is reciting lists of “achievements”, preferring instead stories of character and virtue: of courage, generosity, humour, selflessness, sacrifice. In short, the kinds of things for which we have scant regard in our public conversation. That, I think, is why even the news seems immature at moments like these.

The values of death are the ones we should live by. They are truer: a kind of final analysis, freed from the distractions and short-term vanity of our daily lives.

Instead, we’re talking about Jan’s attitude of unconditional love, of which my kids are such rich beneficiaries; about the time she bought her siblings a car when their father wouldn’t; about her knack for buying presents (and especially clothes for me) and how only her thoughtfulness makes this possible. People don’t need to be told to focus on such things in these moments. It happens instinctively, as though we spontaneously distinguish what is rich and permanent from what’s thin and ephemeral; that when our souls depart our bodies, it’s only our souls that really matter.

I’m not being original here. We have a million cliches that capture this broad theme. “You can’t take it with you,” we might say about wealth. We talk about what we’ll care about on our deathbeds or what our epitaphs might say. Here, we acknowledge that most of the things we chase – money, fame, strength, power, beauty – are mirages: testaments not to our greatness, but our shallowness. They either become worthless or are taken from us as frailty and weakness overcome us. If what we value in our final moments so often differs from what we value for the vast bulk of our lives, the values of death are the ones we should live by. They are truer: a kind of final analysis, freed from the distractions and short-term vanity of our daily lives.

It’s in this week, in this context, that I came across the story of Ozempic. This is a drug that saves people with type-2 diabetes from heart attacks or strokes, but which also leads to significant weight loss. Accordingly, it is now in critically short supply thanks to celebrities and TikTok influencers who’ve been mowing through it so they can look good. I couldn’t have designed a better illustration of the point, really. It’s not that people are deliberately putting others’ lives at risk so they can pursue their shallowest aspirations. But it seems significant that enough people are prepared to misuse serious drugs for such reasons that they can cause a shortage. This is the logical extension of a culture that thinks it will live forever.

It’s not true to say our culture never talks about death. It’s in our news all the time. But because we don’t let it punctuate our daily conversation, or even our daily thoughts, that’s kind of where it stays. That means it appears almost always as either sensation or tragedy, rather than as what it firstly and most fundamentally is: an inevitability. That’s why just about every great moral, philosophical and religious tradition asks us to place death at the centre of our lives, to ruminate on it often, to make it the starting point of the lives we lead. To ignore death is not to create a culture of life. It’s to avoid the thing that makes a truly good life possible.

As I type these words, my screen obscured by tears, I don’t know if Jan will ever read them or what she’d make of them if she did. I only know that if I end up living a life that can meaningfully be described as good, she will have helped make it possible in the life she led, in the children whose character she shaped and who in turn shape mine, but – not one bit less profoundly – in what she taught me through her death. One day, when the pain is less visceral, when the sadness ebbs more than it flows, the beauty of this moment will remain. That’s her parting gift. All I need to do is accept it.