JILL Biden was seen walking with a crutch and rocking a mini dress after undergoing foot surgery following a Hawaii beach injury.

The First Lady underwent a procedure on her left foot last month to remove debris from a puncture that she suffered during a beach walk. 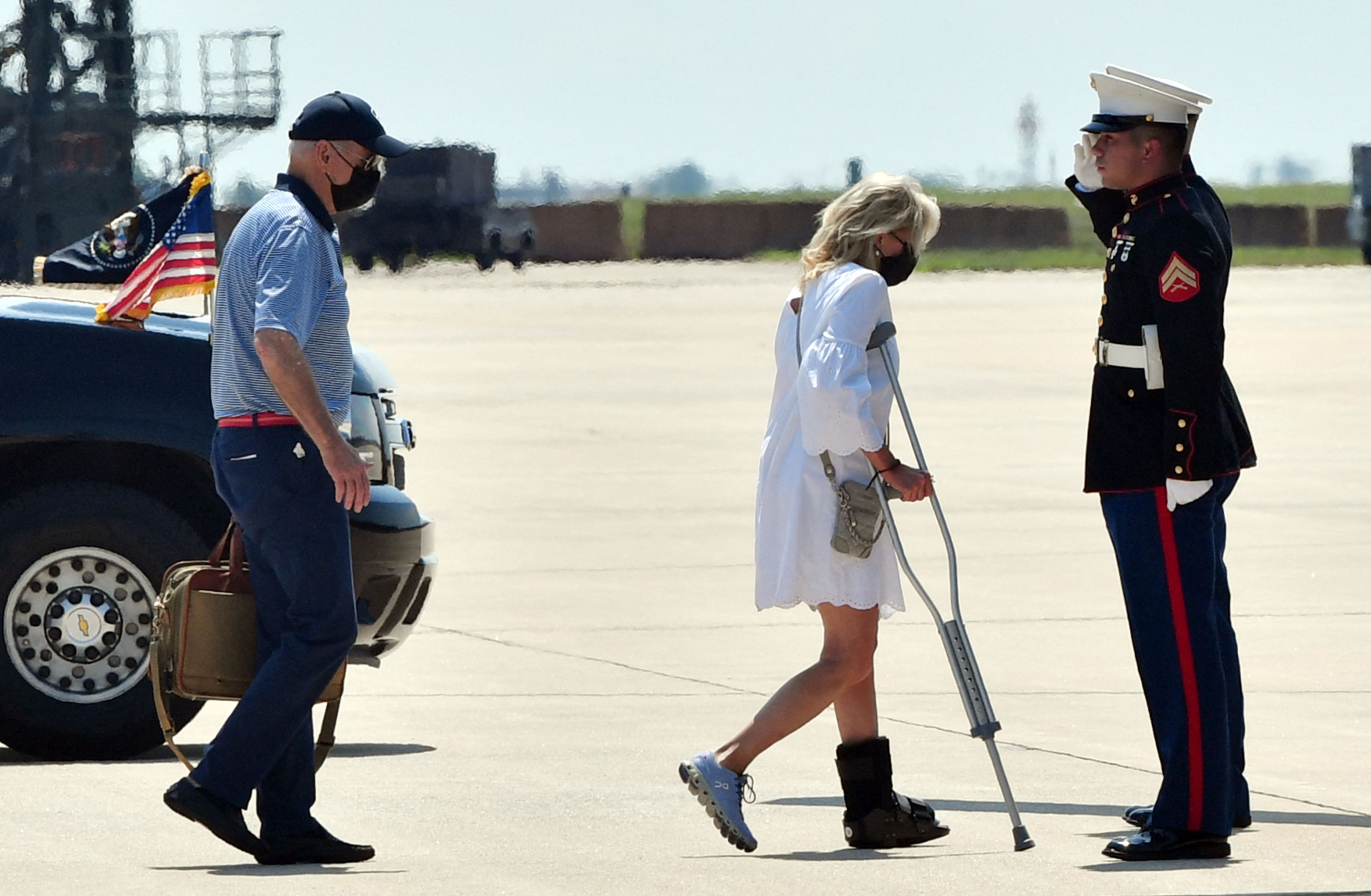 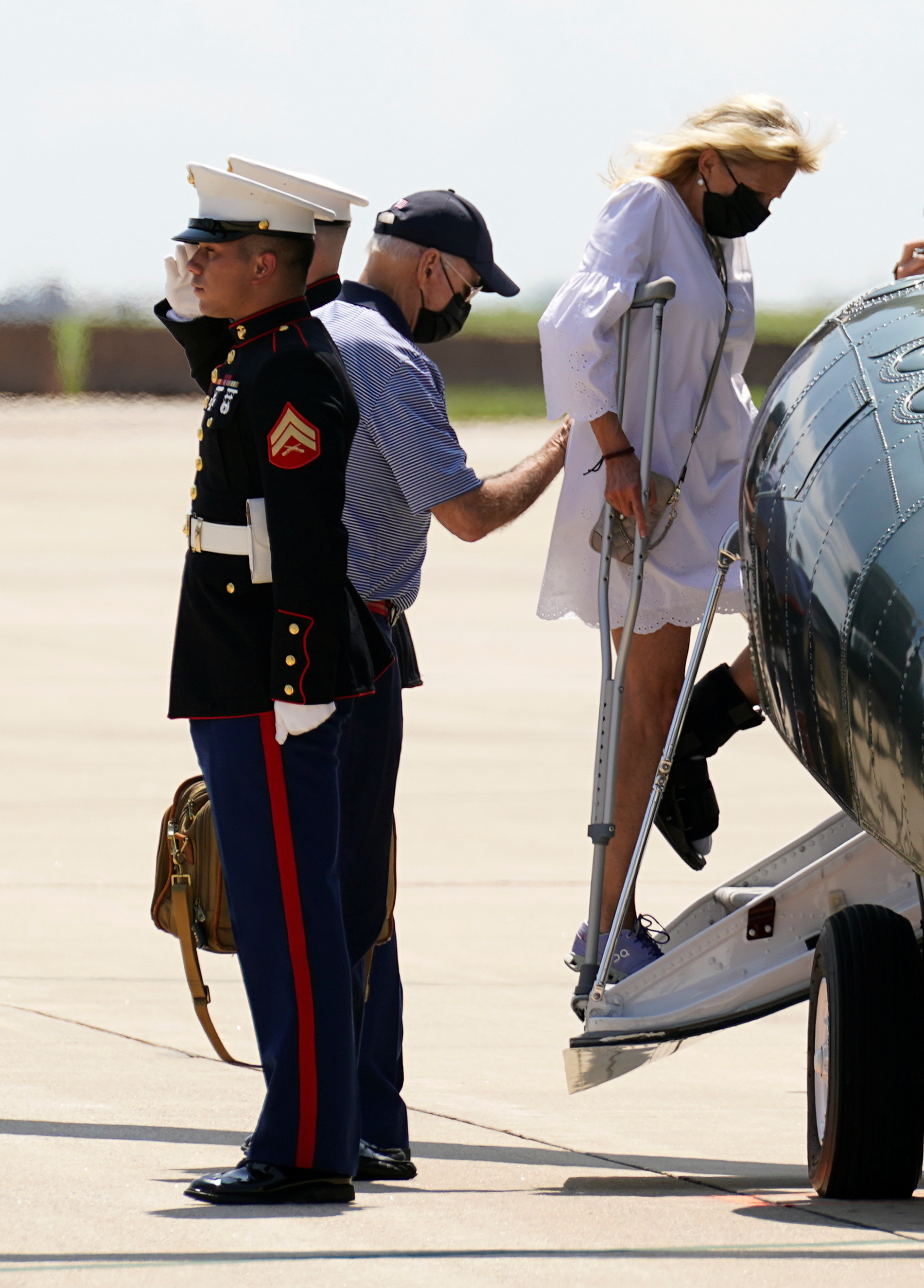 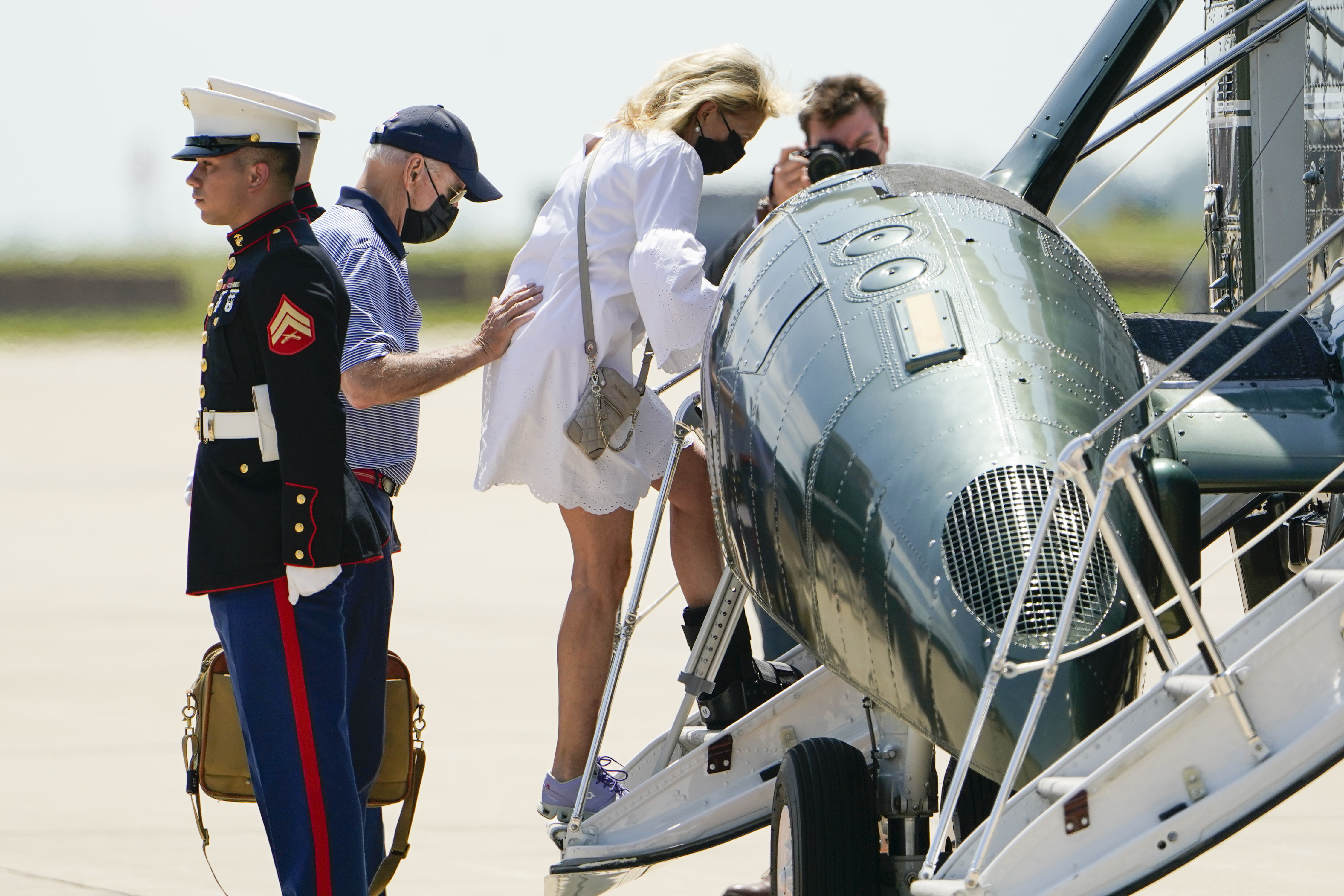 On Friday, the doctor was seen wearing a supportive boot on her left foot, and using a crutch to hoist herself onto the plane.

She was dressed in a white mini dress, with a lilac sneaker on her right. Mrs Biden was also wearing a mask to cover her face.

She was helped onto the aircraft by President Biden, who was also wearing a face covering, alongside a pair of jeans, polo shirt and baseball cap.

The couple was boarding the plane to visit Camp David after a short break in their hometown of Delaware.

Neither the president nor the first lady spoke to reporters as they got onto the aircraft.

Michael LaRosa, press secretary to the First Lady, said at the time of her surgery: "FLOTUS underwent a successful procedure on her left foot to flush out debris from a puncture wound.

"After inspection of the wound by medical staff, it is unclear what object caused the puncture.

"The wound is now clean, free of infection and it is anticipated that it will heal nicely," he continued.

"She and the President will depart Walter Reed en route to the White House shortly."

The first lady, 70, is said to have "stepped on an object on the beach" while visiting Hawaii for an official event.

'STEPPED ON AN OBJECT'

LaRosa previously announced that "last weekend, prior to her two official events in Hawaii, @FLOTUS stepped on an object on the beach which became lodged in her left foot.

"She will undergo a procedure today at Walter Reed National Military Medical Center to remove the object. @POTUS will join her."

Jill had been in Tokyo for the opening ceremony of the Olympics before stopping off to meet military families in Hawaii.

During her time in Hawaii, she also visited a pop-up COVID-19 vaccination clinic in Waipahu before the barbecue at Joint Base Pearl Harbor-Hickam.

In April of this year Jill was said to be recovering after Joe took her for a mystery "medical procedure" in a last-minute schedule change.

It comes after the president fractured his foot while playing with his German Shepherd in November last year.

After an initial examination, Biden was sent to an orthopedist for a CT scan, which revealed the fracture.

Biden was forced to wear the protective boot for "several weeks" after x-rays revealed a "hairline fracture" in his foot.

The White House was then put on the defensive in March regarding Biden's health after he was seen on video tripping on the stairs up to Air Force One. 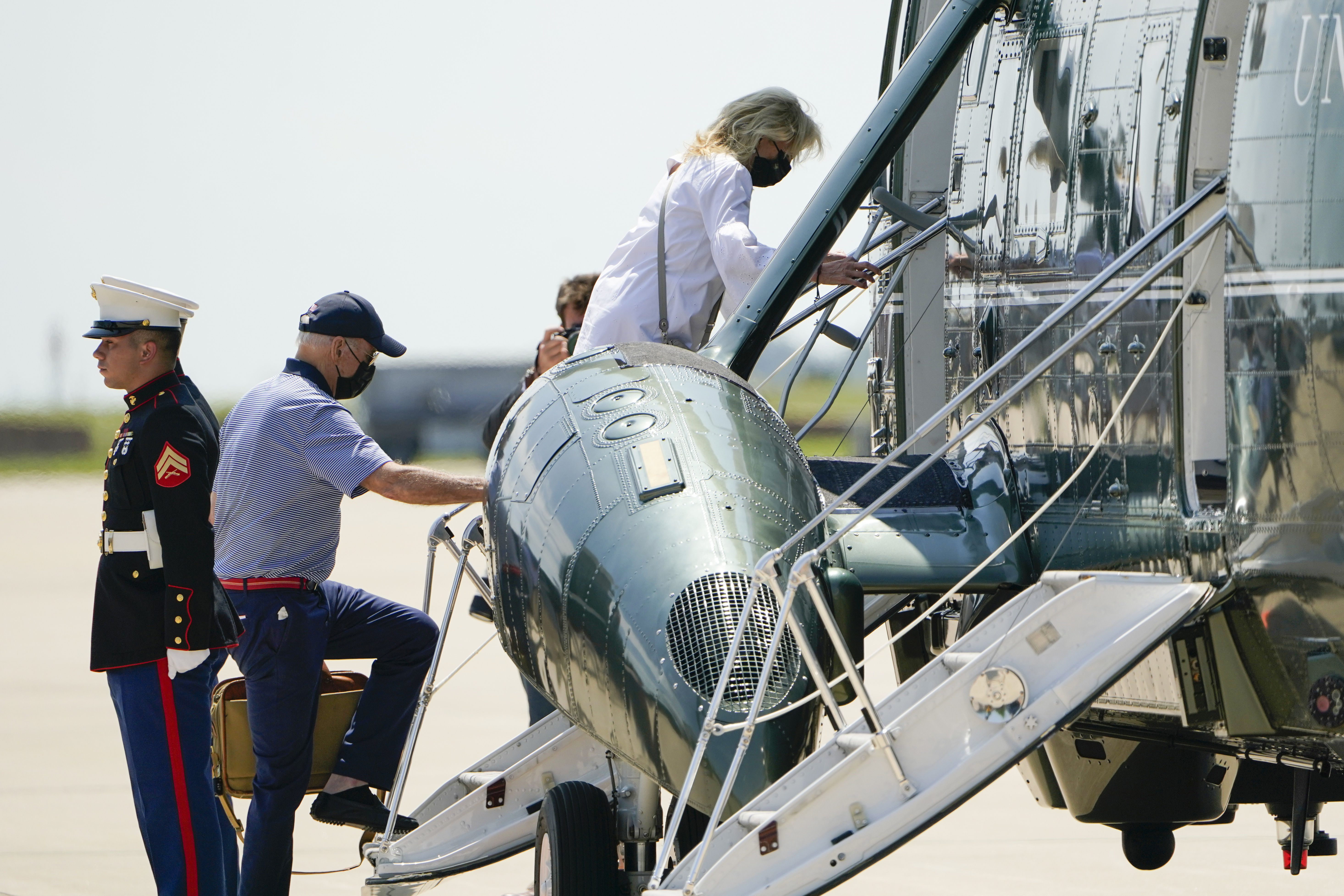 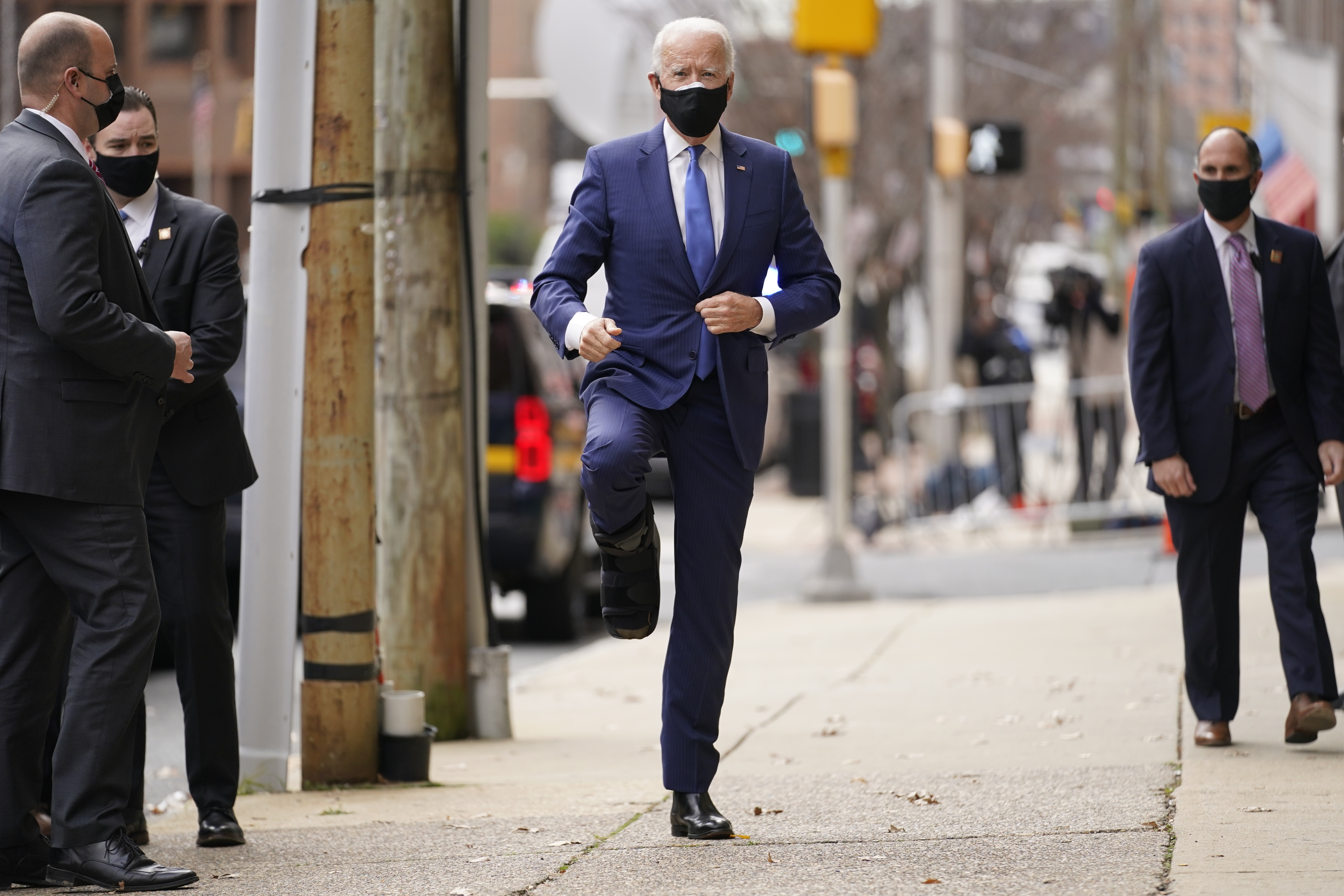 How Egypt targets 'fake news' ahead of elections