Home » World News » Jumping through hoops: the Tokyo Games’ first challenge is getting there

Tokyo: The first thing we noticed was how big the suitcases were. Piled high, three abreast – there are no holidaymakers travelling light at international airports anymore. Just people desperate to get home, those packing for a stint in quarantine hotels, and now, those heading to the Olympic Games.

The world recorded another 535,000 COVID-19 cases on Monday. Inside the Olympic bubble, the task of making sure none of those cases is imported is a fiendish logistical challenge. 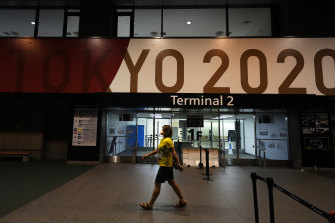 For the government of Japanese Prime Minister Yoshihide Suga, the stakes are high. Japan is grappling with 3000 cases a day just as an extra 20,000 people fly into Narita airport. It cannot afford to have any Olympic infections seep into the community or it risks turning the already unpopular games into a superspreader event.

To protect both its health and its international reputation, the nation’s contact tracing and travel precautions have to withstand the pressure of thousands of travellers coming from every corner of the world.

Here is how The Age and The Sydney Morning Herald made it to Tokyo.

The journey started two weeks before getting on a plane. Daily temperature checks were logged into Excel spreadsheets to show authorities that every traveller is monitoring their health before flying out.

Those in the media pack also mapped out each step they planned to take over their first 14 days in Japan. Each possible location was logged in another spreadsheet and submitted to Japanese authorities for approval. The activity plan is essentially a mixture of Olympic venues and the hotel. No contact with the Japanese public is allowed.

Japan’s over-reliance on cumbersome spreadsheets generated a flood of data for contact tracers and health bureaucrats – and until every details were approved, two critical and compulsory apps did not function, the Infection Control Support System and the Online Check-in and Health report App, known as OCHA for short.

Many of those covering the Olympics have flown in blind into Tokyo’s Narita airport, unaware if their activity plans have been approved. One US journalist, sports freelancer Ayako Oikawa, landed in Tokyo to find out her plan had been rejected. “It was our fault, I’m so sorry,” she was told by Japanese authorities, before being sent for 14 days of quarantine.

The activity plan for the Sydney Morning Herald and The Age was approved 24 hours before departure but unfortunately, the contact tracing apps required by the authorities were not working as the team flew into Tokyo.

There were few Tokyo 2020 signs in Narita, an airport dominated by queues of single-file chairs and other signs saying “high fives prohibited”.

Here, the five-hour game of musical chairs began. The Russian and Irish officials and the journalists were lined up one by one, waiting for the immigration workers in personal protective gear.

Dozens of travellers protested that their apps still weren’t functioning. “No OCHA,” they said repeatedly, as they were waved through by Japanese officials resigned to the technology fail.

Travellers could not eat or drink for two hours before their arrival COVID tests, which made it challenging to fill up a test tube with spit for the rapid antigen saliva test.

“Imagine,” the sign said in the testing booth, next to a photo of some lemon and what could be some fried chicken.

Finally, hundreds were gathered together in a sprawling holding centre for a three-hour wait. If there were any space in the airport where COVID could spread, this would be it. 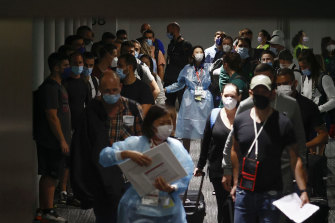 Thousands more Olympic athletes, officials and media will land in Tokyo over the coming days. No doubt many of those who sign the written pledge will be sincere, but without functioning contact-tracing and GPS-tracking apps, Japanese authorities will have to rely far more on goodwill than the enforcement mechanisms than they would have liked.

The next three weeks will reveal if Japanese authorities have done enough or have left their health system vulnerable to infection.

Never miss a medal or great sporting moment with our Olympic update emailed daily. Sign up for our Sport newsletter here.