The Labour leader was seen picking out wallpaper at the department store’s Manchester site, in a subtle dig at his Conservative adversary.

It comes as an incensed Mr Johnson furiously defended himself at yesterday’s Prime Minister’s Questions over the ‘Wallpapergate’ row – in which he is accused of using £58,000 of Tory funds for a lavish refurbishment of his Downing Street flat.

Yesterday a clearly rattled Mr Johnson used Downing Street to insist he paid for the renovations himself and had abided by the ministerial code.

His animated Commons performance sparked an explosion of memes on Twitter, as people poked fun at the politician’s visible fury.

And today, Sir Keir, slightly late to the party, decided to have a go at a humorous take on the row.

It has been claimed that Mr Johnson and partner Carrie Symonds labelled the Downing Street flat – which he inherited from Prime Ministerial predecessor Theresa May-  a ‘John Lewis nightmare’.

And Sir Keir made a subtle dig at the claims by browsing wallpaper at John Lewis at at the Intu Trafford Centre in Manchester. 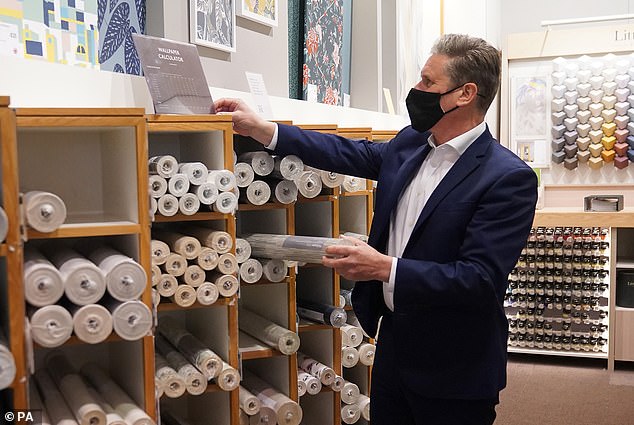 The Labour leader was seen picking out wallpaper at the department store’s Manchester site, in a subtle dig at his Conservative adversary 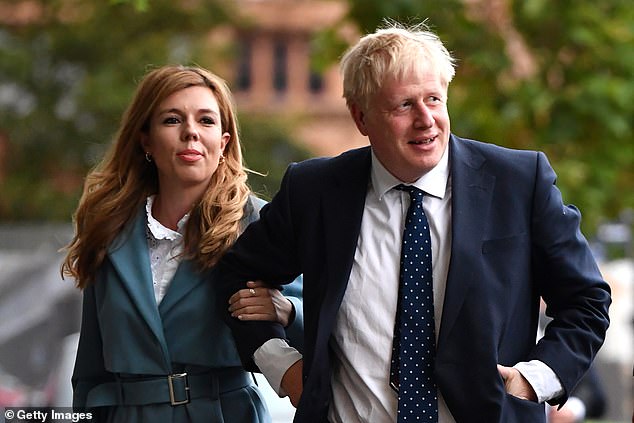 It comes as an incensed Mr Johnson furiously defended himself at yesterday’s Prime Minister’s Questions over the ‘Wallpapergate’ row – in which he is accused of using £58,000 of Tory funds for a lavish refurbishment of his Downing Street flat. PicturedL 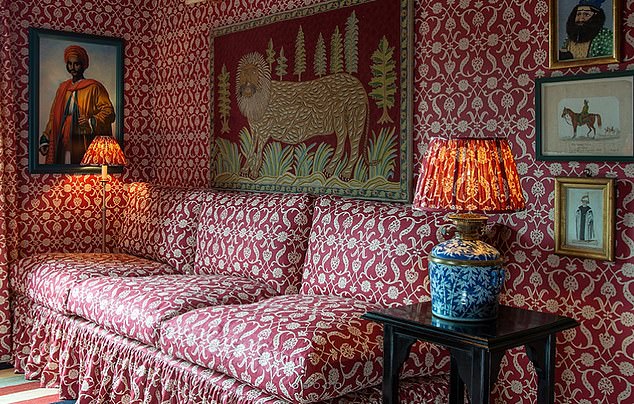 It has been claimed that Mr Johnson and partner Carrie Symonds labelled the Downing Street flat – which he inherited from Prime Ministerial predecessor Theresa May- a ‘John Lewis nightmare’. The Downing Street renovation was apparently spearheaded by Lulu Lytle – one of her designs is pictured here

He was there as part of his campaigning ahead of the local elections in May – an election that will prove a key indicator of the strength of each of the parties.

Mr Johnson meanwhile was on the campaign in London as he teamed up with Chancellor Rishi Sunak on a visit to King Solomon Academy in Marylebone.

Sir Keir’s dig received a mixed reaction on Twitter, with some praising it as ‘top trolling’ and others describing it as ‘childish’.

One said: ‘I’m not sure what he’s trying to achieve here. Sure, he’ll get some praise from usual suspects on here but is this really going to resonate with the voters of Hartlepool?

‘If anything it makes Labour look even more out of touch.’

Another repsonded with their own dig, this time at the collapse of Labour’s so called ‘Red Wall’ of northern seats in the last election, by saying: ‘Just what he needs to paper over that tricky red wall.’

Others struck a more neutral tone, with one saying: ‘Fair play. I don’t particularly like him but his sense of humour has been coming out lately. He’s been quite funny. 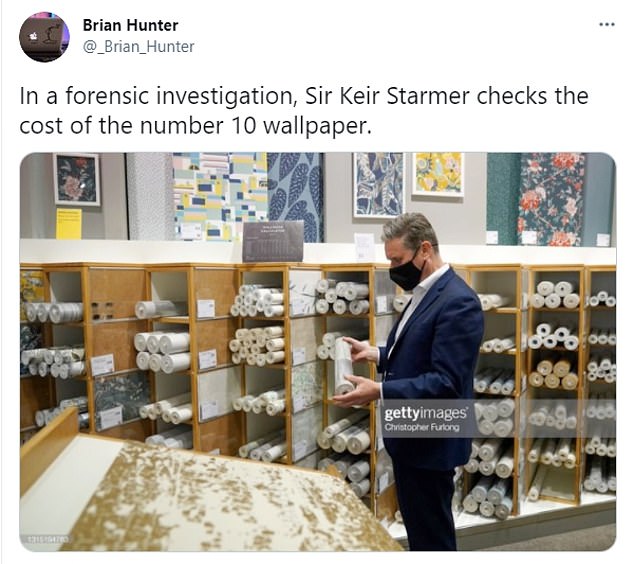 Others praised Sir Keir, with one saying: ‘He’s on a roll.’ And another harked back to Sir Keir’s time as Director of Public Prosecutions, saying: ‘In a forensic investigation, Sir Keir Starmer checks the cost of the number 10 wallpaper.’

Boris Johnson today claimed being portrayed as a snob about John Lewis was his main regret about the huge furore over his lavish Downing Street flat refurb.

The PM insisted the worst thing about the ‘farrago of nonsense’ – which includes an investigation by the elections watchdog into whether the law has been broken – was the misrepresentation of his views about the store chain.

‘I love John Lewis!’ he told reporters on a visit to a school in London, saying he had nothing to ‘worry about’.

The controversial overhaul is said to have been sparked because his fiancee Carrie Symonds could not stand the ‘John Lewis nightmare’ decor left by Theresa May.

The jokey response came as Labour complained to the parliamentary standards commissioner over allegations Mr Johnson failed to declare Conservative contributions towards the works – a charge that could even lead to his suspension from the House.

Downing Street fears that a Tory paper trail could leave Mr Johnson exposed in the separate Electoral Commission probe into the murky funding of his grace-and-favour residence.

The PM and Ms Symonds face handing over emails and phone messages relating to the makeover.

They could also be interviewed – along with former chief aide Dominic Cummings – as the watchdog looks at whether donations to foot the costs were illegally kept secret.

Although the inquiry is currently targeted at the Conservative Party rather than Mr Johnson himself, concerns have been voiced that its records could lead back to the premier.

‘The worry is that there could be a paper trail,’ a government source told the Times. ‘There was a very limited number of people who knew about the funding arrangements at CCHQ. It’s not clear how this will end.’

Mr Johnson said this afternoon that he would comply with ‘whatever’ the Electoral Commission want, but he added: ‘I don’t think there’s anything to see here.’

It comes as Mr Johnson clashed bitterly with Sir Keir yesterday as his crisis deepened after the elections watchdog launched a formal probe into whether ‘offences’ have been committed in the Downing Street flat row.

A clearly incensed PM insisted he ‘paid for the refurbishment myself’ and had abided by the ministerial code despite the Electoral Commission saying there were ‘reasonable grounds to suspect’ the law might have been broken over the controversial No11 refurbishment.

But as Sir Keir demanded he ‘answer the question’ he repeatedly dodged saying whether £58,000 of Tory funds had originally been used for the works, before he repaid the money.

Trying to deflect the attack by saying it was ‘bizarre’ and ‘irrelevant’ of Sir Keir to keep pushing on the issue, Mr Johnson added that he has asked the new independent adviser on ministerial interests to look into whether he needs to make ‘any further declaration’. ‘I look forward to what the Electoral Commission has to say.’

A red-faced Mr Johnson also flatly denied saying that he would rather see ‘bodies pile high’ than trigger another lockdown last Autumn – laying down the gauntlet to anyone who heard it to come forward and say so publicly. ‘I didn’t say those words,’ he said. ‘What I do believe is that a lockdown is a miserable, miserable thing.’

Labour sources trolled the PM over his angry showing, saying it was his ‘Kevin Keegan moment’ – in a reference to the then-Newcastle United manager’s notorious 1996 rant at Manchester United just before his team imploded and lost the championship.

In a statement an hour earlier that heaped pressure on the PM, the Electoral Commission said: ‘We have been in contact with the Conservative Party since late March and have conducted an assessment of the information they have provided to us.

‘We are now satisfied that there are reasonable grounds to suspect that an offence or offences may have occurred. We will therefore continue this work as a formal investigation to establish whether this is the case.

‘The investigation will determine whether any transactions relating to the works at 11 Downing Street fall within the regime regulated by the Commission and whether such funding was reported as required.

‘We will provide an update once the investigation is complete. We will not be commenting further until that point.’ 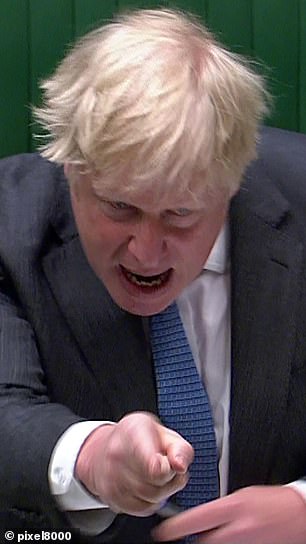 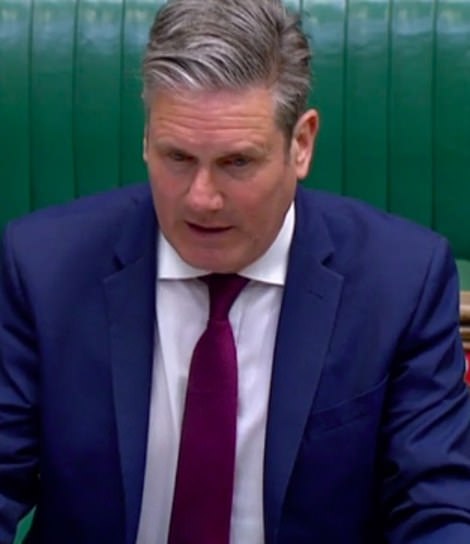 The commission looks at whether the Political Parties, Elections and Referendums Act 2000 has been broken, with most of the offences civil matters and punishable with fines of up to £20,000 – although it can refer more serious abuse to the police. It is not clear what part of the Act the watchdog believes might have been breached.

Investigators can demand documents, information and explanations, and could potentially seek a statutory interview with the Prime Minister as part of the process.

Downing Street insisted the probe is a ‘specific matter for the Conservative Party as a political party’ and the ‘PM hasn’t been asked for information’. But experts believe Mr Johnson personally could have fallen foul of the law.

Asked if Mr Johnson is willing to be questioned in person, his press secretary said: ‘He and the Government will of course be happy to assist if asked.’

Ministers desperately tried to shore up Mr Johnson yesterday as opposition MPs branded him a ‘serial liar’ over the £88,000 flat refurb – including a £30,000 taxpayer contribution – and ‘bodies piling high’ comment.

In another effort to weather the immediate storm, No10 confirmed that Lord Geidt has been new installed as the government’s new independent adviser on ministerial interests. He is launching an inquiry into the flat situation.

Taser vs. gun: How do Brooklyn Center cops wear their weapons?