Sue Giansiracusa said taking her grandchildren, aged between two and eight, to the Bourke Street Mall – along with two of their mums and an aunt – was a bit stressful, but worth it “to see the excitement on the kids’ faces”. 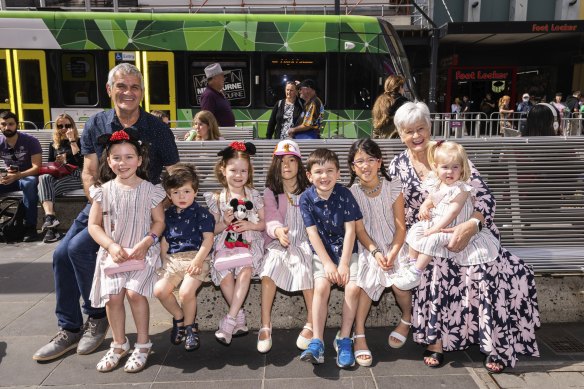 Exciting day out: Charlie and Sue Giansiracusa and their grandchildren visited the Myer Christmas windows.Credit:Paul Jeffers

Giansiracusa, 66, said that as a girl in the 1960s, it was a treat when her grandmother drove her from Robinvale, in Victoria’s north-west, to see characters in the windows inspired by fairy tales and movies.

Giansiracusa and husband Charlie, 72, visited their four children’s families, who all live in Melbourne, from their home in Balranald, 440 kilometres away in southern NSW.

A loud, happy crowd on a warm, sunny Sunday viewed the 2022 displays on the theme of Disney’s centenary. 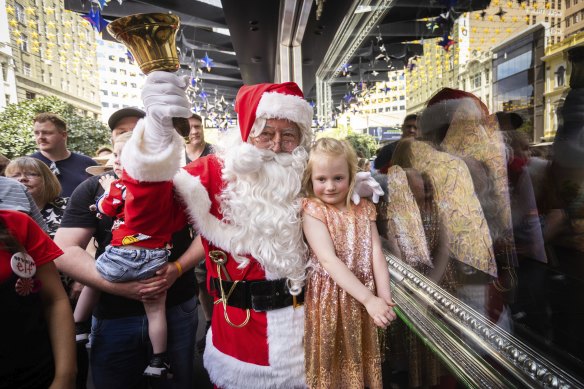 It’s that time of year: Santa Claus with Grace Jenkins, 5, at the Myer Christmas windows in Bourke Street Mall.Credit:Paul Jeffers

A Hawaiian-themed window features Donald Duck in a boat as Mickey and Minnie play music.

In other windows, Mary Poppins rides a carousel, Elsa from Frozen rises from an icy landscape and Rafiki from The Lion King holds the cub Simba aloft on Pride Rock.

Characters Disney has portrayed have been popular themes of past Myer Christmas windows. 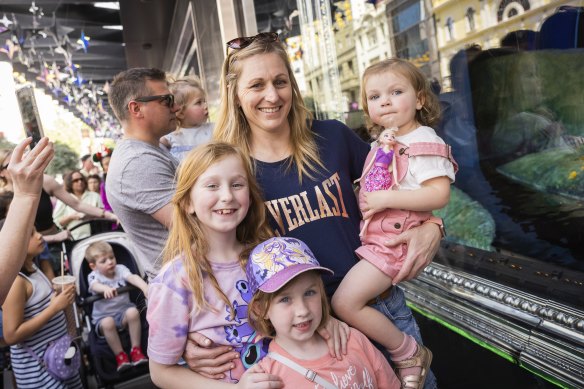 Rachel Lamb-Coulthard, 42, drove daughters Skyla, 10, Penny, 6, and Quinn, 2, from Warragul in Gippsland to see the windows.

Skyla declared them “very cool” and Penny said they were “awesome”.

The pair headed into the Myer Melbourne store, where for the first year since 2019, children could sit on Santa’s knee at Santaland on Level 7. 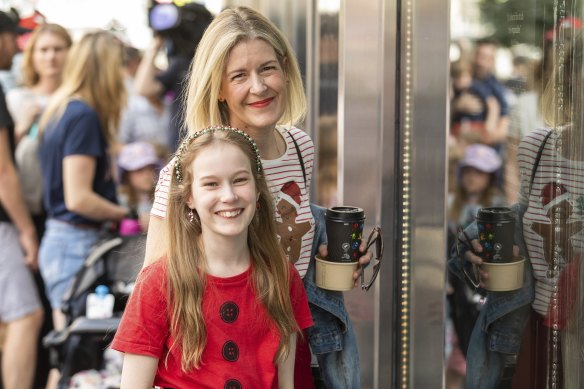 Free events include a Christmas-themed roller-skating rink at Carlton’s Argyle Square, a pop-up playground at Queensbridge Square featuring a giant dance floor and an interactive orchestra.

There will be a 16-metre Christmas tree in Federation Square and projections will appear on Melbourne Town Hall and Flinders Street Station.

Other events include the String Bean Alley Christmas night market at Queen Victoria Market on Monday nights from December 5 to 19, the Christmas Maze in Docklands and the Christmas Carnival at Birrarung Marr.

The Christmas Circus Spectacular at the town hall on Christmas Eve has a $5 entry fee, with proceeds going to a project for the homeless called Make Room.