Weighing less than a bag of sugar, koala joey Dhara is having a check-up.

She and her injured mother were rescued from a Sydney roadside a month ago.

Gently, the vet examines her teeth and eyes. As he lifts her to check her legs and stomach, Dhara chirps briefly.

“She looks great,” says David Phalen, professor of wildlife, health and conservation at Sydney University, before he returns her to her enclosure.

She’s still small enough to try to wriggle inside her mum’s pouch, disappearing into a mass of the soft grey fur.

The pair are some of hundreds of injured koalas tended to by Australia’s largest wildlife rescue organisation, WIRES.

Now, climate change and rapid urbanisation are putting the whole species under threat in the state.

“This is unprecedented. We’re in tipping point times right now,” Prof Phalen says, “They say ‘death by a thousand cuts’ and that’s what’s happening every day. More trees are being cut down, more areas are being built up, we’re having huge fires and all these things eventually will have major impacts not just on koalas but on all the other animals that live in the same habitat that they do.” A recent inquiry warned koalas could be extinct in New South Wales by 2050 unless urgent action was taken.

The report by a cross party committee found the marsupials have been devastated by climate change, habitat loss and disease.

Tracey Maguire is one of the WIRES volunteers who respond to call-outs when animals are in danger.

She says reports of koalas being attacked by dogs or hit on the road are increasingly frequent as humans encroach further into their habitat. 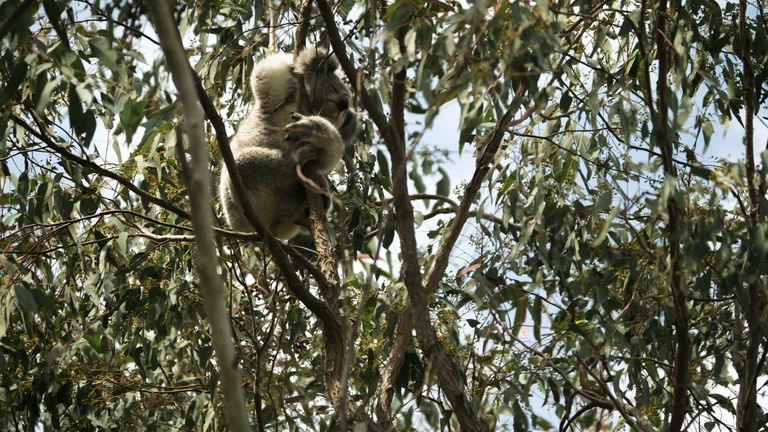 It’s a hot Tuesday afternoon when a call comes in from a resident who has spotted a koala close to a busy road.

The caller doesn’t know if it’s been involved in a crash.

“The first point of what we do is we assess to make sure the koala is fit and fine without any injuries, blood or anything like that,” Tracey explains.

The young animal is leaning in a crook of a tree as cars speed past on the street below.

“Yes, they will climb up a tree if they are injured… The adrenaline kicks in and they just want to get away from whatever it is that’s injured them. They also look at us as predators,” she replies. After careful observation she says it appears unhurt but for safety the team will patrol to make sure it stays away from the traffic.

I ask what she believes is the biggest threat to the local koala population.

“Human pressure is encroaching on their habitats and the more development for housing, the less habitat they actually have. So they are coming into suburban areas and crossing roads. Their habitats are shrinking for humans,” she says. Koalas have become a tense political issue in recent years after developers were granted permission to build homes in an area of western Sydney near to where the city’s last disease-free and thriving colony lives.

“We’re concerned about the koala population in Campbelltown and we understand that there are some serious threats to them as they stand at the moment. We also understand that we can play a vital role in supporting the growth of the population,” says Mark Anderson, senior development management at Lendlease when I ask why they’re building close to the so-called “koala corridor”. 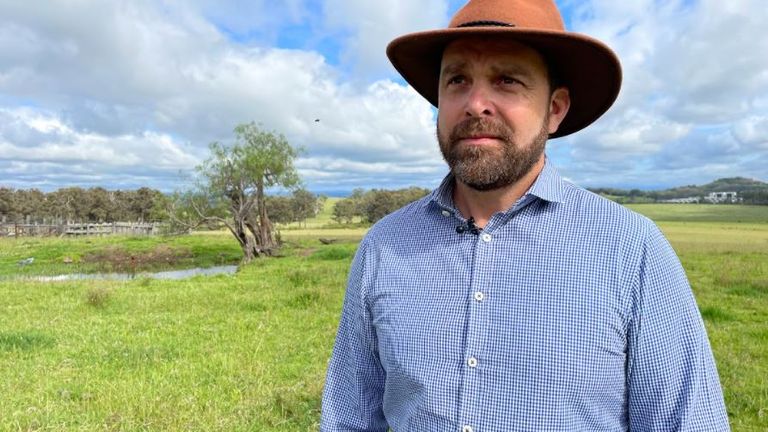 He argues the company hopes to double the number of koalas in the area by adding protections such as underpasses to help them to cross the road, fences to keep them away from dogs and 220 hectares of protected habitat.

In June, the New South Wales government unveiled a $193m fund to protect koalas over a five-year period.

Details of how the strategy will actually save the animals from extinction are yet to be revealed.

In a statement, the Department of Planning, Industry and Environment said protecting koalas is a priority.

“We’re implementing all recommendations made by the NSW Chief Scientist on the protection of Campbelltown’s koalas and their habitat. This includes establishing the Georges River Koala Reserve, securing additional areas of koala habitat and installing koala exclusion fencing to protect koalas from urban areas and major roads. We are also ensuring connectivity and koala corridors are maintained across the region, to make it safe for koalas to feed, move and breed,” a spokesperson added.

Despite the reassurances, campaigners are scathing.

“If you were trying to wipe out koalas in New South Wales, you would do exactly what the New South Wales government is doing. You would find a habitat where they are surviving and succeeding and you would start to declare that as housing as well, and you’d start to wipe out that habitat,” says Saul Deane, campaigner at Save Sydney’s Koalas, “This is the area that koalas need. We can live in other places, they can’t.”

The nation’s much loved marsupial are in rapid decline, dropping to a maximum of around 57,000 across the country since 2018, according to figures from the Australian Koala Foundation.

In the last three years, it’s feared New South Wales has lost 41% of its koala population.

Unhindered, pressures including drought, disease and development could mean they disappear completely.