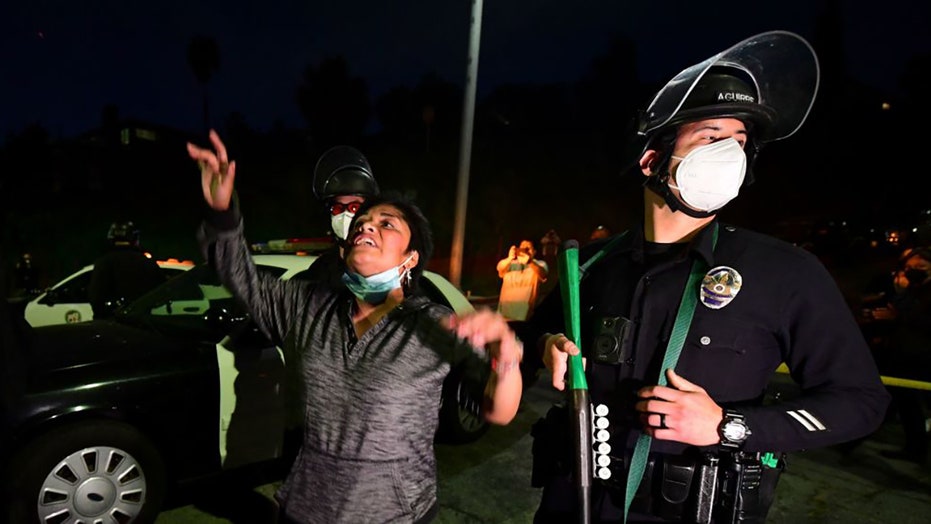 Los Angeles police clashed with hundreds of protesters on Wednesday as officers moved in to close Echo Park’s massive homeless encampment, according to authorities.

The demonstrators — a mix of homeless people and activists — threw bottles and objects at officers, who attempted to push them back from the park, according to reports. Many refused to move and some chanted: “Whose park? Our park!”

“Two unlawful assemblies were declared and dispersal orders were issued … due to officers being assaulted with rocks, bottles, and smoke bombs,” the Los Angeles Police Department (LAPD) wrote on Twitter.

Others decided to leave as police officers in helmets and batons moved in and told demonstrators to clear the area, according to the Los Angeles Times. 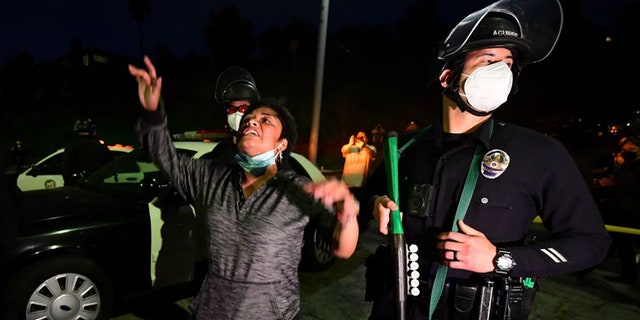 Social activists and supporters of residents of a homeless encampment face police arriving on scene at Echo Park Lake in Los Angeles, March 24, 2021, ahead of a planned and announced cleanup of the encampment as part of an estimated half-million-dollar City of Los Angeles cleanup and repair effort. (Photo by Frederic J. BROWN / AFP) (Photo by FREDERIC J. BROWN/AFP via Getty Images)

“I just want to get out of here, it’s getting crazy,” Edward Juarez, a resident at the encampment, told the paper.

The department denied social media reports that officers used tear gas during the clashes. “These reports are completely inaccurate. There is NO tear gas being used,” the LAPD wrote.

As of 11:45 p.m local time, authorities remained in the area as fencing was being installed, according to Los Angeles Police Chief Michel Moore. He said people already inside the park will be allowed to stay overnight and no one else was allowed to enter. 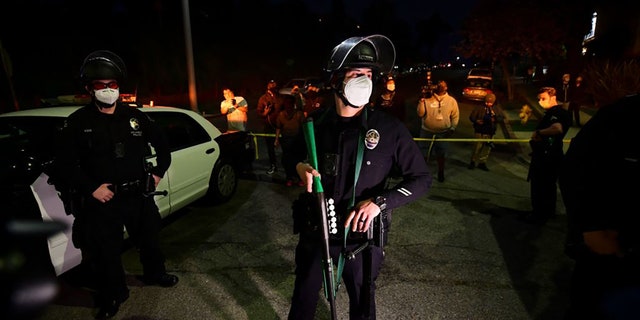 An LAPD officer holds a rubber-bullet gun on scene at Echo Park Lake in Los Angeles, March 24, 2021, ahead of a planned and announced cleanup of the encampment as part of an estimated half-million-dollar City of Los Angeles cleanup and repair effort. (Photo by Frederic J. BROWN / AFP) (Photo by FREDERIC J. BROWN/AFP via Getty Images)

Those still in the park will be given a 24-hour notice to leave, Moore added.

The LAPD was asked to support community safety efforts during the installation of the fencing “to assist in the rehabilitation of Echo Park,” according to Los Angeles City Councilman Mitch O’Farrell.

“Department personnel are deployed in that area so that those efforts can begin in a safe and unimpeded manner,” he wrote on Twitter. “Our homeless service providers will return tomorrow morning to continue their work with the park’s unhoused residents to offer shelter and services to anyone who wants and needs the assistance.”

City officials had been planning to clear and fence in the park, which homeless people have populated over the past year. The growing encampment reportedly left residents frustrated over the potential danger they face at the park, as well as the city’s response to it.

O’Farrell’s office said the city was closing the park for an estimated $500,000 worth of repairs, according to the station. A group of encampment residents and activists held a vigil earlier on Wednesday, reports said.

EU threatens to dig in over Ulster border checks row