Last remaining survivor of British WWII warship that was sunk by German U-boat – who spent 16 hours in the water singing ‘There’ll Always Be An England’ before he was plucked to safety – dies, aged 99

The last remaining survivor of a British warship sunk by a German U-Boat during WWII who sang ‘There’ll Always Be An England’ for 16 hours before being rescued has died aged 99.

Reg Bishop was among 568 sailors who were rescued after HMS Hecla was sunk by German torpedoes in an attack near Morocco which killed 281 of their crewmates on November 11, 1942.

He slid down a rope off the ship and clung to a liferaft when ‘out of the darkness’ he heard a voice sing the patriotic tune popularised by Vera Lynn.

He and his crewmates joined in with the singing to keep their spirits up before being plucked to safety by another British warship. 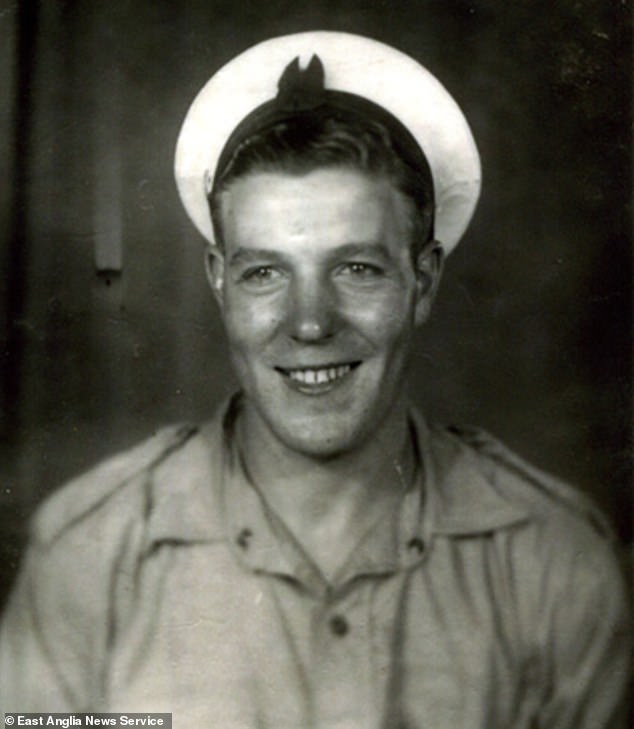 Reg Bishop sang ‘There’ll Always Be An England’ for 16 hours after the the HMS Hecla was torpedoed by a German U-Boat in WWII. He was the last remaining survivor of the warship  has died aged 99 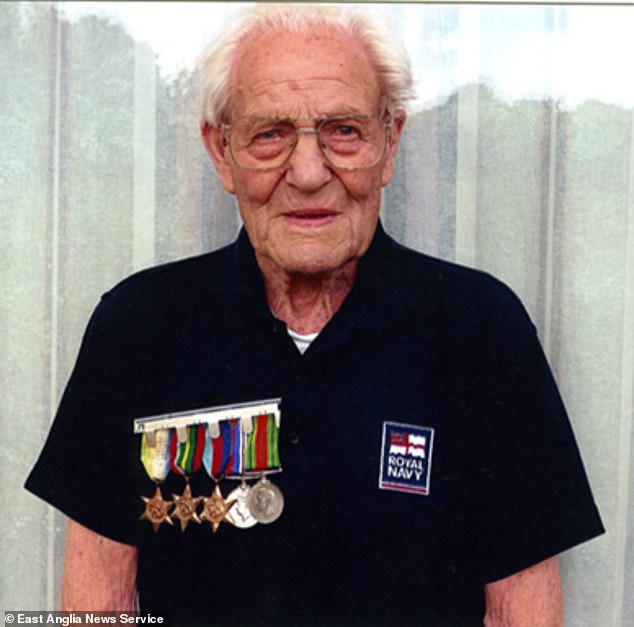 Mr Bishop remained active well into his 90s, and the only thing stopping him from attending his regular Mecca Bingo nights was Covid restrictions. His daughter in law Mary Bishop described him as a ‘tower of strength for the whole family’

After 16 hours Mr Bishop and his crewmates were saved by HMS Venomous, whose crew lowered a scrambling net over the side of the ship.

After climbing on board they then offered him a cup of tea and a tot of rum.

The father-of-three – described as a ‘tower of strength’ by his family – lived nearly 80 more years before he died earlier this month at his home in Cawston, Norfolk.

He remained an active person well into his 90s Covid restrictions eventually slowing him down by stopping his regular visits to the Mecca Bingo hall in Norwich.

Mr Bishop recalled how he was asleep in his hammock when the 11,000 ton destroyer tender HMS Hecla was struck by the first of three torpedoes off the coast of Morocco in North Africa.

He quickly got dressed up and rushed to man one of the ship’s in pitch black darkness.

Mr Bishop remembered: ‘My pal, Herbert Barker, had been sleeping on the upper deck when we got hit.

What is the history of the WWII warship HMS Hecla and how did it sink?

‘He was wearing just his underwear and the water had come over the side and soaked him. I remember taking my coat off and giving it to him. I never saw him again.

‘I remember everything was calm, no panic, and I slid down into the water from the starboard side on a length of rope.

‘I was alongside the ship and remember swimming to get away from it.. I had my inflated life belt on and those without them perished.

‘We were then hit by two more torpedoes which hit the opposite (port) side of Hecla. I just wanted to get away from the ship before she went down.’

Mr Bishop recalled how HMS Venomous and another warship HMS Marne were dropping depth chargers to try and destroy German submarines in the area.

He said: ‘When they went off, it felt like being kicked in the stomach. The Marne stopped to pick up survivors and was hit in the stern by a torpedo but she didn’t sink.

‘We heard a voice through a loudhailer from HMS Venomous telling us they would pick us up in daylight.

‘Some in the water tried to get aboard HMS Marne but I didn’t attempt it in case she went down. I was desperate to get away from both ships and managed to do so.

‘Although I couldn’t see much in the darkness, I was in the water surrounded by other sailors.’

Mr Bishop eventually managed to grab hold of a Carley float liferaft, which became submerged in the water as there was so many men clinging to it.

He added: ‘One of my vivid memories was hearing a single voice loudly sing out of the darkness ‘There’ll always be an England…’.

‘Others joined in with the singing and I joined in too. I don’t recall any panic or fear that night, just waiting to be picked up and dozing every now and then.’

Norfolk-born Mr Bishop worked on a poultry farm and in the building trade before enlisting in the Royal Navy in 1942.

He trained at HMS Ganges in Shotley, Suffolk, and then in Chatham, Kent, before joining HMS Hecla. 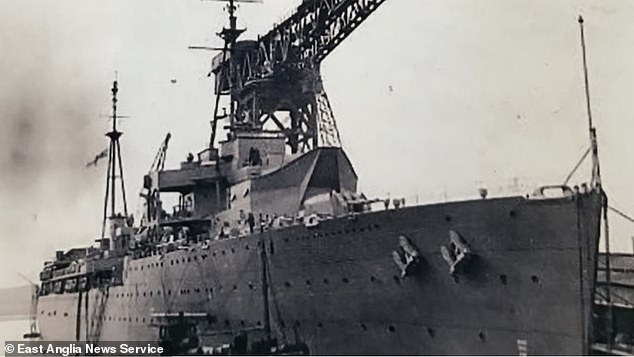 He left the Royal Navy in 1946 and went on a painting and decorating course in Letchworth, Hertfordshire, where he met his first wife, Peggy who died in 1976.

Mr Bishop married his second wife, Diane in 1982 after meeting while working at the Bernard Matthews turkey factory in Great Witchingham near Norwich.

He later worked as a painter and decorator before helping out as an MOT assistant at his son Tim’s garage in Felthorpe until he was 85.

His daughter-in-law Mary Bishop described him as a ‘non-judgmental and easy-going’ man.

She added: ‘He loved to talk. He could strike up a conversation with anyone about anything.

‘He led a remarkable life and he was a tower of strength for the whole family. He would help any of them.’