Victorian Liberal leader Michael O’Brien insists he is the right person to take the fight to Premier Daniel Andrews as he prepares to face a likely leadership challenge on Tuesday morning.

Little-known frontbencher Brad Battin – who holds the shadow portfolios of youth justice, crime prevention, victims support, roads and road safety – is expected to mount a challenge in the party room on Tuesday morning and has promised to fight Mr Andrews more fiercely, advocate for small businesses and create new portfolios to boost the party’s prospects. 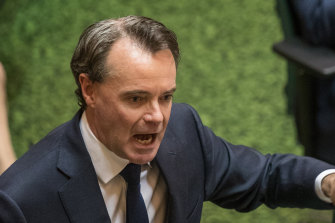 The Age revealed last month that Mr O’Brien was likely to face his internal foes in the sitting weeks leading up to the May budget and Mr Battin’s potential challenge has exposed bitter divisions within the parliamentary team between those backing Mr O’Brien, those supporting the challenger, and those who want to see former leader Matthew Guy reinstated before next year’s November election.

Groups of Liberals were meeting into the night on Monday in preparation for the party room meeting at 8.45am.

There was talk on Monday of a last-minute move from the Guy camp to capitalise on the moment of instability and see him put his hand up at Tuesday’s meeting. The plan would be driven by his supporters’ fears that a win by Mr Battin would make it extremely difficult for Mr Guy to return to the leadership.

But late on Monday night, it emerged that Mr Guy and his supporters will probably block Mr Battin’s push, which would make a challenge unlikely to succeed. 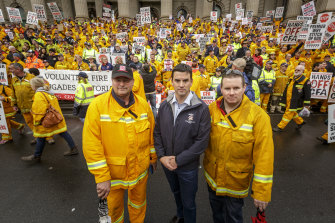 Mr O’Brien spent Monday with his close supporters, attempting to fend off the challenge by Mr Battin, who surprised many colleagues on Monday when he phoned them asking for their support to topple their leader.

Frontbencher Ed O’Donohue said getting rid of Mr O’Brien would be a “big mistake” and the party leader himself appeared sure of victory as he left his Spring Street office on Monday afternoon.

“I’m confident my leadership will be supported by my party and I don’t think the spill motion will get up,” said Mr O’Brien, who has been in the job for little more than two years.

Mr Battin’s camp, who spent Monday in a “war room” of their own after weeks of covert planning, are confident of success and believe they have 11 confirmed votes against Mr O’Brien’s nine. Sixteen votes – a majority of the 31 Liberal MPs – are required for victory. 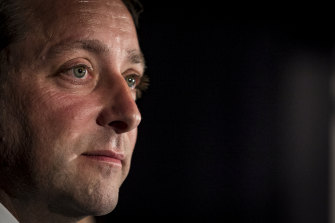 Former opposition leader Matthew Guy, pictured conceding defeat in the 2018 election, has been touted as a contender.Credit:Chris Hopkins

Mr Battin criticised the current leadership when pitching to colleagues. He said Mr O’Brien had walked away from fights on tax reform, health and education.

Mr Battin is not running on a leadership ticket with a deputy. He told MPs he would create new portfolios that better reflected the issues facing voters and promote energetic MPs to the frontbench.

“If you never have a fight, no one will ever talk to you,” one MP quoted Mr Battin as saying.

The tight margins mean the votes of about five backers of Mr Guy – including Beverley MacArthur, James Newbury, Tim Smith and Craig Ondarchie – will probably decide whether Mr O’Brien loses the top job.

Members of this group, who have been the main agitators against Mr O’Brien, were kept in the dark about the fresh plan to oust their leader, with some members learning of the news via Twitter.

A senior Liberal said Mr Guy’s backers could vote for a spill motion to succeed at a party room showdown beginning at 8.45am, meaning the leadership would be declared vacant but then vote for Mr O’Brien in the head-to-head contest against Mr Battin.

This strategy would wound Mr O’Brien’s authority and in effect be a vote of no confidence in his leadership. But it would also act as a repudiation of Mr Battin and keep a weakened Mr O’Brien in the chair, laying the foundations for a future challenge by Mr Guy, who has consistently denied he wants to return to the leadership.

There is a small chance Mr Guy will decide to run if a spill motion is successful, or that another MP puts their hand up.

One state MP, who predicted the spill motion would fail, said: “This is being driven by people whose ambition exceeds their ability. They are going to fail.”

Another senior Liberal said: “The hillbillies are trying to take over the joint.”

Another MP said if the Guy camp did not back the push, they would be seen as hypocritical having worked to destabilise Mr O’Brien for months.

Another source familiar with the numbers within the party room said Mr Battin would not be successful. They said leadership challengers often fail in their first attempt, and they believed the process would weaken Mr O’Brien’s leadership and open him up to a challenge from Mr Guy closer to the election.

The party’s senior MPs, including Mr Battin, met for a shadow cabinet meeting late on Monday morning. After the meeting, Mr Battin began phoning his colleagues to inform them of his run.

Mr Battin’s key supporters include Ryan Smith, Richard Riordan, Bridget Vallence and Roma Britnell. The group believes it has a wider cross-section of internal support than backers of Mr Guy.

Mr O’Brien’s backers are generally longer-serving MPs from the faction of the party aligned to state president Robert Clark, while his opponents tend to be aligned with federal MPs, including Treasurer Josh Frydenberg and Housing Minister Michael Sukkar, who oppose Mr Clark.

Mr Battin is expected by his supporters to be more popular among suburban and multicultural voters than Mr O’Brien, who colleagues believe has not communicated effectively with these groups.

Mr Battin, a 45-year-old father of two who gained prominence campaigning against the Andrews government’s reforms to the Country Fire Authority, is one of the party’s only MPs who represents an outer-suburban seat – Gembrook – which he won from Labor in 2010.

He was a police officer between 2001-2007 before becoming a Bakers Delight franchisee until 2010 when he entered parliament. He was a parliamentary secretary for the environment in the Napthine government.

An Andrews government source said Mr Battin had a common-man earthiness that would contrast positively against Mr Andrews’ style.

One senior Liberal source said: “He’s not got the best policy mind but he speaks well, he’s got passion about him and he appeals to the suburbs where the political centre lies.”

Mr O’Brien took over the party at one of its lowest points after the 2018 election thumping. He has faced internal criticism for his approach during the pandemic, through which he has struggled to take advantage of the prolonged lockdown caused by COVID-19 seeping from quarantine hotels.

An Ipsos poll published by The Age in October showed 15 per cent of Victorians surveyed approved of the Opposition Leader’s performance during the pandemic. Mr Andrews had a 52 per cent approval rating.

Some Victorian Liberals have been worried that the result of the election in Western Australia – where a Labor premier who hogged the limelight during the pandemic reduced the Liberal Party to two seats – could foreshadow a similar drubbing at the next election.

Former premier Jeff Kennett, who is rumoured to be weighing up a run for state president against Robert Clark, told The Age on Monday that the WA wipeout could be repeated in Victoria if the Liberal Party did not improve its performance and select better candidates. He said a leadership change might not occur until “much closer” to the November 2022 election.

NHS hospital worker, 42, with ‘heart of gold’ dies from coronavirus