A 19-year-old law student has won his first court case while still at university – after using his textbooks to take on a landlord over his ‘unfit’ university halls.

Undergraduate Jack Simm sued his landlord for an alleged breach of contract over his flat being ‘like a construction site’ when he first moved in September 2020.

Mr Simm, then a fresher at the University of East Anglia (UEA), spent a year fighting the case and has now won – while still in his second year.

He said winning the case was ‘perfect revision’ for his law degree. 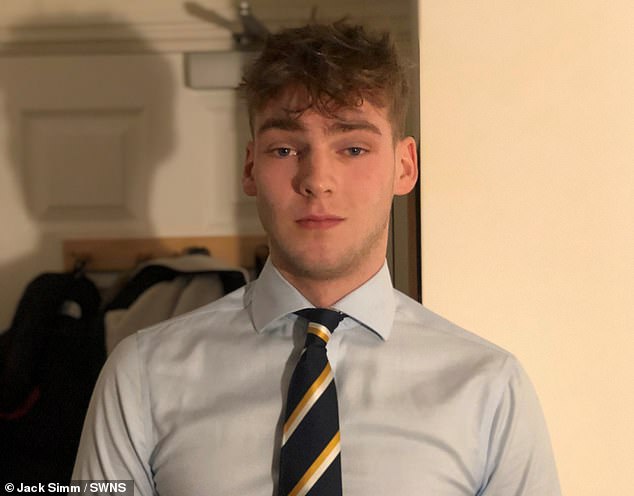 Ahead of his one-hour hearing at a civil court last month, Mr Simm referred to statutes and case law that he’d learnt in his studies to build a 10-page legal claim for a refund on his deposit and first month’s rent – amounting to £859.

He successfully sued the company behind Velocity Student accommodation for breach of contract following a string of problems with the accommodation.

‘Funnily enough while the case was going on, I was studying contract law so I flipped open the textbook and went over the notes.

‘I was in a real situation with real consequences. I was thrown into the deep end.

Winning shows that I can do it. It’s given me a massive confidence boost.’

Mr Simm argued that his landlord was in breach of contract as the first-year accommodation in Norwich, Norfolk was not fit to be lived in.

He claimed there was no heating or Wi-Fi, dust everywhere and builders still working in the accommodation, which Jack did not visit before arriving as he joined UEA through clearing just days before the start of term.

Mr Simm stopped paying his rent after just a week as the landlord ‘didn’t rectify the issues’ – he then started building his legal case.

The undergraduate, from Newcastle said: ‘We drove down and arrived at this place and it looked more like a construction site than a place to live.

‘In my room the floor was covered in dust and there were loud noises from people hammering away.

‘It was freezing at night with no heating. A smell was coming out of nowhere.

‘We gave the landlord a week to sort everything out and at the end nothing had been resolved so I moved out and handed my keys in.’

Jack added: ‘Other people are more lenient and they just get taken through the long grass [by complaining].

‘The most taxing part was making sure the case was tight. I kept tweaking the case right up until the court date.’

On November 2, Newcastle County Court ruled in Mr Simm’s favour and ordered that he be paid £859 to cover his deposit and first month’s rent.

The court also ordered the landlords to pay £140 in court fees.

Girl, 8, dies after she was ‘tied up in sleeping bag for wetting the bed’