COMPIEGNE, France (Reuters) – One hundred years after the guns of World War One fell silent, the leaders of France and Germany held hands and rested their heads against one another in a poignant ceremony to mark the signing of the Armistice peace agreement. 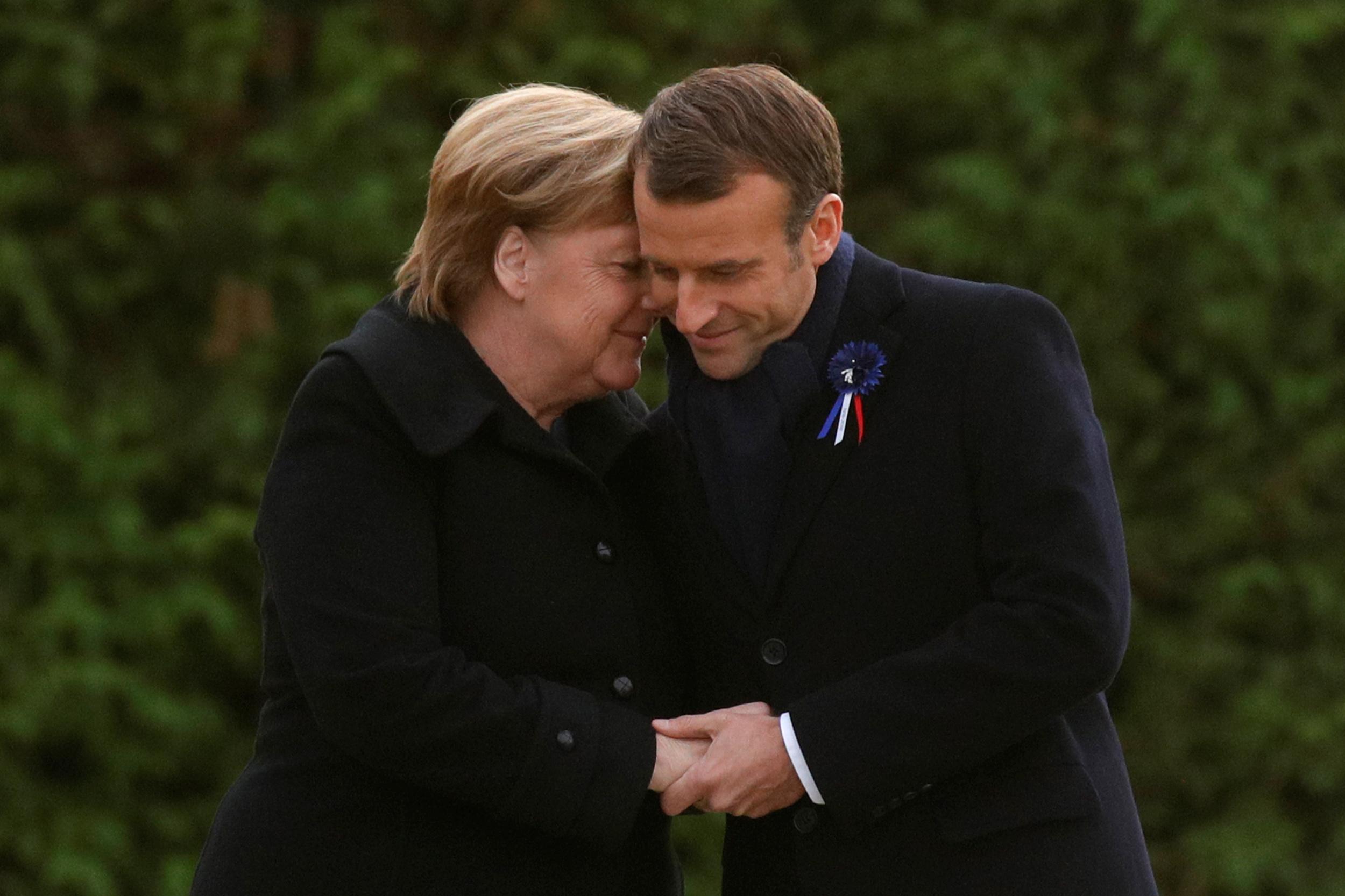 President Emmanuel Macron and German Chancellor Angela Merkel inspected troops from a joint Franco-German Brigade before unveiling a plaque paying tribute to the reconciliation and renewed friendship between the foes of two world wars.

More than 3 million French and German troops were among an estimated 10 million soldiers who died in the Great War of 1914-1918. Much of the heaviest fighting was in trenches in northern France and Belgium.

A German delegation signed the Armistice before sunrise on Nov 11, 1918, in a private train belonging to the commander of French forces, Ferdinand Foch, parked on rail track running through the Compiegne Forest. Hours later, at 11.00 a.m., the war ended.

“Europe has been at peace for 73 years. It is at peace because we want it to be, because Germany and France want peace,” Macron told several youngsters, with Merkel at his side, referring to the peace since the end of World War Two in 1945.

“And so the message, if we want to live up to the sacrifice of those soldiers who said ‘Never again!’, is to never yield to our weakest instincts, nor to efforts to divide us.”

In a powerful show of unity, Macron and Merkel sat inside the reconstructed teak-lined rail wagon in which the peace charter was signed and looked through a book of remembrance. After each signed the book, they held hands a second time.

The last time French and German delegations had sat in the same place was when Nazi Germany’s Adolf Hitler forced the surrender of French authorities after invading in 1940.

Since World War Two, France and Germany have driven tighter European cooperation and the European Union has become the world’s largest trading bloc.

Macron, 40, an ardent defender of a closer Europe, has turned to Merkel to help him forge deeper economic integration within the EU’s single currency bloc, as well as more collaboration on matters such as defence and immigration.

For years, Merkel, 64, had waited for a French leader with Macron’s zest for Europe. But the fragility of her governing coalition and her own weakened leadership, as well as misgivings over aspects of Macron’s vision for renewal, have meant she has not moved as quickly as Macron would have liked.

This past week, the French leader has toured sites that once lay along the western front, from the battlefields of Verdun in the east to the imposing Thiepval memorial overlooking the Somme valley. There, he and British Prime Minister Theresa May together laid a wreath on Friday.

Along the way, he has warned of the rising threat to Europe posed by a resurgence in nationalism.

“Nationalism is rising across Europe, the nationalism that demands the closing of frontiers, which preaches rejection of the other,” he said in a radio interview on Tuesday. “It is playing on fears, everywhere. Europe is increasingly fractured.”