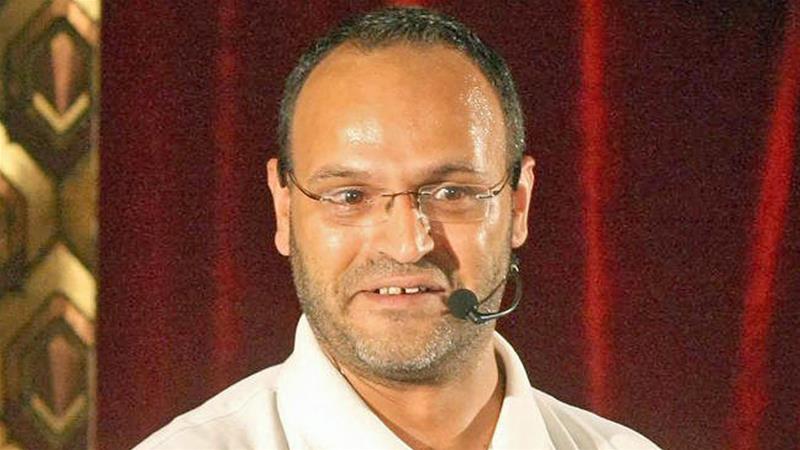 Last November, Ziyad Itani went from being a prominent Lebanese actor, playwright and local celebrity to being an alleged Israeli spy informing on other intellectuals and government officials.

Itani‘s world came crashing down on him as he was detained in Roumieh Prison pending further investigations and a court date.

The official statements by the General Directorate of State Security, the agency that arrested and investigated the charges against him, suggested at the time it was an open-and-shut case of treason and espionage.

It is illegal under Lebanese law to travel to or to engage in any dealings or communications with Israel, which Lebanon considers an enemy state.

But in a sudden turn of events on March 13, Itani‘s fortunes changed again when he was released from prison, and the charges against him were effectively dropped following a decision by Military Investigative Judge Riad Abu Ghaida.

In a further twist in the case, Judge Abu Ghaida issued arrest warrants for Lieutenant-Colonel Suzanne Hajj Hobeiche, a former head of the Anti-Cybercrime and Intellectual Property Bureau, and hacker Elie Ghabash on suspicion of fabricating and framing the case against Itani.

In an interview with Al Jazeera, Itani said he never was a spy, and that he is an innocent man.

He said he had always supported the Palestinian people’s struggle against the Israeli occupation of Palestine and was an active advocate against normalising political and cultural ties with Israel.

He said he was framed to make him look like if he was communication with agents from Mossad, the Israeli spy agency.

Al Jazeera: You were jailed after you were accused of being a spy for Israel last November and the government said you “confessed” to the charges against you. However, several months later you walked home a free man after a judge decided to release you without bail or any charges against you. Tell us what happened.

Ziyad Itani: After I was arrested, my case was transferred from the General Directorate of State Security to the Military Justice court under Investigative Judge Riad Abu Ghaida.

After looking at my case, he determined that the only evidence they had against me was a private message on my Facebook messenger and on my email account, which I did not open or read.

After two sessions, the judge decided to expand the investigation by enlisting the Internal Security Forces Directorate-Information Branch, (ISF) to investigate the case further. In the meantime, I refuted and denied the so-called confession before the judge.

The ISF investigation resulted in discovering and later arresting the hacker Elie Ghabash, who subsequently implicated Lieutenant-Colonel Hobeiche as the one who hired him to frame me.

After that development, I was released without bail, which meant that the charges had been dropped. Now we are waiting for the conclusion of the investigation of Hobeiche and Ghabash.

Al Jazeera: While the case appears that you were framed to look like an Israeli spy, were you at any point thinking in your mind that you were having conversations with Israeli agents or working for Israel?

Itani: No. I was not even communicating via messages on my Facebook or email account. I did not even see those messages.

Al Jazeera: Then why did State Security say in an official statement that there were exchanges between you and an Israeli agent posing as a Swedish woman and that you confessed to that on tape?

Itani: At this point, I will not be able to discuss such intricate details because of the ongoing investigation against officer Hobeiche and the hacker. But once the judge reaches his final decision, I will legally say more about this.

Al Jazeera: State Security also said in the statement that you confessed, on tape. What do you say about that?

Itani: I am totally denying and have rejected this accusation. After all, of the investigations that were done by the very capable ISF, it proved I was innocent, and I was released without any strings attached.

Al Jazeera: As an actor and a Lebanese intellectual, where do you stand about having political or cultural ties with Israel?

Itani: My, and my entire family’s, ethical position against Israel should go without saying here. We, as Lebanese, have historically supported our Palestinian brothers and stood by them against this enemy [Israel].

But if I may recount one example here about the criminal act committed by the enemy [Israel] against the Turkish flotilla [led by the] Mavi Marmara in 2010 that was supposed to break the Israeli siege of Gaza, I called, along with other journalists in the country, for organising and sending another aid ship to Gaza.

We actually did that and organised the ship, called Naji al Ali, which was supposed to carry – along with aid – journalists and activists from all segments of Lebanese society. I was the representative and a spokesperson for this project. I was even called in addition to two others a “terrorist journalist” by the enemy because of our commitment to the Palestinian cause.

Al Jazeera: Several people in Lebanon point to your support for Lebanese director Ziyad Doueiri, who has travelled to Israel and made films there.

In the film, The Attack, Doueiri hired Reymonde Amsallem, an Israeli actress, to play a Palestinian character. He also shot the film in Israel, with the help of the Israeli government.

In, The Insult, Doueiri advances the argument of the Lebanese Christian militias against the Palestinians, concluding that they are the enemy because of their activities in Lebanon and that the Lebanese have no problem with Israel.

Itani: First, what I said about Doueiri at the time was not being conveyed accurately on the Lebanese social media.

Doueiri directed his film in Israel and went back and forth between Israel and Lebanon many times over, and no one from either from the government or the public said anything to him about that.

But when the film was publicly released, and it was popular, a storm of objections went up against him.

What I said at the time was I criticised those who were objecting to Ziyad’s film stating that they really were after him because of the successes he achieved in his film, not because of his normalisation with Israel.

I also said that they were cowards and that they should have objected to Doueiri’s normalisation and filed legal complaints against him if they were honest about it. But they didn’t.

Al Jazeera: How do you feel about Doueiri’s work, especially when treating the Palestinians as an ‘enemy’ of Lebanon?

Itani: Well, first you have to look at Doueiri during a certain period of time when he was to us, a young and upcoming generation, an icon of Lebanese cinema. This is especially true when he did his [1998] film, West Beirut. However, when he went and worked inside the enemy’s territory [Israel], I considered it an unnecessary attempt as a filmmaker. I looked at that as one of his shortcomings – [trying] to normalise cultural ties with Israel.

Al Jazeera: What is your view, as a Lebanese actor and intellectual, of cultural and artistic ties with Israel under the current conditions?

Itani: First, Lebanon is the one country in the Arab world that has paid more blood in defence of the Palestinian cause against this entity [Israel]. This entity cannot be accepted in our societies because it was built on our blood and at the expense of our people.

US accuses Venezuela of aggression in skies over Caribbean

Democrats in London, Ont., gear up for Super Tuesday