Woman, 26, who accuses brother-in-law ex Michigan House Speaker, 33, of years-long rape starting when she was 15 admits SHE often initiated contact with him but claims it was because he ‘brainwashed her’

The woman accusing Michigan’s former House Speaker of repeatedly raping her for more than a decade admits she initiated contact with her alleged attacker – but says she only did so because she was ‘brainwashed’ and ‘groomed’ by the ex-lawmaker.

In the criminal filing, she accused Michigan’s youngest House speaker in more than a century of sexually assaulting her multiple times while she attended Northern Michigan Christian Academy, which was run by his family.

Rebekah – who claims the abuse began when she was 15 – conceded in an interview with Bridge Michigan that she at times reached out to Chatfield, but claimed she was under his spell during the time.

‘It was never consensual, because it started when I was a minor – the brainwashing, the mentality, the manipulation, the psychological, the emotional – he groomed me into being who he wanted me to be,’ she told the outlet.

Chatfield, 33, was elected in 2014 and served as the state’s House Speaker in 2019. The following year, he headed the delegation of seven Michigan GOP leaders who met with then-president Donald Trump at the White House as he tried to overturn Democrat Joe Biden’s win in the state. 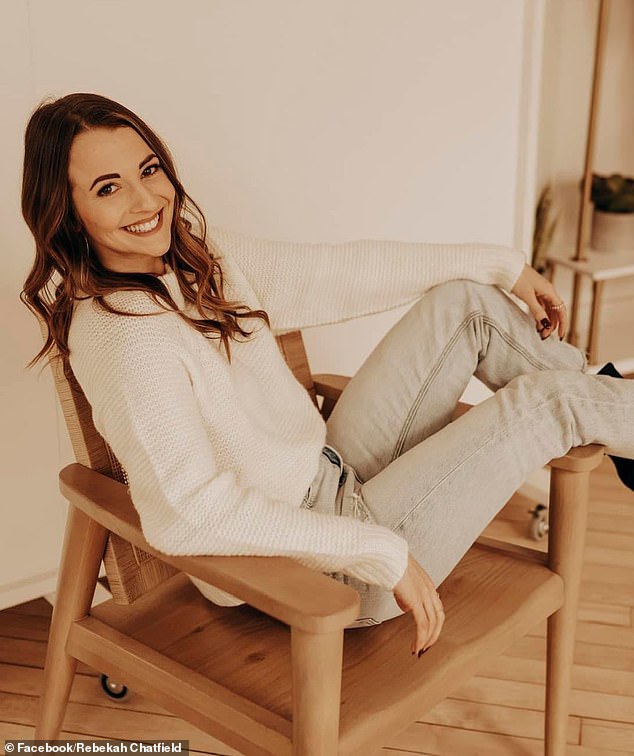 Rebekah Chatfield, 26, claims she was sexually abused for more than a decade by former Michigan House Speaker Lee Chatfield 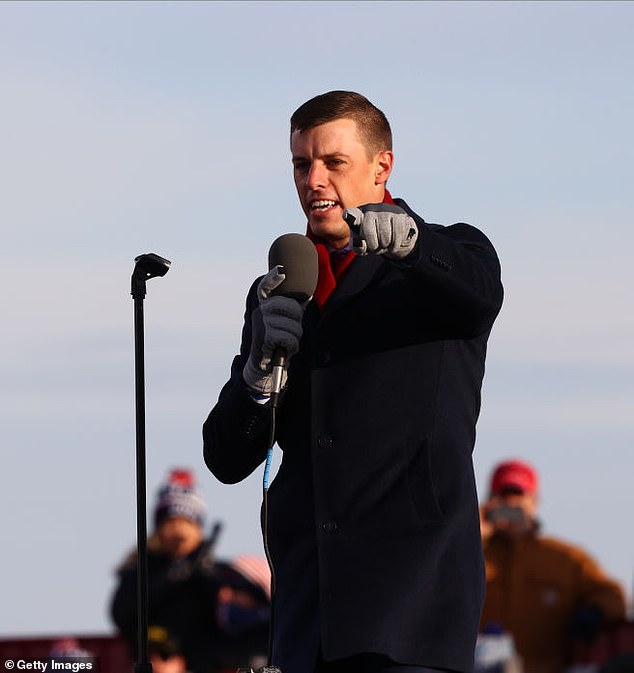 Lee Chatfield, the youngest House speaker in more than a century, was the Republican leader for two years before he left the House in 2021 due to term limits

The alleged abuse by the married politician, who left office in 2021 due to term limits, continued through last year, according to the complaint.

Michigan police on Thursday said they are investigating her allegations.

The abuse by the married politician, who left office in 2021 due to term limits, continued through last year, according to the complaint.

Michigan police on Thursday said they are investigating her complaint.

Rebekah married the politician’s younger brother Aaron in 2014 after the two met at the Christian academy in Burt Lake – where the brothers’ father, a pastor, was the superintendent of the school. 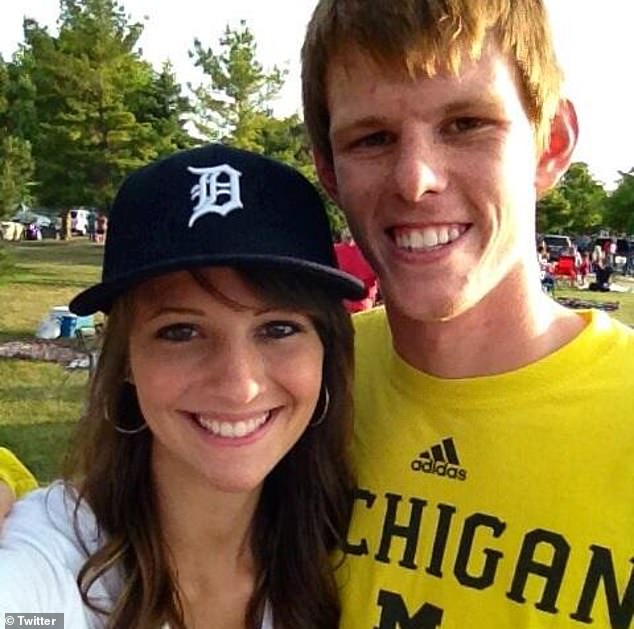 Lee Chatfield did not deny having an affair with his brother’s sister but his lawyer characterized interactions with ‘the woman who is now claiming she was raped’ as  consensual.

‘He did not assault this woman in any manner during their years-long adult relationship. He intends to vigorously fight these false claims,’ said the lawyer, Mary Chartier.

‘Their affair lasted for years, but they were both consenting adults.’

In her interview with Bridge Michigan, Rebekah detailed the years of alleged abuse after keeping the affair secret for more than a decade because she was too ashamed and afraid to tell anyone, including her friends, family members or her husband, she said. 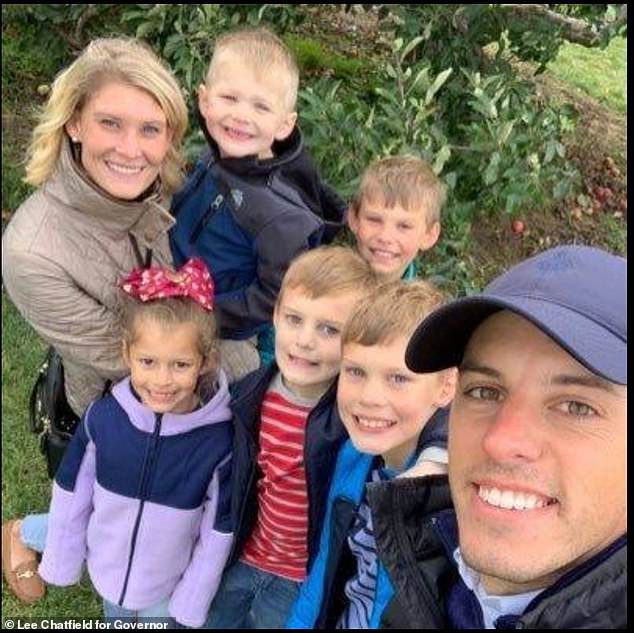 Lee Chatfield (pictured with his wife and children) admitted to having sexual relations with his sister-in-law, but claims they were consensual 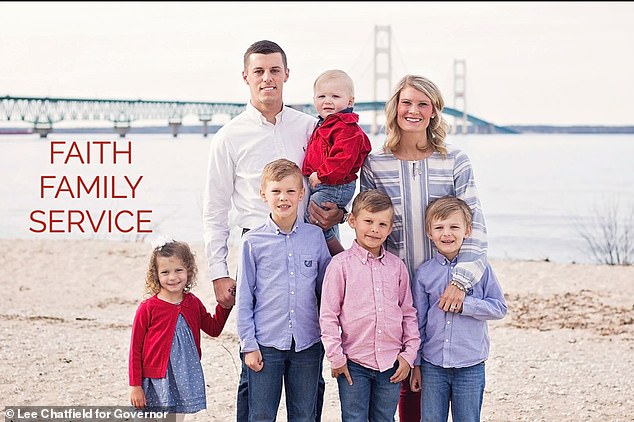 ‘He destroyed me, and has controlled my life since I was 15-16, the past 10-11 years,’ she said. ‘And I know the only way to get justice for this is to come forward and to file a criminal (complaint) against him.’

Rebekah said the abuse started before she married Aaron Chatfield when they were both 19 and continued throughout Lee Chatfield’s tenure in office.

She said the first instance of abuse took place in the basement stairway of the Chatfields’ home when she was 15 years old.

She said as she attempted to go upstairs, Lee blocked her and began groping her through her clothes.

‘Eventually he stopped and then he got up, walked to open the door and he let me go back up to my room,’ she said. ‘That was just the start of it.’

In Michigan, 15-year-olds can’t legally consent to sex and adults can be charged with statutory rape for having intercourse with teens under 16.

Rebekah, who said she never kept a diary or evidence of her encounters with Lee out of fear her husband would find it, alleges the assaults continued ‘more times than I can count’ over the years, Bridge reported. 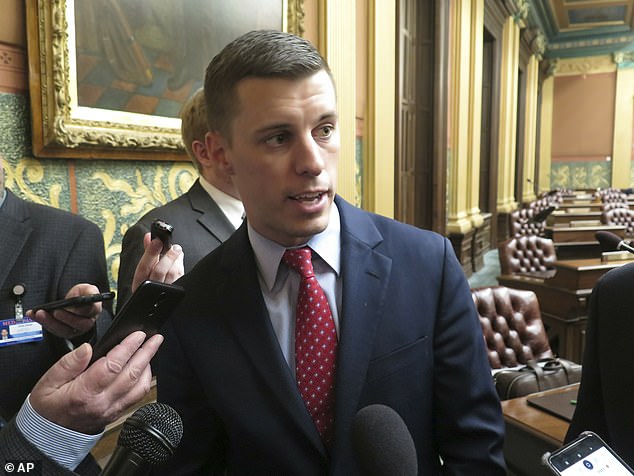 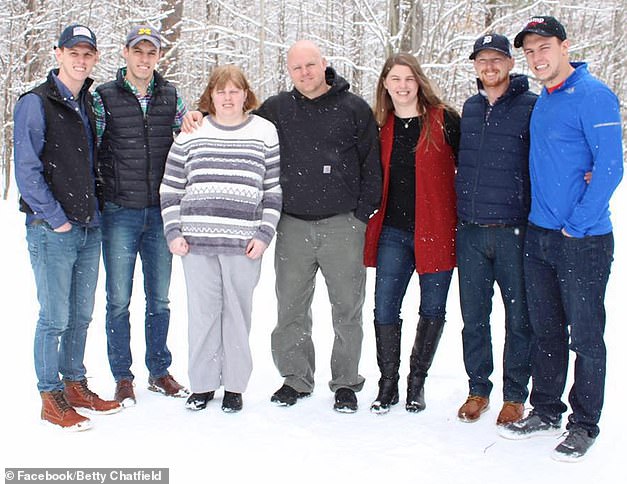 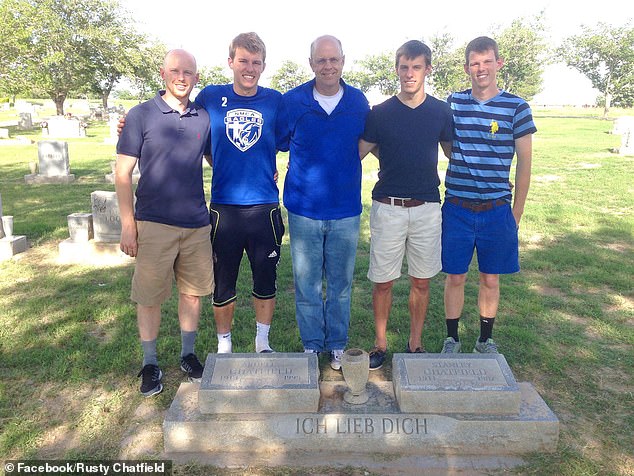 She said things escalated when Lee would find excuses to text her late at night and would enter the guest room where she slept and grope her while she lay stunned and scared.

She said the encounters were typically short because Lee’s wife was in the couple’s nearby bedroom but over time the abuse eventually turned into unwanted sex.

Rebekah said when she met Lee she was a vulnerable high-schooler with a troubled home life and he took her under his wing, allowing her to stay overnight at his family home with his wife and their young children. 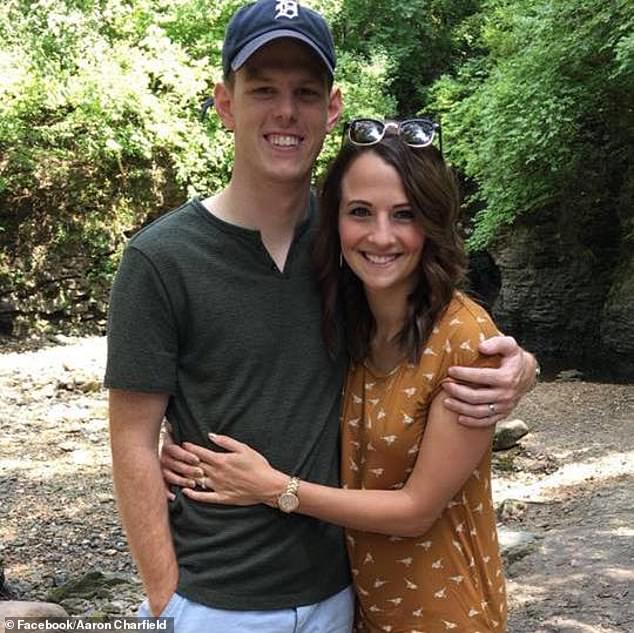 Rebekah’s husband Aaron has come forward to publicly support her 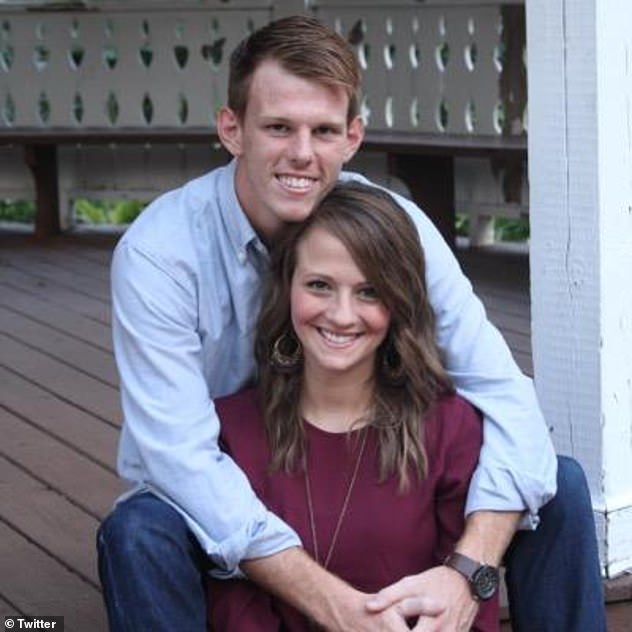 Rebekah would even baby-sit from time to time.

Lee Chatfield was a young teacher at Northern Michigan Christian Academy who taught several of Rebekah’s classes and was an assistant coach for her soccer team. 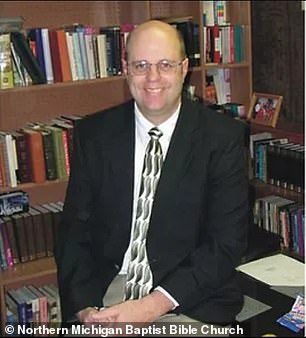 ‘I had a lot of family stuff going on in my life,’ she said. ‘My dad was a recovering alcoholic, and so I believe that Lee used those (circumstances) against me and helped take advantage of me. So he would manipulate me, he would mess with my emotions.’

Lee’s father Rusty Chatfield – who founded and ran the church where his son taught – denied the claims.

He told the Bridge on Friday that ‘the allegations are false,’ but refused to elaborate.

But after years of silence, Rebekah finally opened up about her alleged abuse with her family, friends and husband in December as well as reaching out to Lansing Police. 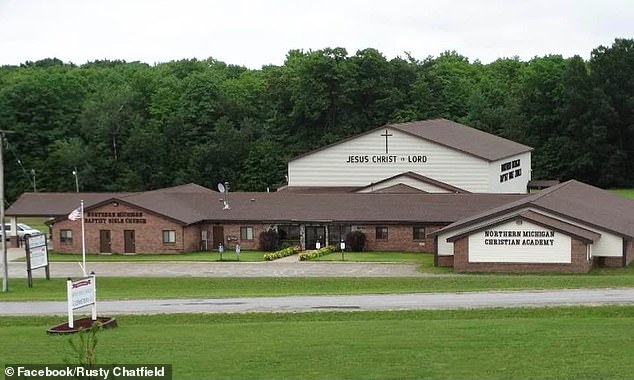 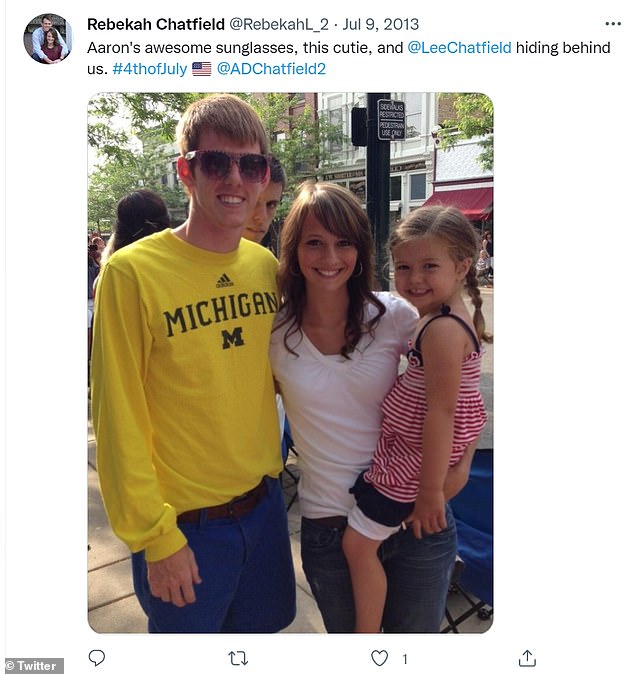 Pictured: Rebekah and Aaron pose for a picture as Lee Chatfield lurks behind 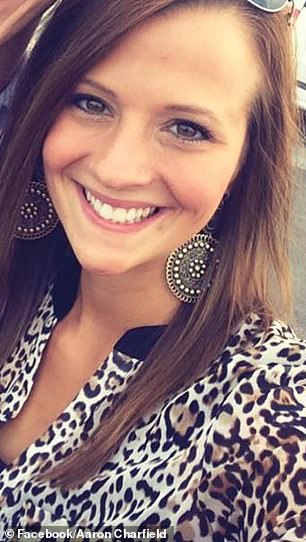 Rebekah Chatfield, 26, says the abuse she endured began at age 15

He says while he was not aware of the alleged assaults by his brother he did have suspicions years ago about his brother’s close behavior with Rebekah.

‘Lee portrays himself as a [traditional] family man, a conservative guy who believes in the Bible and the Bible is so important,’ said Aaron, 26. ‘It couldn’t be further from who my man was as a person.’

The politician’s lawyer also revealed that Chatfield has had multiple extramarital affairs throughout the years.

‘Mr. Chatfield deeply regrets the decisions he has made. It has caused great pain to his wife and family, and they are working through this together,’ Chartier said.

‘But he did not assault this woman in any manner during their years-long adult relationship. He intends to vigorously fight these false claims.’