At times, Tracey Smith wondered if she would ever see Lenny again.

For the past four years, she had lived in Japan with her husband, Graeme, who was working as a HR director for a multinational company. Lenny, their poodle mix, was there too.

But when the COVID-19 pandemic started to unfold in March, Tracey and Graeme decided to fly home to Australia, leaving Lenny on a property where other dogs were being looked after until he could come back too. 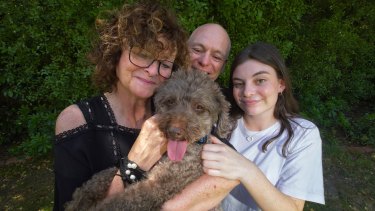 Soon after, international flights were cut and eventually planes stopped flying altogether into Melbourne, leaving Lenny and hundreds of other pets stranded overseas.

"He was well cared for, but you look at the cost overall, wondering how long you can keep it up," said Tracey.

"You keep thinking 'soon they will open the borders, soon it will happen' … it was getting to that point wondering 'well what are we going to do?'."

After eight months of trying to find a way to get Lenny home, including through another country, persistence finally paid off and Tracey secured him a place on board a Japan Airlines cargo plane. 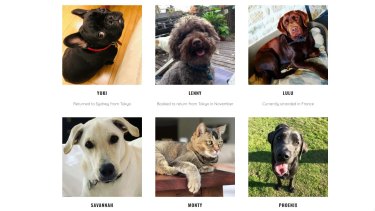 Some of the pets that have been stranded overseas.Credit:

On Thursday morning, they were reunited after Lenny spent 10 days in a pet quarantine facility in Mickleham.

Tracey admitted that she wondered if it would be easier on the 10-year-old dog to not put him through the long journey home. The horrible prospect of euthanasia was raised.

"The thing that was in the back of your mind because it's a long flight and he's 10 years old, it is stressful," she said. 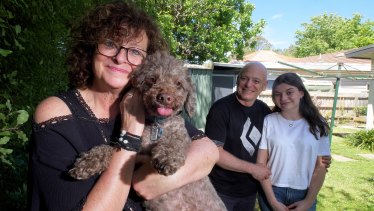 Lenny is happy to be home after being stranded in Japan due to COVID-19.Credit:Luis Enrique Ascui

"You start to think about whether you should just leave him there."

Although he has lost a bit of weight, Lenny appears happy to have made it back to Australia. Tracey's daughter, Catherine, is pleased too: it's her 20th birthday on Friday.

"It's her birthday present," said Tracey. "I said I'd put a little bow on him."

Kate McQuestin, who started a campaign to bring pets home called Mission ImPAWsible, said she knew of 150 animals that were stranded overseas, in places such as the US, UK and South America.

Happily, she said 90 per cent of those were either back in Australia or were in the process of coming home. Her own French bulldog, Yuki, arrived in October.

Another group of desperate owners even went to the effort of chartering a flight from Canada to Australia, carrying more than 60 pets on board.

"My worry was that people were faced with giving their pets away or worse," she said.

"It's a happy ending, I suppose, when there are some difficult times and sad stories."

As for Lenny, his travelling days are over. He's been treated to some dried chicken snacks and new toys, which he has already chewed apart.

"It was a massive relief to know that's it, he's here. He's not going anywhere again," said Tracey.

In need of some good news?

Stories that will brighten your outlook, delivered weekly to your inbox. Sign up for our Greater Good newsletter at The Age here; Sydney Morning Herald here; Brisbane Times here and WAtoday here.

Wikileaks' Assange in court ahead of U.S. extradition hearing next week

China will not accept US 'theft' of TikTok: State media