Liz Truss tonight ruled out ever ordering the UK into lockdown if she becomes prime minister.

Facing Tory members at a leadership hustings she claimed she had always been against them despite being in Boris Johnson’s administration that repeatedly closed shops, schools and pubs to deal with Covid.

Asked if she would authorise another lockdown, she said ‘no, I wouldn’t’, and when asked if she thinks lockdown was a bad idea, she said: ‘I wasn’t really a core part of that Covid decision-making, and often frankly it was presented as a fait accompli, as the French would say, to the wider Cabinet.

‘Every single time I was given the chance to express a view I was on the side of doing less.’ 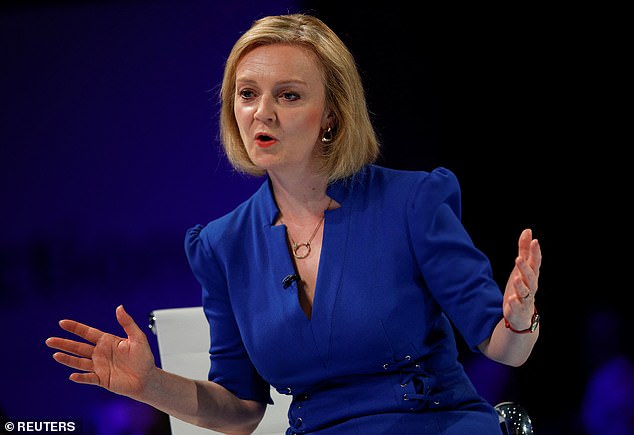 Facing Tory members at a leadership hustings she claimed she had always been against them despite being in Boris Johnson’s administration that repeatedly closed shops, schools and pubs to deal with Covid.

The trade minister put her previous vicious fight with Team Truss behind her to back the Foreign Secretary, introducing her at tonight’s live hustings in Exeter.

She joins Tom Tugendhat and Nadhim Zahawi as former candidates to support Ms Truss and cement her position as the favourite to enter No10 in September.

Addressing the event in Devon she said she liked both candidates were ‘good Conservatives who love their country’, but that Ms Truss was the ‘hope candidate’.

‘I’ve seen enough to know who the person I’m going to put my faith in is. And that is Liz Truss.’

In turn Ms Truss referred to her as a ‘great person, a great politician and a great patriot’ despite her campaign being accused of dirty tricks to overtake her and force her way into the final two.

At one point Trade Secretary Anne-Marie Trevelyan, a Truss supporter who is Ms Mordaunt’s boss, went live on the radio to suggest she was lazy.

Mr Sunak today unveiled a plan to cut the basic rate of income take by 20 per cent by the end of the decade as he tried to make up ground.

But a new poll today put Ms Truss ahead of Keir Starmer in a head-to-head for best prime minister for the first time.

A survey by Redfield and Wilton Strategies put her on 37 per cent –  up 12 percentage points in a fortnight –  with the Labour leader on 36 per cent. Sir Keir remains ahead of Rishi Sunak.

Murders in Mexico surge to record in first half of 2019