Liz Truss vowed she will ‘absolutely’ not cut public spending as she batted away criticism of the mini-Budget during a bruising PMQs.

In tetchy clashes with Keir Starmer, the premier shrugged off warnings of a £60billion black hole in the public finances amid soaring inflation, tax cuts and the markets meltdown.

And Ms Truss stated that plans to ban no-fault evictions will go ahead, despite suggestions only yesterday that the manifesto pledge would be ditched.

The Commons exchanges came on another fast-moving day when: 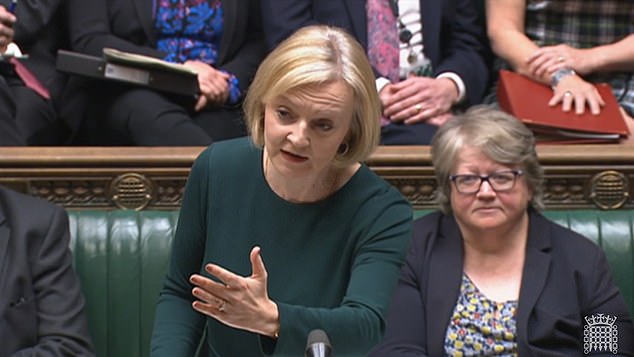 In tetchy clashes with Keir Starmer, Liz Truss (pictured) shrugged off warnings of a £60billion black hole in the public finances amid soaring inflation, tax cuts and the markets meltdown 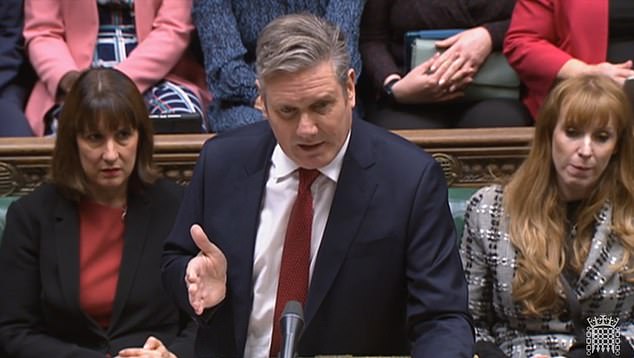 Seeking to turn the knife on the government’s woes, Sir Keir challenged Ms Truss to keep her promise not to cut public spending

Seeking to turn the knife on the government’s woes, Sir Keir said: ‘During her leadership contest the Prime Minister said, I quote her exactly, ‘I’m very clear, I’m not planning public spending reductions’. Is she going to stick to that?’

‘What we will make sure is that over the medium-term the debt is falling. We will do that, not by cutting public spending, but by making sure we spend public money well.

Sir Keir condemned Jacob Rees-Mogg for arguing in interviews this morning that the Bank of England’s failure to cut interest rates fast enough, rather than the mini-Budget, might have sparked the market chaos.

‘We’ve also taken decisive action to make sure that we are not facing the highest taxes for 70 years in the face of a global economic slowdown.

‘What we are making sure is that we protect our economy at this very difficult time internationally. As a result of our action – and this has been independently corroborated – we will see higher growth and lower inflation.’

Ms Truss said: ‘The fact is that when I came into office, people were facing energy bills of up £6,000. The party opposite are shouting, but he is opposing the very package that we brought in, the energy price guarantee. That was the major part of the mini-budget that we announced.

‘He has refused to confirm whether or not he backs our energy price guarantee for two years, which protects families, not just this winter, but next winter.

‘But going back on the commitment to end no-fault evictions is an act of extreme callousness.

‘Can the Prime Minister reassure the 11million private renters in this country that she will carry out her commitment to get rid of no-fault evictions?’

‘Copycat’ killers who wanted to become their favourite movie villains