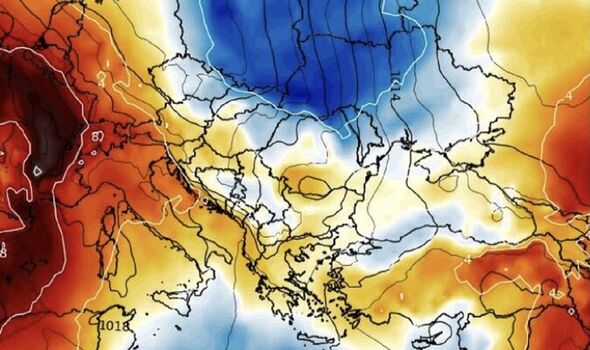 Wind and rain to start the week will give way to an African heat surge as the barmy weather delivers its latest twist. The run up to mid-autumn will feel more like the prelude to spring as a plume of warmth from the Continent and North Africa drives blue skies and sunshine

Jim Dale, meteorologist for British Weather Services, said: “A stubborn low-pressure system forming to the southwest of the UK through the start of the week, while the jet stream pushes to the north, will pull air in from a milder direction.

“This will come in from the Atlantic with perhaps an element from the Continent in the mix, but it won’t take a lot to bring a change that will draw a plume of warm air in from Africa.

“If the warm weather ramps up a bit more through the week, we might be looking at a little bit of an Indian summer.”

Weather models show temperatures until the weekend hovering in the high teens, with some outlooks predicting 20C.

Southern and eastern Britain will see the warmest weather although Scotland and northern England are still expected to hit double figures.

Mr Dale said: “If you are out and about this week, in the sunshine you will need to be thinking about T-shirts.

“We could see 18C or 19C in parts of the country, perhaps higher around mid-week, which is very good for this time of year.

“Although for a true Indian Summer we need a longer period of warmth after a very cold spell, this could be a little bit of an Indian Summer.”

A bumpy run up to the warm spell during the start of the week awaits parts of the country wind and rain forecast.

Met Office meteorologist Alex Deakin said: “Out in the Atlantic we have an area of high pressure and a slow-moving area of low pressure to the southwest.

“These two look like having a bit of a battle next week as to which one will dominate the weather.

However, the jet stream will calm as it shifts northwards, ‘curling’ round low pressure to keep it at bay, he added.

He said: “The jet stream is no longer barrelling in from the Atlantic next week, the winds high up in the Atmosphere will curl around this area of low pressure.

“This shift in the jet stream pattern means the weather won’t be quite as changeable, and that is set to continue as we go through next week.”

Weathertrending’s John Hammond added: “Once any low cloud, fog and morning frost have cleared, the low 20Cs is just about possible in the sunnier spots of southern Britain around midweek.”

Some forecasters, however, are less optimistic and warn of a late-week return to more unsettled weather.

Netweather’s Ian Simpson said: “It is currently looking likely that the warmest air mass will stay to the east and south of Britain.

“Tuesday looks set to be dry and sunny for most, but it will generally turn cloudier during the latter part of next week with some bands of rain.

“Northern Scotland is likely to stay mainly dry from Tuesday onwards, with a ridge of high pressure preventing the rain bands from making much progress through Scotland.”