The luxury of the 20-storey Botanic Melbourne apartment building in Southbank hits you as soon as you walk into its opulent lobby: there are modern sculptures, a patent leather couch and a grand golden curved staircase leading up to a boardroom.

But one of the new building’s first tenants, Josh Olds, says life at Botanic became nightmarish in July last year after the state government used 13 apartments to house former rough sleepers as part of the From Homelessness to a Home program. 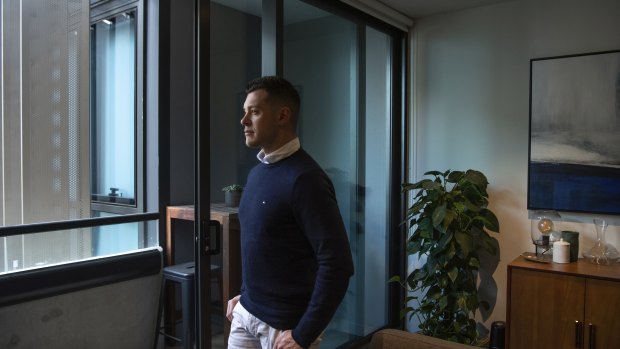 Renter Josh Olds at his apartment in Southbank.Credit:Penny Stephens

“There was a lot of damage to the building,” Olds says. “Needles in the carpark, we had the pool broken which flooded one of the levels and the car park. There was a number of thefts from cars in the basement, so I started parking at work because I didn’t want my car damaged.”

In July 2020, the state government announced a groundbreaking $150 million program to move more than 2000 homeless people – who had been temporarily put up in hotels during lockdowns – into long-term housing.

They were also provided with wrap-around support services, such as drug and alcohol counselling and mental health assistance.

A review of the program, obtained by The Age, said the provision of stable housing was transformational for the majority of people involved. 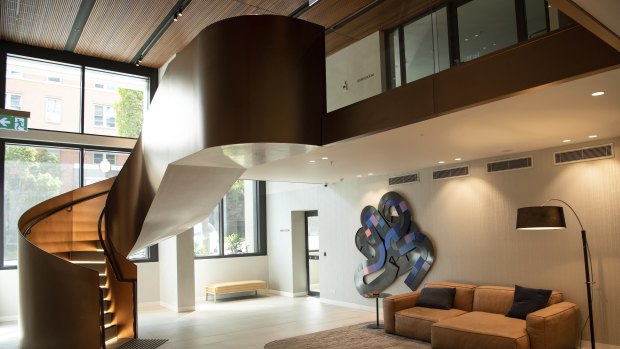 The foyer at the Botanic building.Credit:Penny Stephens

However, it warned the biggest issue the program faced was a lack of available, appropriate housing.

This meant that a small number of former rough sleepers with complex mental health and drug and alcohol issues were placed in “inappropriate” luxury high-rise apartments that had been purchased by the state government.

“High density properties that were spot-purchased under the Big Housing Build, while they may have been appropriate for other social housing tenants, were not suitable for the most complex clients in the From Homelessness to a Home program,” said the review, by the Nous Group consultancy, in January.

The review said 109 people were housed in high-density private apartment buildings. In one case, 26 households were placed into one building. 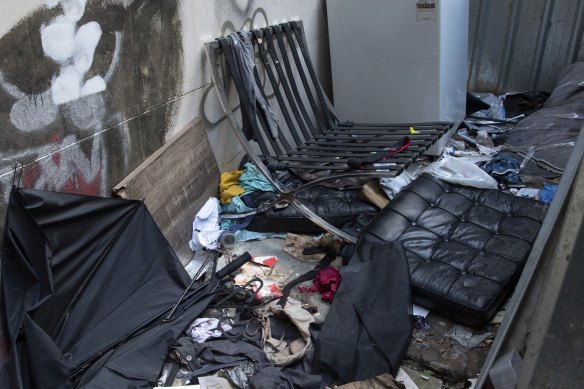 Syringes and rubbish at the back of the Botanic apartment building in Coventry Street in September.Credit:Penny Stephens

“Soon after moving in, we heard reports of several From Homelessness to a Home clients in high-density private apartment buildings exhibiting behaviours of concern,” the Nous report says. “We have been informed of, and at one site shown CCTV footage of, alleged thefts, violence, sexual assault and public defecation.”

The Nous report said a previous study had reported that people with a long history of homelessness would not be successful if placed in high-density, multistorey settings.

“The experience of From Homelessness to a Home suggests that these settings are indeed inappropriate for a small proportion of highly complex clients,” it said.

In November, The Age revealed multiple people in the program were moved out of Park House in Abbotsford after other residents complained of threats, public drug taking and violence.

Of the clients tenanted in high-density properties, 48% have been relocated, received a breach-notice, or are at risk of receiving a notice

The Nous review says most of the issues occurred at Park House in Abbotsford, Botanic Melbourne in Southbank and Victoria Square in Footscray. The media also reported similar issues at Queens Place in the CBD.

“Of the clients tenanted in high-density properties, approximately 48 per cent of people have been relocated, have received a breach-notice, or are at-risk of receiving a breach-notice,” the Nous review says.

Housing providers involved with the program stress it was overwhelmingly successful and only a small number were housed in unsuitable high-density apartments.

“The program has been transformational for many whose stories often get overlooked,” said Launch Housing CEO Bevan Warner.

“Rapid deployment was essential as COVID numbers accelerated, and while some unsuitable housing placements caused real distress for neighbours and clients, overall and for the vast majority, the program has literally been life-saving and life-changing.”

Low-rise social housing properties – without shared walls, facilities and common areas – were generally considered preferable, as privacy and space are important in allowing people to recover from homelessness and transition into their new home and local community.

It is also important for people to have good access to health and support services, family and friends, and public transport.

The developer behind the luxury apartments used in the program told The Age that it wasn’t clear the units would house former rough sleepers when they were approached by the government to be part of its social housing purchasing program. 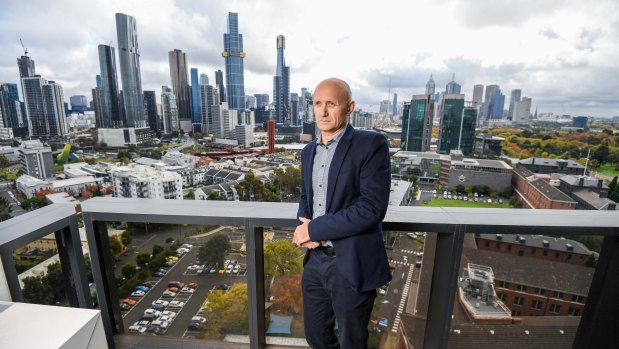 “We were misled,” said Ashley Williams, the Botanic’s developer and past president of the Urban Development Institute of Australia.

“No one I have spoken to from the industry would have [participated in From Homelessness to a Home] if they had any inclination. This is a building where people have saved all their lives to buy an apartment; they have pride in the community and the building.” 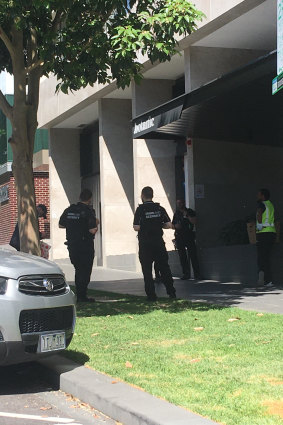 Security guards were installed around-the-clock at the luxury building.

Williams said there was a “lack of any acceptance or acknowledgment from [government body] Homes Victoria that it was responsible for the problems that had arisen”.

“It went straight into bureaucracy mode and tried to palm it off that we were being unreasonable,” he said.

Other developers approached by The Age did not wish to speak on the record but echoed similar complaints.

One former Botanic resident, who cannot be named due to legal proceedings relating to their time in the building, said from mid-2021 onward the feeling of safety at the building dissipated and police visited frequently.

“There would be groups of guys loitering in the lobby, someone passed out on the grass out front. People finding syringes. People following you through the doors when you came in. Someone hanging out for hours on the couch in the lobby,” said the resident, who left the building after four months due to fears for their safety.

“The drug deals in particular were really obvious. You had [unknown] people going up and down for all levels all times of day. I was working from home at the time, talking on Teams calls with people screaming in the hallway. I had my door barricaded at night because I had girls slamming on the doors. A guy doing a drug deal in hallways with a giant rottweiler. Another time I came home with eight cops in the hall.”

At least $500,000 of taxpayer money was spent on around-the-clock private security at Botanic, numerous invoices and departmental letters obtained by The Age show.

A number of letters dated from late 2021 and early 2022, signed by Homes Victoria deputy CEO Nicola Quinn, acknowledge lump sum payments to Evolve for private security “as a gesture of goodwill” after complaints about safety.

Williams, the director of Evolve, which sold individual apartments within the Botanic complex to the state government, said there was an ongoing dispute between the department and the building’s body corporate over an outstanding amount of around $80,000.

A Homes Victoria spokeswoman said that “where appropriate”, the government agency had contributed to security costs.

“Many people with a lived experience of homelessness are overcoming trauma and adversity, and for some, settling into a new home can be challenging,” she said. “In some circumstances, relocations have been required to ensure the best possible outcomes for our clients.” 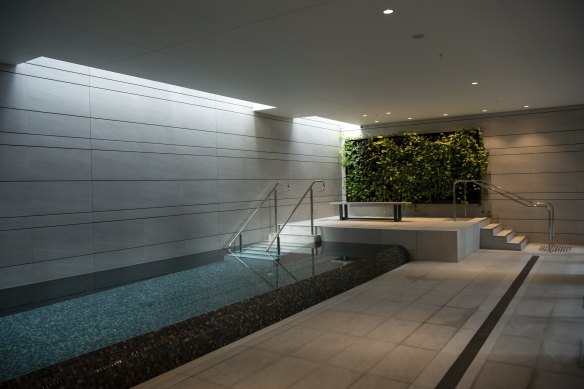 The pool at the Botanic.Credit:Penny Stephens

One Botanic apartment owner attempted to sue Evolve for loss of resale value he alleged was due to its sale of apartments to the government as part of From Homelessness to a Home.

Norman Franzi claimed damages of $100,000 – including for construction issues and “deceptive conduct” – in the Victorian Civil and Administrative Tribunal for not informing residents of the sale of the apartments to the department.

In a statement of claim from February, Franzi claimed the around-the-clock security presence and reports to police had been “unable to resolve the problems”.

The statement also alleged that in making the sale to the Department of Housing, the developer misled Franzi and breached his contract of sale, which states that “the building was a boutique luxury apartment building”.

In response in July, Evolve said those claims were “vague, embarrassing and liable to be struck out”, and denied it had any liability to the resident for “actual or alleged loss or damages arising out of or in connection with the sale of lots in the building to third parties”.

The matter was discontinued with consent of both parties in August.

The Nous review warned the situation in high-rise properties posed reputational danger and could have an impact on housing supply.

“Stories about incidents have recently appeared in the press, and more may come over coming weeks and months. By focusing on what has not gone well, rather than what has, they have the potential to exert negative pressure upon future homelessness reform planning and delivery.”

Housing minister Danny Pearson said there was a need for a more targeted approach when allocating housing to people.

“If the three of us are all recovering alcoholics … is it a smart idea to put us next door to each other? Probably not,” he said.

“If we have a hands-off approach, we just turn around and say, well, there’s a house over there, off you go … that’s not good public policy. That’s not looking after our clients and that’s not getting the outcome that we want. So it’s about really trying to think about how do we actually try and do this in a better way.”

Life at Botanic is now calmer than at the height of lockdowns.

A number of From Homelessness to a Home clients have since left the building, although Olds says he still feels unsafe from time to time.

He believes it could also be uncomfortable for former rough sleepers to be placed alongside wealthy professionals.

“These programs can work in the right places,” he says.

“I’m a person who pays my taxes. I also do what’s best for the community and do what’s right for other people. I understand the needs of [homeless] people, but I also have a right to a safe environment if I’ve worked hard for that.“

The best of Good Weekend delivered to your inbox every Saturday morning. Sign up here.

London could be locked down with travel in & out of M25 BANNED, minister admits