Emmanuel Macron has said that Europe must boost its defence and ends its ‘naivety’ in his first remarks since Australia was snubbed their submarine deal in favour of a new security pact with the US and the UK.

The French president was speaking as he announced a multi-billion euro deal to sell three of the country’s state-of-the-art Belharra frigates to Greece.

‘Europeans must come out of their naivety,’ Macron said at a news conference on Tuesday alongside Greek Prime Minister Kyriakos Mitsotakis at the Elysee Palace.

‘When we are under pressure, … showing that we also have power and the capacity to defend ourselves … is simply making ourselves be respected.’

As part of the Aukus alliance, Australia shredded a $65billion-deal to buy diesel-electric submarines from France, in favour of nuclear submarine technology provided by Britain and America. 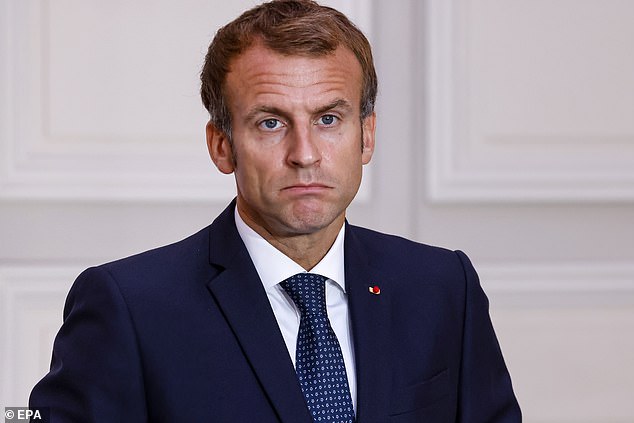 ‘Europeans must come out of their naivety,’ Macron said at a news conference on Tuesday alongside Greek Prime Minister Kyriakos Mitsotakis at the Elysee Palace 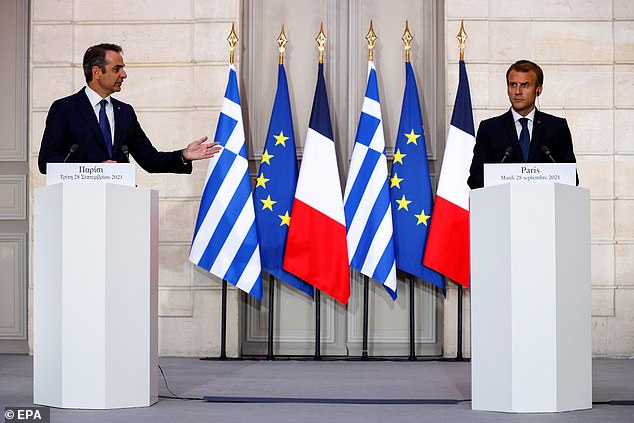 ‘Today is a historic day for Greece and France. We have decided to upgrade our bilateral defensive cooperation,’ Mitsotakis said. 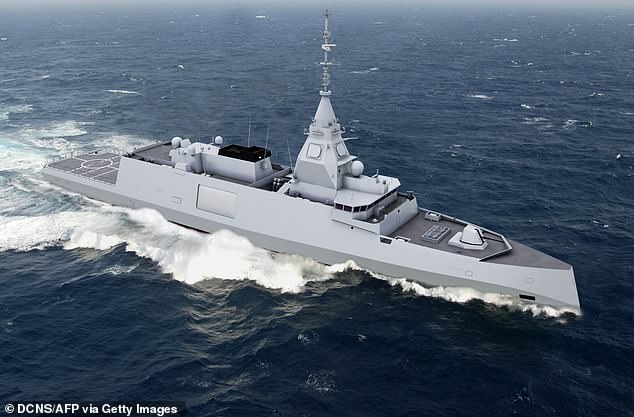 An artists impression of France’s new warship, the Belharra. First steel was cut in October 2019 and the lead ship is projected to be laid down in November 2021

An incandescent Macron had recalled his ambassadors to both Canberra and Washington as a result of the news.

Ambassador Philippe Etienne will go back to Washington on Wednesday with a ‘clear mandate,’ Macron said.

He stressed he and U.S. President Joe Biden agreed last week in a phone call to open in-depth consultations aimed at creating the conditions for ensuring confidence between the longtime allies.

Macron said he is to talk again with Biden in mid-October, before a scheduled in-person meeting at the end of next month in Europe.

The U.S. are ‘great historical friends and allies in terms of values, but we must see that for more than 10 years the Americans first focus on themselves and have strategic interests reoriented toward China and the Pacific,’ Macron said.

‘We must, as Europeans, take our part in our own protection,’ he added. ‘It is not an alternative to the alliance with the U.S. nor a substitute for it,’ he stressed, adding that European defence plans should come in addition to NATO.

The French deal with Greece was inked less than two weeks after Macron was left reeling by the Aukus announcement.

He called Athens’ decision to buy the Belharra ships ‘a sign of confidence’ in France’s defence industry, against competition notably from the American group Lockheed Martin, according to press reports.

‘It contributes to European security and the reinforcement of Europe’s strategic autonomy and sovereignty, and therefore to international peace and security,’ Macron said.

The French leader has long insisted that Europe needs to develop its own defence capabilities and no longer be so reliant on the United States, even warning that NATO was undergoing ‘brain death’. 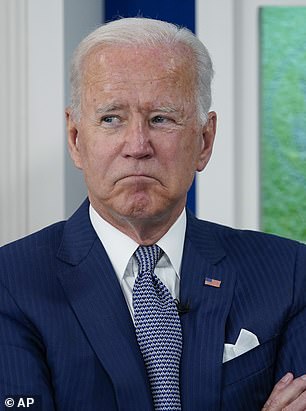 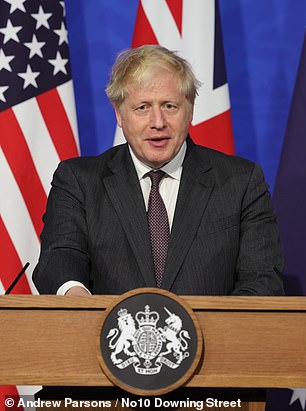 An incandescent Macron had recalled his ambassadors to both Canberra and Washington (Biden pictured left) as a result of the news. Boris Johnson (right) had his blushes spared on that occasion

‘Today is a historic day for Greece and France. We have decided to upgrade our bilateral defensive cooperation,’ Mitsotakis said.

He said the agreement involves ‘mutual support’ and ‘joint action at all levels,’ as well as an option to purchase a fourth frigate.

No financial details were provided on the value of the deal, but the ships are set to be delivered starting in 2024. 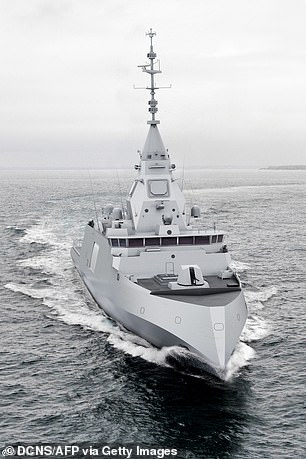 The accord did not include the sale of any French Gowind corvettes, a possibility that had been evoked in Greek media reports.

‘The construction by France of this state-of-the-art equipment contributes to an ambitious European defence,’ said French Defence Minister Florence Parly.

Mitsotakis added that the French deal would not affect talks on extending a longstanding defence cooperation agreement between Greece and Washington, despite the tensions sparked between the EU and Washington after the Australia submarines row.

The agreement is ‘not antagonistic’ to the Greek-US relationship, he said, citing how ‘France stood by us during difficult times in the summer of 2020’, a reference to Turkey’s challenging of Greek territorial rights in the Aegean Sea.

Macron added that the frigate sale was not meant to be seen as a threat against Ankara, but a means to jointly ensure security in the Mediterranean as well as in North Africa, the Middle East and the Balkans.

Greece and France had already roused Ankara’s ire in January, when they signed a 2.5-billion-euro ($3 billion) deal for 18 Rafale jets – 12 used and six new – as part of a burgeoning arms programme to counter Turkish ambitions. 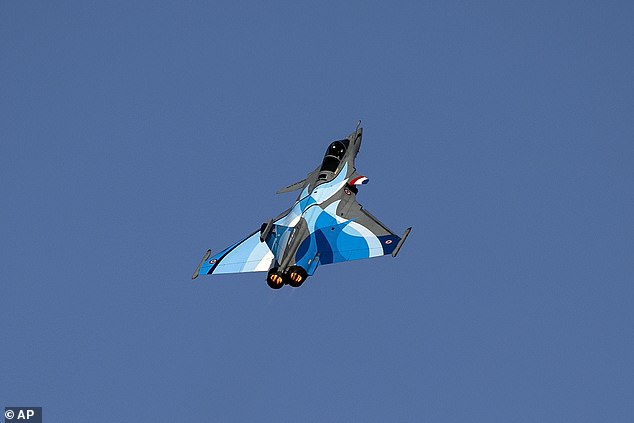 A French Rafale fighter jet performs during an airshow at Tanagra air base, north of Athens, on Saturday, September 4 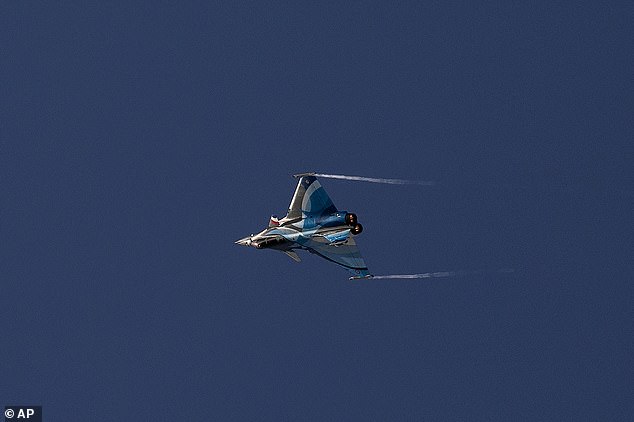 A French Rafale fighter jet performs during an airshow at Tanagra air base, north of Athens, on Saturday, Sept. 4, 2021. The performance is part of an annual airshow, known as Athens Flying Week, which hosts aerobatic teams from several countries

Earlier this month, Mitsotakis surprised many observers with plans to buy an additional six Rafale jets, bringing the total order to 24.

‘It’s not directed against anyone,’ Macron said. ‘It allows more efficient and coordinated action for peace, cooperation and stability, in an international order founded on the rule of law and the full respect of commitments.’

Macron also vowed that the US-Australia pact would not impact France’s strategy for the Indo-Pacific region, where China has made no secret of its desire to exercise significant military sway.

‘We have one million fellow citizens who live in this region, and over 8,000 soldiers deployed there,’ Macron said, referring to France’s presence through several overseas territories in the region.

He added, however, that ‘Europeans must stop being naive’ regarding geopolitical competition, while confirming that France’s ambassador to Washington, called home in the wake of the subs crisis, would return on Wednesday.