Meghan Markle stood by silently as her handler furiously demanded a private table at New York City’s Michelin-starred Le Coucou in 2017, according to a new book.

Former maître d’ Michael Cecchi-Azzolina, who worked at the restaurant for two and a half years, claims the star-turned-royal required a table because ‘it’s for someone who is dating a prince.’

‘I said, ‘I still don’t have a private table for you,” he wrote in his upcoming memoir, ‘Your Table is Ready: Tales of a New York City Maitre D.’

Markle and her handler arrived at the restaurant 20 minutes early for their reservation and were subsequently aggressive with staff.

‘Are you aware my guest is dating Prince Harry and about to be a duchess?’ Cecchi-Azzolina recalls the handler asking. ‘Don’t you have a private area for us to wait?

‘My first impulse was to laugh. I could give two s**ts about Prince Harry’s date, and by the attention the escort was drawing from the crowd at the bar, nor did anyone else.’

During the encounter, Markle reportedly ‘didn’t say a word’ and was described by Cecchi-Azzolina as ‘aloof.’

‘We get the most powerful people in the world that come here — no one really cares about you,’ he said. 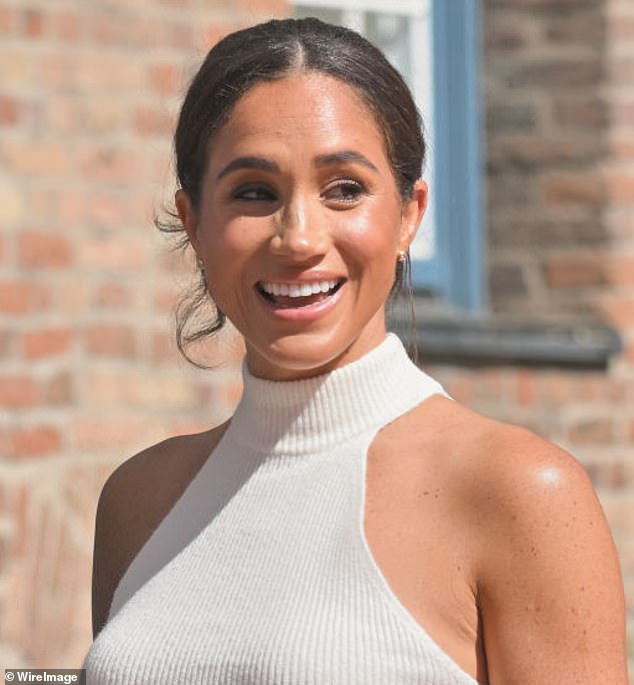 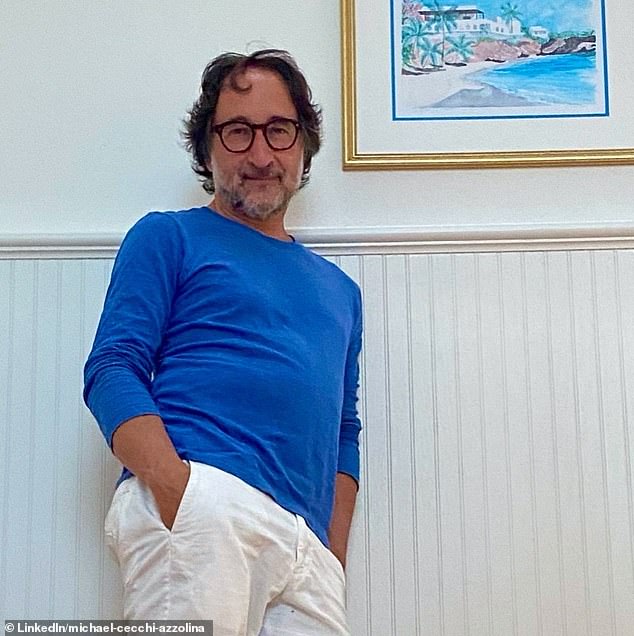 Cecchi-Azzolina worked at New York City’s Michelin-starred Le Coucou for two and a half years. He wrote his allegations in his memoir: ‘Your Table is Ready: Tales of a New York City Maitre D’ 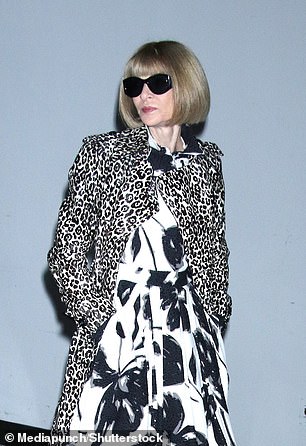 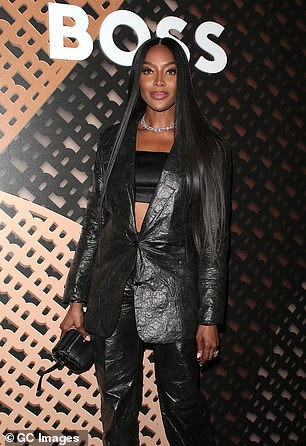 He adds in other encounters with celebrities, including Vogue editor Anna Wintour and supermodel Naomi Campbell, both of whom allegedly regularly appeared unannounced and repeatedly sent food back at Raoul’s Soho.

‘Naomi Campbell would come, be rude and complain about her food almost every time,’ Cecchi-Azzolina writes.

The supermodel would routinely appear at the restaurant in the early 2000s as she dated U2 bass player Adam Clayton.

‘She was someone we dreaded coming in,’ he told the New York Post.

‘She needed a lot of attention. She sent her food back quite a few times. I want to say it was the rack of lamb.’ 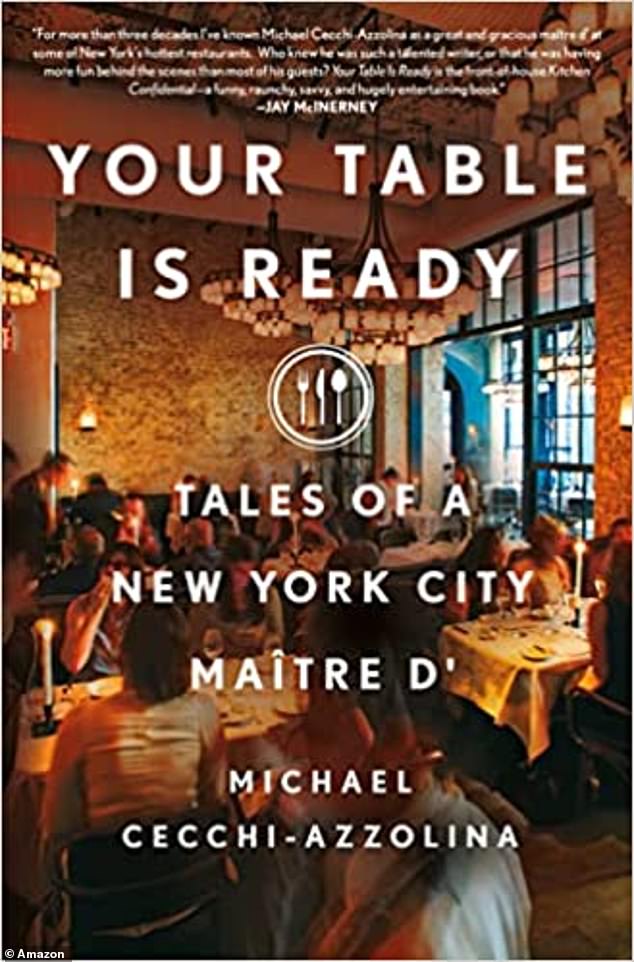 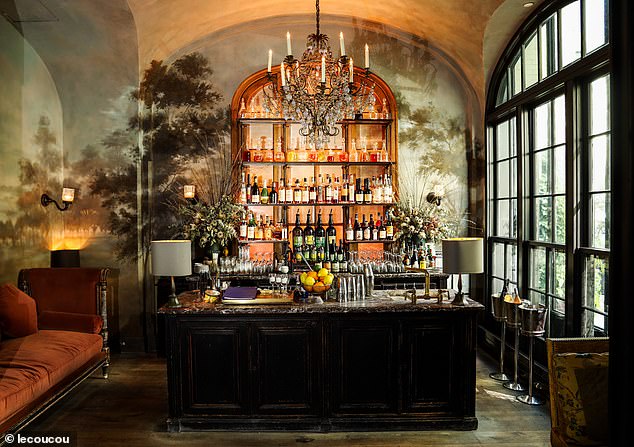 Wintour was similar, Cecchi-Azzolina adds, and was ‘absolutely horrid’ as she would ‘march in with no reservation and demand a table.’

The Vogue editor ordered a steak ‘very rare’ and requested it be served ‘immediately.’

‘God forbid it was the least bit overcooked. She’d look at the server as though he’d just served her rat and have it sent back and redone. You’d think the raw meat would make her less sanguine,’ he said.

‘She’d just walk in or call and say, ‘I’m coming.’ One time she came in and we were closing the back room and she insisted on sitting in the back room and we had to keep a waiter there and give her own waiter. Boy, was that waitress pissed.’

‘She doesn’t really talk to the staff. She’s like, ‘I’m having this, and that’s it.”

The announcement for the memoir, to be released December 6, follows a recent saga featuring James Corden and Balthazar owner Keith McNally.

In an Instagram post, the restaurateur recalled how the actor turned TV host had verbally abused his staff earlier this summer and shouted at one server: ‘You can’t do your job!’

Hours after posting that he had banned Corden from returning to the restaurant, McNally updated the story and said Corden called to apologize for his behavior.

‘James Corden just called me and apologized profusely,’ McNally wrote. ‘Having f***** up myself more than most people, I strongly believe in second chances.

‘So if James Corden lets me host his Late Late Show for 9 months, I’ll immediately rescind his ban from Balthazar. No, of course not.

‘But….anyone magnanimous enough to apologize to a deadbeat lay about like me (and my staff) doesn’t deserve to be banned from anywhere. Especially Balthazar. 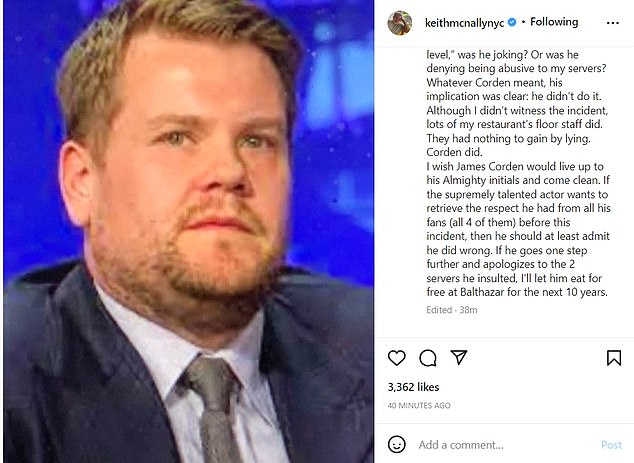 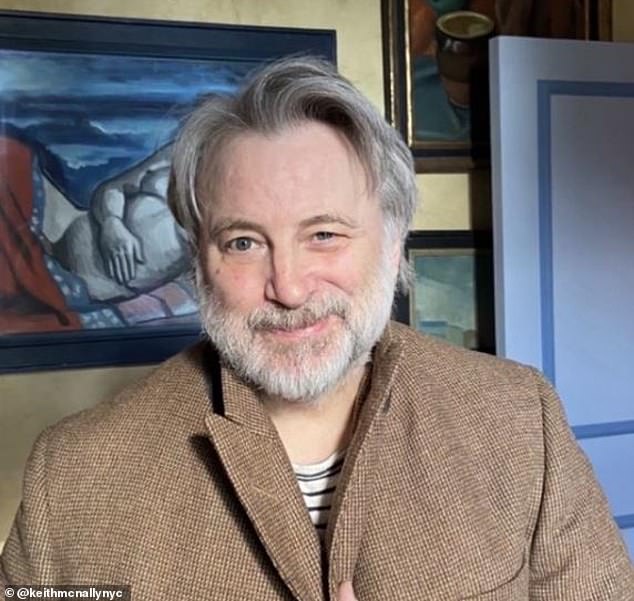 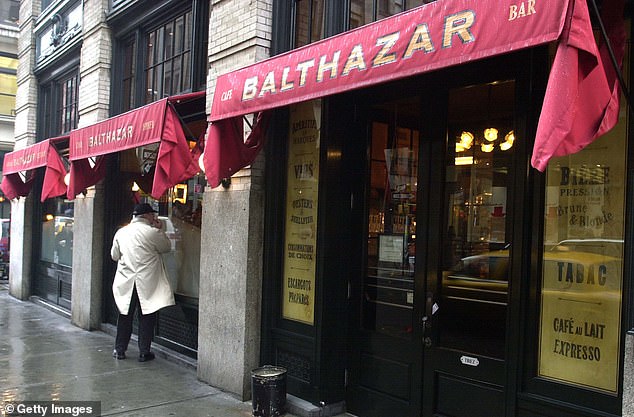 McNally: ‘James Corden just called me and apologized profusely, Having f***** up myself more  than most people, I strongly believe in second chances’ 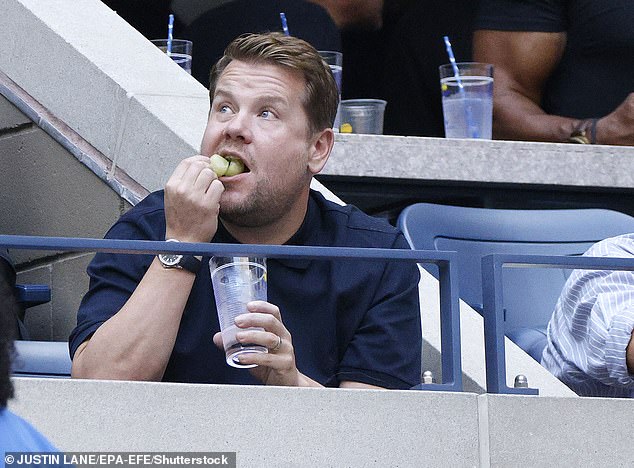 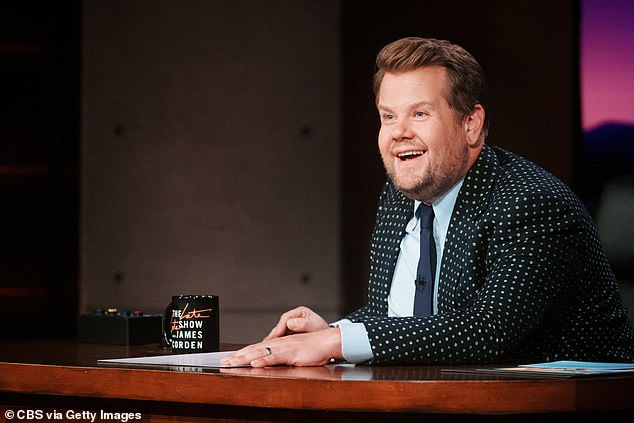 Tony award-winner Corden, who earns $36 million a year, shot to fame in the U.S. on the hit CBS show, and became well known for his cheeky British humor

The shocking allegations came months after the ‘Into the Woods’ star announced he would no longer be hosting the late-night talk show in 2023.

Tony award-winner Corden, who earns $36 million a year, shot to fame in the U.S. on the hit CBS show, and became well known for his cheeky British humor.

McNally, who has a colorful history of booting out celebrities of his exclusive restaurants, claims that Corden also behaved similarly at his former restaurant, Cafe Luxembourg, on several occasions and left one server ‘shaken’.

He posted earlier on Monday two separate examples of Corden’s ‘extremely nasty’ behavior at the French brasserie in New York’s Soho district on his Instagram account.

The 71-year-old started his post by calling the funnyman a ‘hugely gifted comedian’, before laying into his fellow Brit – who regularly tucks into meals with celebrities as part of a game on the show.