Boris Johnson’s Chief of Staff gave Manchester United’s Ed Woodward the impression that ministers would support their Super League plans at a meeting before the scheme was revealed, No. 10 sources claim.

Manchester United executive vice chairman Mr Woodward is understood to have met with the PM’s Chief of Staff Dan Rosenfield on Wednesday, April 14.

Mr Rosenfield – a Manchester United fan – reportedly told Mr Woodward that No. 10 would not block the controversial European Super League plan, which were announced the following Sunday.

The meeting went ahead without prior consultation with the Prime Minister, sources told The Sunday Times.

The doomed plans for a breakaway competition was widely condemned by fans, players and politicians alike, including the Prime Minister who said they amounted to a ‘cartel’.

Twelve clubs announced they had signed up to compete on Sunday but by Wednesday afternoon nine had withdrawn, including all six English teams — Arsenal, Chelsea, Liverpool, Manchester United, Manchester City and Tottenham Hotspur — who had initially backed the project. 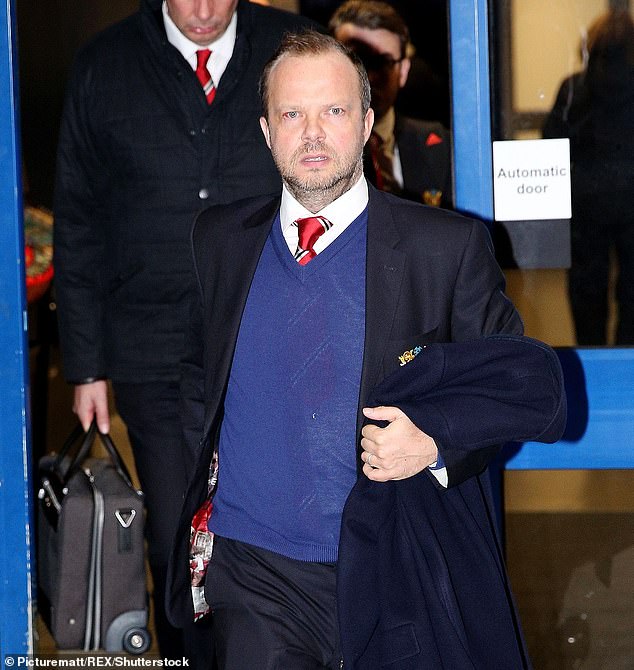 Boris Johnson’s Chief of Staff gave Manchester United’s Ed Woodward (pictured) the impression that ministers would support their Super League plans at a meeting before the scheme was revealed, No. 10 sources claim 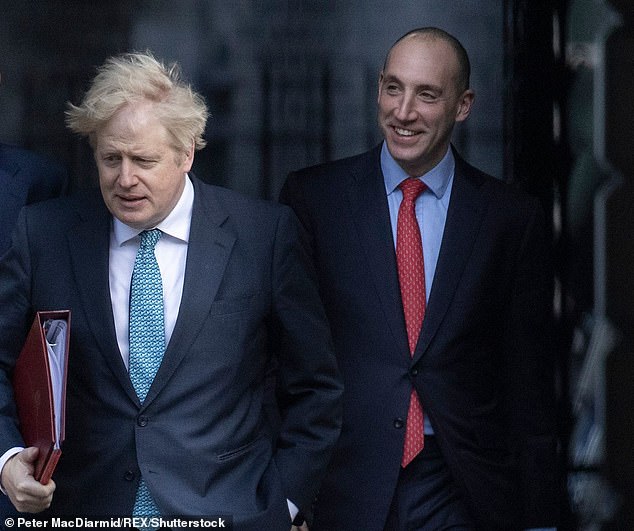 Following the meeting, Mr Woodward reportedly told those behind the league that the project had been given the go-ahead by the PM himself.

After news of the Super League broke the following Sunday, Mr Rosenfield is understood to have urged the Department for Digital, Culture, Media and Sport (DCMS) to tone down their condemnation of the plans.

He also reportedly urged Culture Secretary Oliver Dowden to lighten the tone of his reply.

The DCMS deny they faced requests to change their responses, the paper reports.

A No 10 spokeswoman said: ‘Ed Woodward had a meeting in Downing Street last week with officials.

‘The meeting was to discuss the safe return of fans and Covid certification, as part of ongoing work on events pilots.

‘The Super League was not discussed and the PM was not in the meeting.’

In the space of around three hours on Wednesday, all six English clubs involved in the European Super League plans dramatically quit the hated break-away competition following a huge backlash from fans.

Like dominoes, one-by-one clubs fell back into line with their Premier League rivals, a mere 72 hours after proposing a seismic – and much-maligned – change to the game. 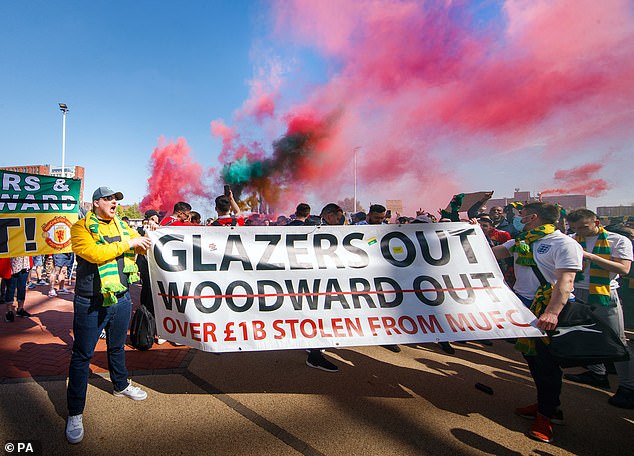 The doomed plans for a breakaway competition was widely condemned by fans (protests, pictured), players and politicians alike, including the Prime Minister who said they amounted to a ‘cartel’

In a huge victory for fans, who for days have vented their fury at the proposals, members of the so-called Big Six each released statements – some more grovelling than others – announcing they would be pulling out of the European Super League.

Already mega-rich Manchester City were first to officially break rank by announcing they would turn their back on the £4.6billion proposals.

Then, in a stunning twist to the saga, Arsenal, Manchester United, Liverpool and Tottenham Hotspur suddenly announced they would follow suit.

Meanwhile, Mr Johnson – who had earlier described the project as a ‘cartel’ and threatened to show the plans the ‘straight red card’ – said the decision to quit the breakaway league was ‘the right one’.

The plans for the breakaway league were also ‘unanimously and vigorously’ rejected by the other 14 members of the English top flight following a meeting on Tuesday. 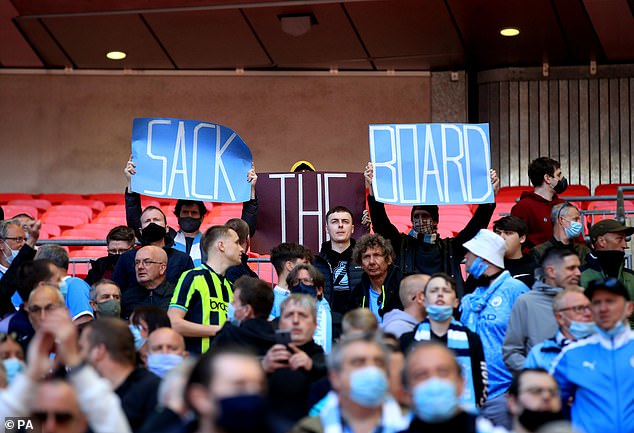 In a huge victory for fans (protests in Wembley, pictured), who for days have vented their fury at the proposals, members of the so-called Big Six each released statements – some more grovelling than others – announcing they would be pulling out of the European Super League

The dramatic collapse led organisers behind the European Super League to announce a suspension to the project.

But, in warning shot that indicated that the saga might not yet be fully over, organisers behind the breakaway competition released a statement saying that ‘status quo of European football needs to change’.

And fans organised mass protests throughout the last week against the owners of the six clubs. 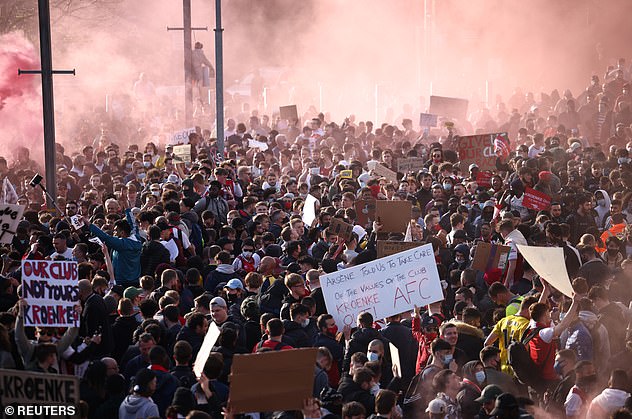 Pictured: Arsenal fans protest against owner Stan Kroenke after the failed launch of the European Super League. Hundreds of fans descended on North London’s Emirates Stadium on Friday night ahead of the team’s game against Everton

A review led by Tory MP Tracey Crouch will consider whether new criteria will be introduced for billionaire owners and if fans should be given greater representation at board level.

And pundits and fans have called for the teams involved in the league to be deducted points as punishment.

But Leeds head coach Marcelo Bielsa said he is not in favour of the clubs being sanctioned for attempting to form the competition.

Bielsa has been highly critical of the doomed ESL plans, but feels the current system ‘is not up to standard’. 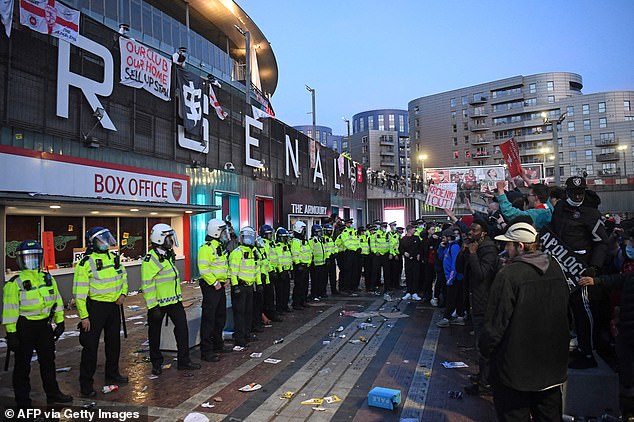 A line of police face supporters as they protest against Arsenal’s US owner Stan Kroenke, outside English Premier League club Arsenal’s Emirates stadium in London on Friday

He said: ‘I don’t think that the path for a solution is for these clubs to be punished, but to convince what is best and to come up with rules of acceptance in general and make sure these rules are adhered to.

‘When a rule is broken this forces a sanction (and this) means that the process before that was not efficient.

‘And the leadership of the organisation to administer the interests of everybody is to create rules that everyone is able to adhere to as they have all accepted them.

‘I am of the opinion that punishment is more for authority and shows that the quality or the efficiency of the rules was not up to standard.’ 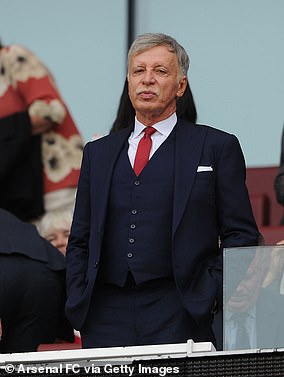 The 73-year-old American billionaire is heavily involved in sport as owner of Kroenke Sports and Entertainment with Premier League side Arsenal among the biggest guns in his portfolio.

His company has been involved with the Gunners since 2007 and he took complete control three years ago.

Kroenke was able to navigate his way around NFL rules preventing ownership of teams in other markets by having the Avalanche and Nuggets in his wife’s name. Ann Walton is the daughter of Walton co-founder James Bud Walton.

He also has the Colorado Mammoth team in the National Lacrosse League and, since 2017 has been involved in epsorts, owning teams in leagues for the video games Overwatch and Call of Duty.

Despite his involvement in sports watched by millions Kroenke prefers to avoid the spotlight and has the nickname ‘Silent Stan.’ He is estimated to be worth around $10billion. 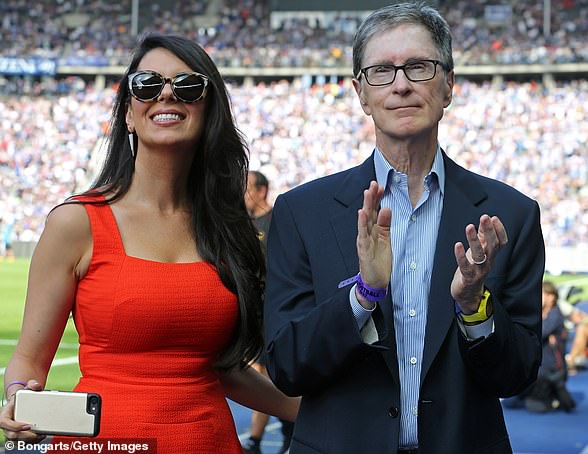 They also own the Boston Red Sox (baseball), as well as having stakes in Roush Fenway Racing (NASCAR) and Minor League baseball team the Salem Red Sox.

Henry, worth an estimated $3billion who is married to his wife Linda Pizutti (pictured together), made his money from trading company JW Henry and Co before buying the Red Sox with his partner Tom Werner – the Liverpool chairman.

Under their control in 2004 the Red Sox won a first World Series in 86 years.

They also ended Liverpool’s 30-year wait for a championship when they lifted the Premier League last season.

But they will now face serious questions from the Anfield supporters following last night’s news. 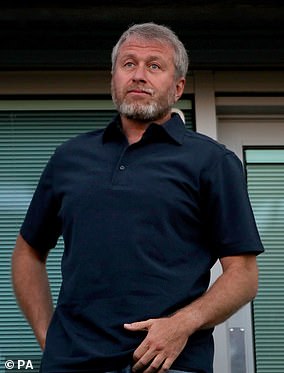 Abramovich and his billions arrived at Chelsea in 2003 and turned them into a Premier League giant.

Since he took ownership of the club and invested heavily in big-name managers and players, they have won 16 major trophies, including five Premier League titles and the Champions League.

Believed to be worth around $15billion, according to Forbes, Abramovich also owns stakes in steel company Evraz and Norilsk Nickel – a Russian mning company.

A political figure in his homeland, he was governor of the Chukotka region and donated more than $2million to build schools, hospitals and infrastructure.

The 53-year-old is known to have close relationships with former Russian leader Boris Yeltsin and current president Vladimir Putin. 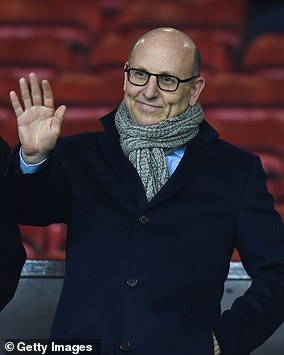 Florida-based Glazer is part of the family who have controlled Manchester United since 2005. They also have NFL team the Tampa Bay Buccaneers.

United have not won the Premier League since 2013 but during Glazer’s tenure have lifted 12 major prizes and, according to Deloitte, in 2021 are the world’s fourth richest club behind Barcelona, Real Madrid and Barcelona with revenue of $580m.

The Galzers’ money comes from their sporting empires and real estate across the US.

Likewise they took charge of United, according to Forbes, for $1.4bn with the club reported to be worth more than $3bn. 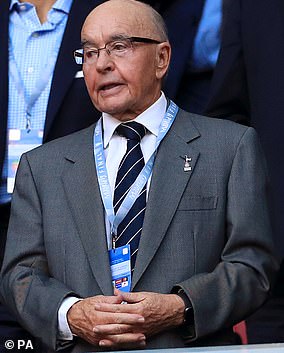 The 84-year-old Lewis is worth around £4billion, according to last year’s Times Rich List.

Born in London he entered the family catering business at 15 but in the 1980s moved into currency trading.

He is the major investor in Tavistock Group which owns more than 200 companies in 15 countries.

Lewis lives in the Bahamas as a tax exile. He is reported to have an art collection worth an estimated $1billion. 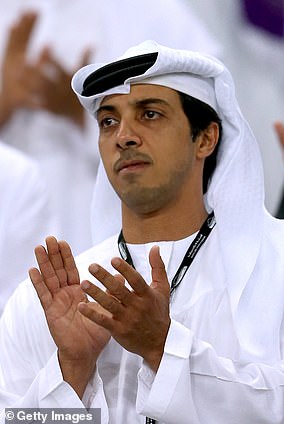 The money arrived at Manchester City in 2008 and with Sheikh Mansour, a member of the Abu Dhabi royal family, pulling the purse strings, they never looked back.

Cash was quickly pumped into every area – academy, training ground, playing staff, coaching – and City quickly caught up with, and overtook their neighbours.

They have won four Premier Leagues in that time, look set for a fifth this season and are in the semi-final of the Champions League.

The Abu Dhabi group is the majority owner of the City Football Group which boasts Man City as their flagship team.

They also have stakes in teams in the United States, Australia, India, Japan, Spain, Uruguay, China, Belgium and France.