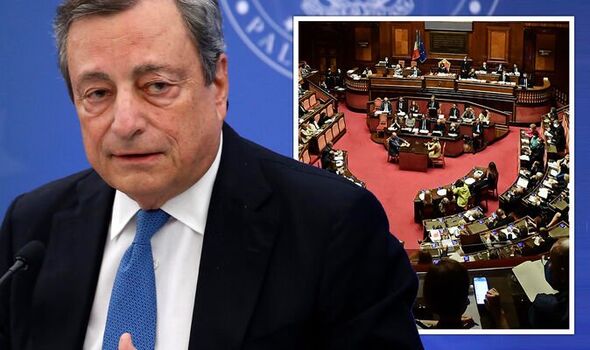 The former European Central Bank President told his Cabinet, according to a statement released by his office: “I will tender my resignation to the president of the republic this evening. The national unity coalition that backed this Government no longer exists.” The Prime Minister’s resignation could now trigger national elections in a matter of weeks after other coalition parties demanded a vote if 5-Star no longer backed the Government.

Earlier today, Mr Draghi had survived a confidence vote, who had become a central point for tensions within his own Government as parties prepare to battle it out in a national election next year.

But Italy was plunged into political chaos when the 5-Star party decided to boycott the crunch confidence vote.

The move risked undermining efforts to secure billions of euros of crucial funds from the European Union, tackling a brutal drought and reducing the country’s reliability on Russian gas following Vladimir Putin’s war in Ukraine.

Mr Draghi had previously made the bold move by insisting he would not want to lkead a Government without the support of coalition partner 5-Star.

The rival party came out on top in the last Italian election in 2018 but has endured a troubled time recently with defections and a loss of voter support.

Yes, there has been progress on climate. No, it's not nearly enough