Matt Hancock warns hug ‘carefully’: Brits are urged to be cautious as country unlocks tomorrow with pubs finally allowed to serve customers inside and theatres, cinemas and art galleries sold out ahead of reopening

Matt Hancock today warned people to ‘be careful’ when hugging others on Monday, as England prepares to finally unlock from Covid lockdown.

Theatres, cinemas and art galleries will be allowed to open across the country for the first time this year when more lockdown measures are eased tomorrow.

Restaurants and pubs will also be able to serve customers indoors since December.

Ahead of the big unlock, venues have already begun selling out, with the famous Globe Theatre reportedly sold out until the middle of next month

And Grayson Perry’s Manchester Art Gallery exhibition is also said to booked out throughout the rest of May.

But delivering a stark reality check, the Health Secretary warned about the ‘risk’ of meeting indoors – as fears continue to raise over the spread of the Indian variant in the UK.

Speaking to Sky News this morning, Mr Hancock said: ‘We should all be careful, we all know the risks, outside is safer than inside – so even though you can, from tomorrow, meet up inside, it’s still better to meet up outside. 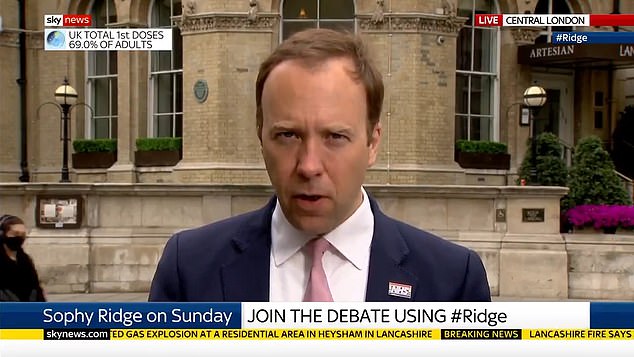 Matt Hancock today warned people to ‘be careful’ when hugging others on Monday, as England prepares to finally unlock 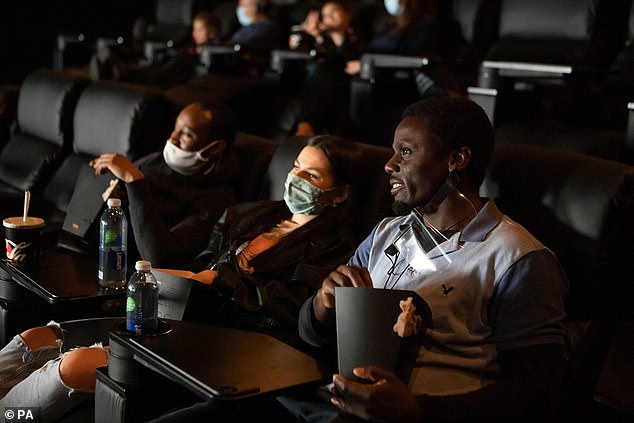 Theatres, cinemas and art galleries will be allowed to open across the country for the first time this year when more lockdown measures are eased tomorrow 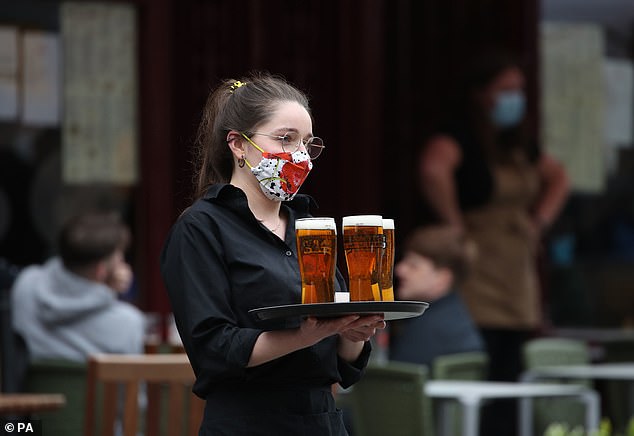 Restaurants and pubs will also be able to serve customers indoors since December. Pictured: A waitress at a bar brings out pints to customers in Edinburgh 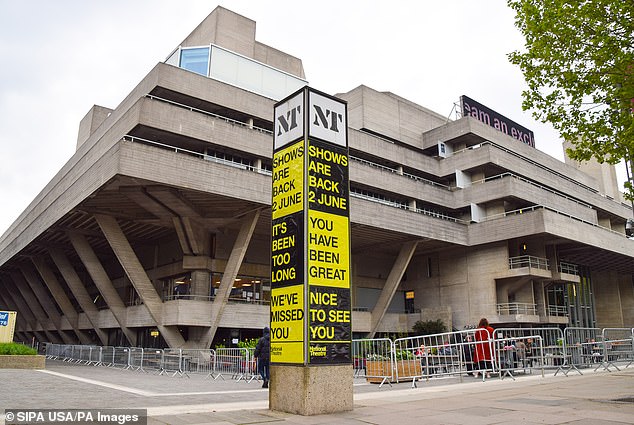 Ahead of the big unlock, venues have already begun selling out, with the famous Globe Theatre reportedly sold out until the middle of next month. Pictured: The National Theatre in London is also opening tomorrow

‘Of course there are people who have been yearning to have some physical contact – you should do that carefully.

‘If you’ve had both jabs more than two weeks ago, that’s much safer.

Asked who he planned to hug first, with the Government set to relax rules tomorrow on contact with close family and friends, he said: ‘I was asked on Tuesday and I said the thing I’m really looking forward to is hugging my mum, she’s had two jabs – actually dad got quite upset about that.

‘I’m really looking forward to hugging you as well, dad, but we’ll probably do it outside and keep the ventilation going: hands, face and space.’

It comes as art venues will be able to indoor areas for the first time this year.

Measures are being lifted on Monday to allow all art venues, museums and theatres to open as part of a raft of new lockdown easing measures.

But, with Britons now having had their freedoms curtailed for the last five months, many are now rushing to get back to visit their favourite cultural sites.

According to the Sunday Times, Shakespeare’s Globe in London tickets are sold out until the middle of next month.

And the paper reports that Grayson Perry’s upcoming exhibition at Manchester’s has also booked out until the end of next month.

The vast majority of free tickets up until June were reportedly booked within eight hours of going online.

A waiting list has been set up, with opening times to be extended, with 500 people already signed up.

Similarly, tickets for exhibitions at the Tate Modern and David Hockney’s exhibition at the Royal Academy have also sold out until later this year.

In the cinemas, families are busy booking up Peter Rabbit 2, while Oscar-winning Nomadland is expected to be a firm favourite with movie-fans.

It comes as, despite his cautious tone, Mr Hancock backed England’s vaccine roll-out to beat the new Indian Covid variant.

He said there was evidence existing jabs could deal with the highly contagious new strain and keep the move out of lockdown on track.

The Health Secretary also said that a new Oxford University investigation showed that the innoculations available were effective against the variant which is now dominant in some Northern towns.

Four people are known to have died from the Indian variant but appearing on TV this morning Mr Hancock said those who had been hospitalised were ‘largely people who are eligible for the vaccine but have not taken it’.

It came as Boris Johnson today pledged to increase the speed of Britain’s vaccine roll-out to a million jabs a day in an attempt to beat the increasing prevalence of the variant amid fears it could derail the country’s exit from lockdown.

Appearing on Sky’s Sophy Ridge on Sunday he said: ‘There’s new very early data out from Oxford University, and I would stress that this is from the labs, it’s not clinical data, and it’s very early. 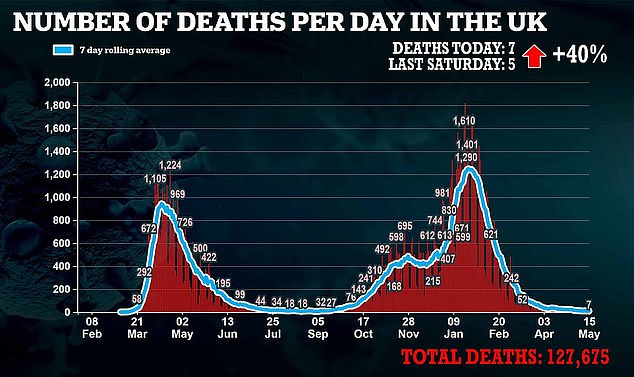 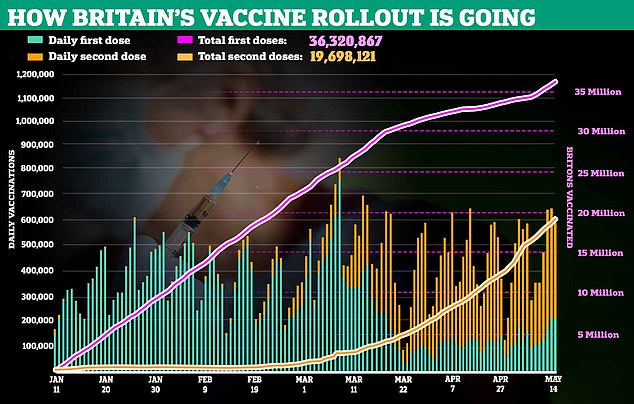 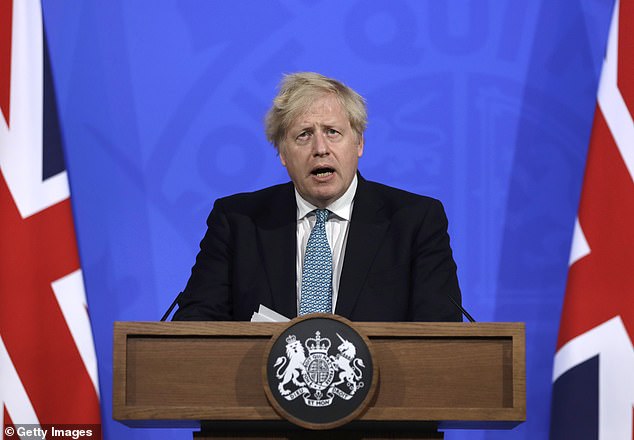 Boris Johnson (pictured) will proceed as planned with tomorrow’s reopening of pubs and restaurants for indoor dining, but has warned that the Indian variant poses ‘a real risk of disruption’ to the end of social distancing on June 21

‘But it does give us a degree of confidence that the vaccines work against this Indian variant, but it is clearly more transmissible and has been spreading fast in the groups where there’s a cluster.

‘That means that we can stay on course with our strategy of using the vaccine to deal with the pandemic and opening up carefully and cautiously but we do need to be really very vigilant to the spread of the disease.

‘We have a high degree of confidence that the vaccine will overcome.’

But Mr Hancock did strike a note of more caution over the final release from lockdown on June 21, saying the final decision would not be taken until June 14.

Sage’s Professor John Edmunds urged the country not to panic over the new variant, telling the BBC’s Marr that those who have been vaccinated are unlikely to experience more than mild Covid symptoms from it.

Meanwhile a growing number of questions are also being asked about the failure to make people arriving into the country from India quarantine earlier, after it emerged the government failed to put India on the ‘red list’ even though infection rates were nearly 50 times higher among arrivals from the country than the rest of the UK.

Of the 3,345 people touching down in Britain from India between March 25 and April 7, some 4.8 per cent tested positive for Covid, compared to just 0.1 per cent of people in England, Public Health England data shows.

It is the latest statistic to be brandished at the Prime Minister, with pressure growing over his decision to delay banning travel from the Asian nation until late April, even though flights to and from neighbouring Pakistan and Bangladesh were restricted two weeks earlier.

Labour’s Yvette Cooper today called for tomorrow’s lifting of the ban on international travel to be halted.