May on course to cancel third vote and agree a lengthy delay to Brexit: Boris torpedoes PM’s hopes ahead of EU summit amid fury among Brexiteers for calling them ‘unpatriotic’

Theresa May could now shelve the third vote on her deal and make her next move asking the EU for a Brexit extension as her own MPs including Boris Johnson refused to back her.

Mrs May’s final pitch to Tory Brexiteers backfired yesterday after saying her opponents are unpatriotic if they do not back her Brussels divorce but warned them: ‘We will not leave the EU for many months, if ever’.

The Prime Minister is said to be willing to call off a third vote on her deal if she ‘had no chance of winning’ and crank up the pressure on her MPs by holding it just days before Britain is due to leave on March 29.

Boris Johnson last night urged MPs to vote down Mrs May’s deal for a third time if it is put to a vote this week and warned in his Daily Telegraph column that it gives the EU an ‘indefinite means of blackmail’ against the UK.

Today crisis talks with the DUP continue and if the Northern Irish party backs Mrs May’s deal a number of Eurosceptic Tories could follow – but a senior ERG source predicts that even with the DUP on board, the PM would lose by 30 to 40 votes.

David Davis says if the DUP moves then she has a ’50-50 chance’ of winning but said still may not vote for the deal while former ministers Priti Patel and Dominic Raab are expected to rebel even if Mrs May manages to win over Arlene Foster’s party.

Mrs May could now tee-up a longer delay to Brexit at an EU summit on Thursday ensuring Tories who vote down her deal must also accept the blame for a lengthy delay to leaving the EU. 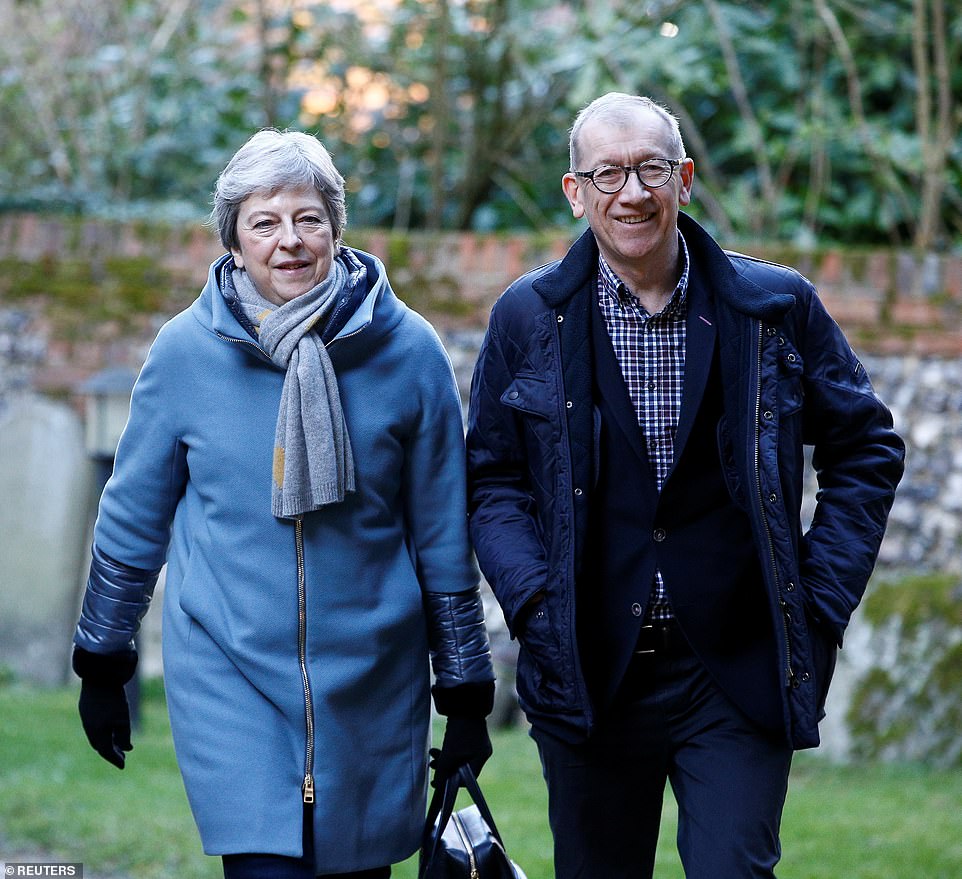 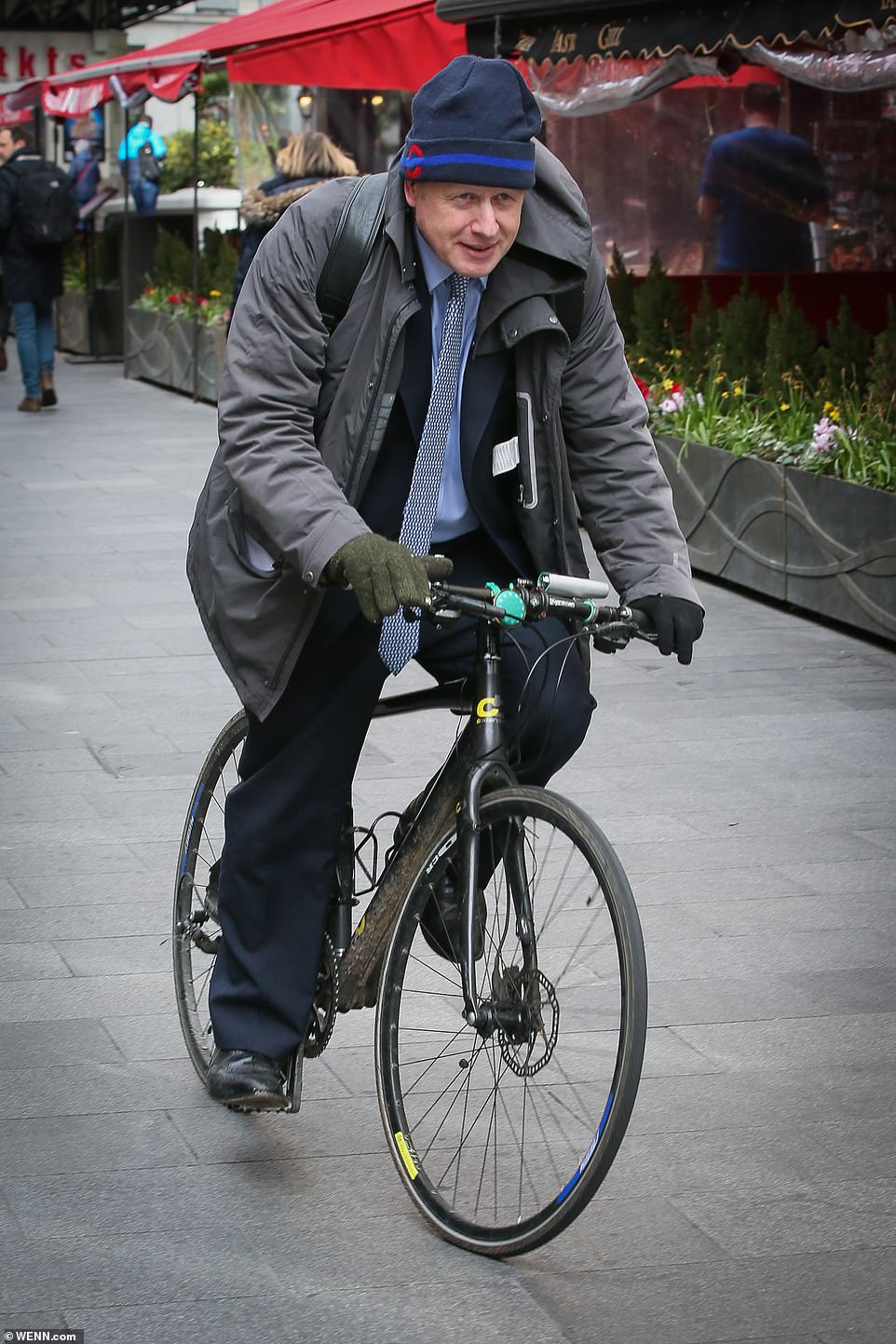 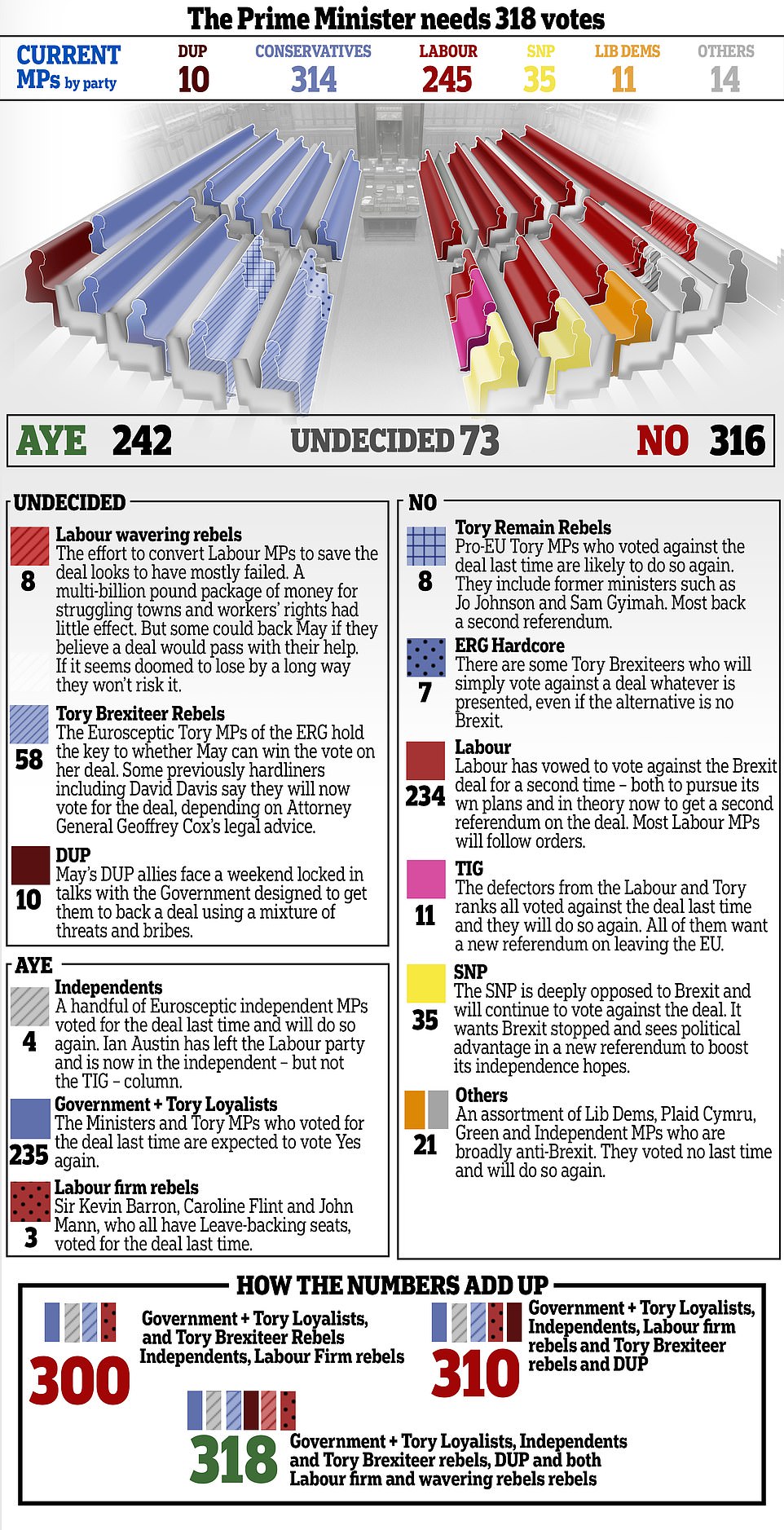 In a direct attack on Mrs May, Boris Johnson paints her and her team as collaborators in the ‘final sabotage of Brexit’ just 11 days before Britain is due to leave the EU.

Brexit: What happens next?

MPs twice rejected Theresa May’s Brexit deal. They also voted against leaving with no deal, and now voted in favour of a delay.

What will happen next?

MPs have supported a delay, so May will have to request an extension to Article 50 from the EU.

Could Brexit be delayed?

If other member states agree to it, Brexit will be postponed, but May has said that this should be for no longer than three months.

If, however, MPs do not support her deal, she warned that the extension could be far longer.

Could Brexit be stopped?

May has warned this is a possibility. While she will not revoke Article 50 herself, she has warned political chaos could see the Government replaced by Jeremy Corbyn or another pro-Remain administration.

Will the Prime Minister face a motion of no confidence?

It is possible. Labour leader Jeremy Corbyn has insisted he will only call another vote of no confidence if he has a chance of winning – but in January Mrs May precipitated one herself.

Will May just resign after a second defeat?

Unlikely but not impossible. Defeat would be another monumental blow to the PM’s political authority.

Will there be a general election?

There are mounting calls for one. Tory MP Charles Walker said yesterday if the House could not pass the deal, the current Parliament probably needs to be replaced so a new Government can be formed to tackle Brexit.

One of the advantages of an election is it would be much quicker to organise and resolve than a second referendum.

Could there be a second referendum on Brexit?

There are mounting demands for a new public vote – but probably not currently a majority in the Commons for it.

A new referendum would take at least six months to organise and run. This could be optimistic as there is no consensus over what the question might be.

The former foreign secretary urged her to postpone the vote and use a forthcoming EU summit to seek ‘real change’ on the Irish backstop.

Mr Johnson said: ‘It would be absurd to hold the vote before that has even been attempted.’

Despite this pressure Mrs May received a string of major endorsements for her Brexit deal last night that gave fresh hope it could pass within days.

In a significant boost for the PM, former Chancellor Norman Lamont urged his fellow Brexiteers to focus on the ‘prize’ of leaving the EU – and back the deal.

Writing on the page opposite, the Eurosceptic grandee warns wavering MPs that ‘history will not understand if it is Conservative MPs who prevent us claiming our self-government’. Mrs May is hoping to build momentum behind her deal today with an agreement with the DUP that could bring dozens of Eurosceptics on board.

The Nobel Peace Prize winner praised Mrs May for securing ‘substantive’ concessions on the backstop, adding: ‘The chances of the PM getting the deal through Parliament have improved.’ Former Vote Leave chief Matthew Elliot also came out for the deal, warning Euroscptic MPs: ‘It’s May’s deal or nothing.’

But, with the trickle of Eurosceptic MPs declaring their support still failing to turn into a flood, the prospects for the deal remain on a knife edge. Mrs May was last night still deciding whether or not to press ahead with tomorrow’s planned vote on her Brexit deal. Philip Hammond and Liam Fox both said it could be pulled if it looked like it would be defeated a third time.

Downing Street was braced for Boris Johnson to ‘double down’ on his opposition. And Tory sources said fellow leadership hopeful Dominic Raab was also indicating he would help Labour vote down the deal for a third time.

Some senior figures believe tomorrow’s vote should be delayed until next week, by which time Mrs May is expected to have requested an extension of Article 50. One Cabinet minister urged the PM to delay, adding: ‘Whenever it comes it is going to be incredibly tight. I think the DUP will come across but we also need Boris and Raab and Rees-Mogg to have a chance. Even then, we will need some more Labour MPs to come on board.’

At the start of a crunch week on Brexit: 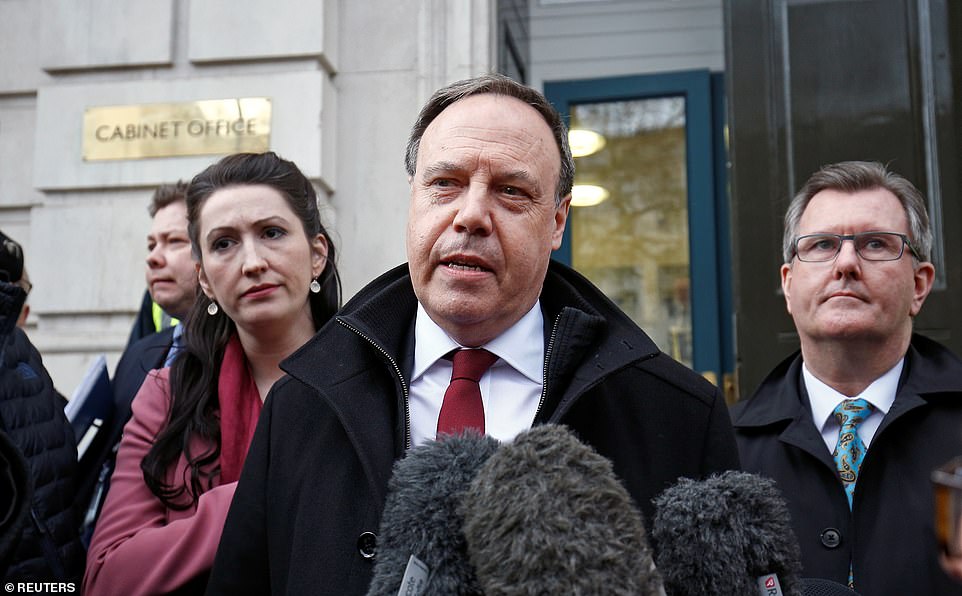 Ministers believe they are close to sealing an agreement with her DUP backers, which could see dozens of Eurosceptic Tories reluctantly fall into line behind the deal. Mr Hammond yesterday indicated the DUP could be handed more cash for Northern Ireland if they agree to back the PM’s deal.

He told the BBC’s Andrew Marr show: ‘This isn’t about money. It’s about a political assurance – well, look, we are coming up to a spending review and we will have to look at all budgets, including devolved block-grant budgets.’

Gordon Henderson, a Tory MP who has voted against the deal twice, told the Mail: ‘If the Government can find a formula that satisfies our DUP colleagues, then it will satisfy me.’ Ministers were helped last night by Lord Trimble’s decision to drop his opposition to the backstop plans in the light of fresh legal assurances that it could only be temporary.

In a paper for the Policy Exchange think-tank, he said: ‘The Government has succeeded in securing substantive changes that will affect and limit the impact of the Irish backstop’. The intervention from Lord Lamont, a patron of the hardline Leave Means Leave organisation, could also prove significant. 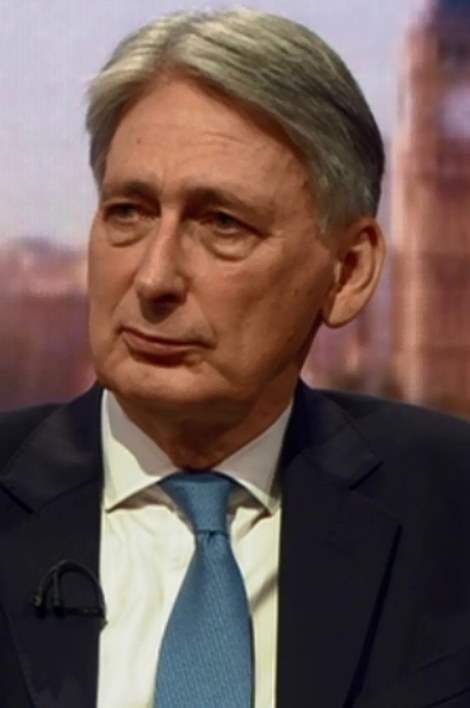 The former Chancellor, who served in the Thatcher government, warns fellow Eurosceptics that Brexit could be lost altogether unless they stop their infighting and back the PM.

He said it was ‘wishful thinking’ to believe that Parliament wouldn’t try to stop Brexit once it had been delayed. And he said there would be ‘all to play for’ in the second round of talks with Brussels, as long as the withdrawal deal was passed. He added: ‘To assert as some Eurosceptics do that it is preferable to remain in the EU than to accept Mrs May’s deal is absurd. The PM’s deal is far from ideal. But it has one overwhelming advantage. Under her deal we will definitely leave.’

Tory MP Daniel Kawczynski, a member of the European Research Group of Eurosceptic MPs, said: ‘The mood is changing. People are getting tired of the infighting at Westminster and in the Conservative Party. They expect us to get this across the line.’

Emma Lewell-Buck, who resigned from Labour’s front bench last week to vote against a second referendum, said she and other like-minded MPs wanted to see Brexit delivered with the current deal.

But some Tory hardliners suggested they would never back down. Andrea Jenkyns, a prominent member of the ERG, said: ‘The British spirit is to fight on and not to back down to threats.’

Jeremy Corbyn yesterday warned he was ready to call a vote of no confidence in the Government this week if Mrs May’s deal is voted down again, potentially triggering an election.

He also plunged Labour’s Brexit policy into fresh confusion after revealing he could campaign to leave the EU if he succeeds in forcing a second referendum.

Third time lucky? So, what on earth happens next?

SCENARIO 1: THIRD TIME LUCKY Theresa May’s deal is finally approved. This is how it would play out.

TUESDAY: Prime Minister wins Meaningful Vote No 3 (just) after DUP and most of the European Research Group fold.

TUESDAY: MPs narrowly defeat Mrs May’s attempt No 3 to secure her deal. PM says she will now go to Brussels to ask for more time.

SCENARIO 3: NO DEAL BY SABOTAGE

We leave with no deal after a guerrilla war by Tory Brexit ‘ultras’.

TUESDAY: MPs narrowly defeat Mrs May’s third vote on her deal. PM says she will go to Brussels to ask for more time.

MONDAY, MARCH 25: Hardcore No Deal Tory Brexiteers support a no-confidence vote in May.

TUESDAY: Speaker John Bercow throws a spanner in the works by ruling that putting the deal to a third vote breaches Commons rules over repeated votes on same terms. Mrs May forced to go to Brussels with no approved deal.

OR… She loses vote of no confidence. No Deal on March 29.

Mother 'killed her two young daughters before taking her own life'