Somewhere amid the din of the Rod Laver Arena, Rafael Nadal discovered something more precious than winning this year’s Australian Open or his historic 21st grand slam title: the freedom to just play.

It was, Nadal explained, a strange and wonderful feeling after spending so many months managing the pain and enduring the limitations of his chronically injured foot. 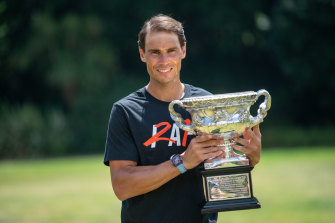 Something similar can be said about the city of Melbourne.

Somewhere in that heaving arena, on the Saturday night of Ash Barty’s drought-busting win and throughout the epic struggle that unfolded between Nadal and Daniil Medvedev, we pushed aside the limitations of living in a pandemic and rediscovered what it is to have fun.

A sleepless, sore and immensely proud Nadal said on Monday this was an unforgettable Australian Open for himself and Barty. He added that it would also be remembered as a great Open for reasons that don’t have much to do with tennis.

“After all the things we went through the last couple of years, with lots of people suffering a lot and not able to go out for a lot of days here in Australia, it is just an amazing feeling to see the Rod Laver Arena full,” he said.

Australian Open chief executive and tournament director Craig Tiley believes the stunning end to the tournament will relegate the debacle at its start: the detention and deportation of the world’s No.1 player because of his refusal to be vaccinated against COVID.

Tiley has been involved in tennis as a player, coach and administrator since the 1980s, and believes that what this tournament produced – the first Australian to be Australian Open singles champion in 44 years and the first man to win 21 grand slam singles titles – will never be beaten for sheer weight of history and the popularity of both results.

“I have been around tennis for a while,” he said. “There is nothing that I think will come close to it.”

The weekend also served as a reminder that, although Tiley made serious misjudgments in his determination to find a way for Djokovic and other unvaccinated players to compete in Melbourne, he remains deeply admired and respected among international players for how he directs the tournament.

This will ensure he retains the backing of the Tennis Australia board through whatever internal reviews are conducted into the Djokovic mess.

It was telling that after Nadal won his final point against Medvedev, the first person he hugged was Tiley.

“I know he went through some very hard times this year and he was always there, always supporting the tennis, supporting the players and thinking about what is the best for the sport,” Nadal said when questioned about their courtside embrace.

“I really believe that Craig is a great person and a very important ambassador for the sport of tennis.

It is a remarkable turnaround for a sports administrator who the previous week was booed when he walked on court to present Sam Stosur with a bouquet of flowers after her last Australian Open match.

One of the reasons Nadal respects Tiley is that, when the Australian Open chief was being pilloried for his role in the Djokovic deportation scandal, he quietly absorbed the criticism in the belief that the media and public focus would soon return to the tennis and the players.

Nadal was one of several prominent competitors who visited Tiley to make this very point. The players, as they made clear in their public comments, were frustrated that Djokovic’s absence was pulling attention away from what they were here to do.

Like Nadal’s journey to the final, this tournament began with uncertain steps. The first day of play, coming within hours of Novak Djokovic’s failed Federal Court challenge against deportation, coincided with the peak of Victoria’s Omicron epidemic.

The crowd was well below a 50 per cent cap set by the state government and older patrons, nervous about mixing in crowds, stayed away.

By the finals on Saturday and Sunday night, Omicron case numbers and hospital admissions were falling, the main stadium was at 80 per cent capacity and the site’s garden square area was jammed with people watching the match on a big screen.

Melbourne lord mayor Sally Capp was a face in the crowd on both nights. “There was a caution and a tentativeness on day one of the Australian Open,” she said. “By the end you saw crowds of people squashed in and absolutely having fun.

“I think it was a reminder for us about the sort of fun, stimulation and serendipity that happens when you get people together en masse. Following what has been a self-imposed lockdown as a result of Omicron, the Australian Open really said Melbourne is open.”

Sports Minister Martin Pakula was part of the government decision to increase crowd limits at the tennis from 50 per cent to 65 per cent and, finally, 80 per cent. He said the tennis was brilliant and the broader impact better.

“On a deeper level it felt like this was a weekend where fans threw caution to the winds and remembered how much they love to eat and drink and cheer and celebrate together,” he said. “To me, it was very moving and a reminder of why we do the big sporting events so well.”

The vibe at Melbourne Park was reflected in the number of people moving around the city. According to data collected by the City of Melbourne, foot traffic in the city on Saturday returned to three quarters its pre-COVID levels. The shadow epidemic, where people voluntarily restrict their movements as a health precaution, had started to lift.

Tiley declared that this year’s tournament would be defined by its final weekend, not the spectacle which preceded its start. He’ll get no argument from Nadal and Barty and not much from anyone who appreciates what we saw over those extraordinary final two days.

News, results and expert analysis from the weekend of sport sent every Monday. Sign up for our Sport newsletter.