I am walking in the graveyard, among the cedars, oaks and pines, among the dead. I’d like to say it’s quiet, which of course it is – that’s its nature – but it is also bordered on two sides by roads. Life motors by in a wake of sound.

But here life is brought to a halt, and in the halting silence, family roots go deep. Among the cedars, oaks and pines are the markers to eternity, the plaques, headstones and crosses, and behind each one a funeral, and before that, a life. 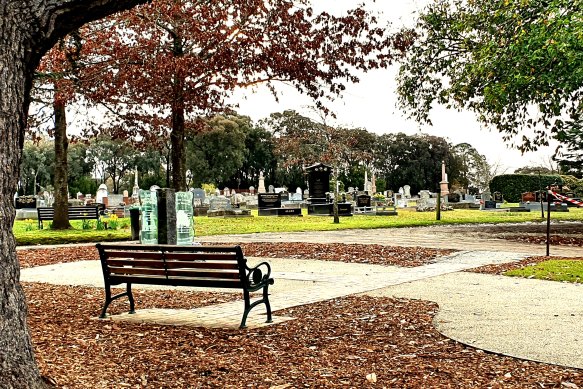 Among the oaks, a plaque on stone will soon be laid alongside the other memorials.Credit:Warwick McFadyen

The cemetery is on a little hill – what would have been the edge of town when hill became graveyard in 1858. It was first divided according to faith – as in life, so too death – and now it has a non-denominational section.

A memorial remembers the children and adults in unmarked graves: 350 kids and 341 adults, according to the burial register. They are not lost or forgotten, the memorial whispers.

As I walk, there’s a whispering, too, in my heart: where, what type, but mainly there is how to place memory in stone?

Soon among the oaks, a plaque on stone will be laid alongside the other plaques. It will bear my son’s name. He died three years ago. In the giant yaw of that time, the eternity of one day opened up like a flower.

Yet life was not long for our son. He was 21. We have kept his ashes close, storing how to mark his passing in the same place as his urn – on a shelf, waiting for night’s descent to become merely shadow, to become the remains of that day. But now we are ready.

We have met a cemetery trust representative to decide on a marker on a hill in a town he was born into and where he died. His place is on the edge of a garden bed. It’s sheltered, and a park bench is opposite the stone where the plaque will be mounted. It’s close enough for our words to float onto his name without being blown away. Of course, no gale, no gust could do that. Distance now means nothing, being without measure. We hold each other close, tears well up and fall, and we nod, yes this is the place. He’d like it here. It’s a consolation of grief for parents.

Perpetuity has a price tag, as it must, for it exists in the present day. A graveyard must be well cared for, lawns mown, garden beds maintained. And there are different tiers of mourning. The bigger the marker the greater the cost. The cosmos would wink at that. Perhaps it’s whispering too: have faith, I have more perpetuity than you’ll ever need.

Even the grandest monuments will one day grow moss, their words chiselled down by wind and rain. All you can really ask is for a little more time. But graveyards are the great leveller. Time rubs against the skin of everyone.

This, then, is the utter last stop, where ash becomes earth, the final accounting of a life, the letting go. His ashes will go beneath the plaque – the heart, the smile, the laughter, the boy entire of love – to earth.

And within us there is the invisible, unbreakable thread without measure, the echo of love.