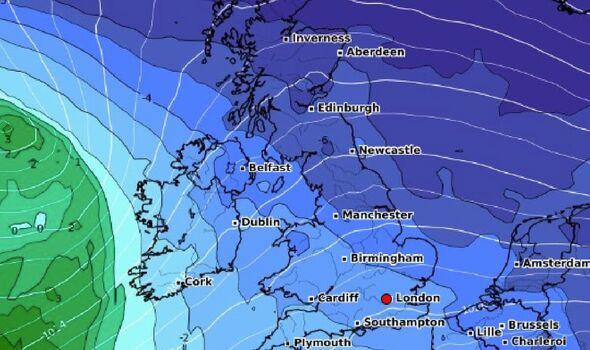 The Met Office has issued a two-day weather warning for ice and snow covering parts of Scotland and the whole of Northern Ireland from 9pm on December 25 to 6pm on December 26. It warns: “Some roads and railways likely to be affected with longer journey times by road, bus and train services. A very small chance of interruptions to power supplies. Probably some icy patches on some untreated roads, pavements and cycle paths.”

Britons are advised that “wintry showers are likely to combine with some icy surfaces to cause some travel disruption, mainly to higher routes”.

The yellow weather alert goes on to caution that “ice may cause some delays and difficulties at first on Monday”.

In Scotland, the regions and local authorities affected are:

Meanwhile, the whole of Northern Ireland is covered by a warning for ice from midnight on December 26 until 6pm on the same evening.

Commenting on the latest weather outlook for the UK, Jim Dale, meteorologist for British Weather Services, said: “It starts turning colder again through the latter part of Christmas Day and into Boxing Day.

“Cold air comes down from the Arctic through the next 24 hours, although it may stall halfway down the country and move away.

“However, Boxing Day is going to be much colder for many.”

Elsewhere on Monday, the Met Office forecasts there will be “some sunshine for all”.

It said in its latest forecast for Boxing Day: “Mainly dry in the southeast but wintry showers will affect some northwestern areas, with further snow especially over Scottish hills. Colder generally, emphasised by the wind.”

The outlook for Tuesday, according to MeteoGroup UK, “starts with widespread rain across most of the UK”.

The forecaster added: “The East will start dry and overcast before the rain moves in. Showery in Scotland.

MIKE COLMAN mourns the death of a legend in Shane Warne