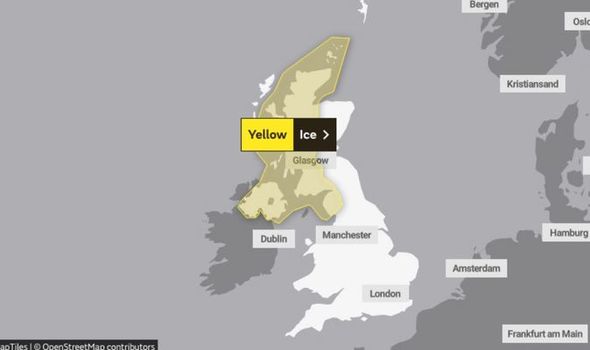 The Met Office has issued an early morning yellow ice warning across the northern tip of the United Kingdom.

Britain’s national weather service made the announcement shortly after 5am.

It will affect parts of Cumbria, large swathes of Scotland and most of Northern Ireland.

The Met Office says: “Icy patches may cause some travel disruption this morning.”

They also suggest people can “expect” injuries from slips and falls and some untreated patches of ice on roads, pavements and cycle paths.

The announcement comes just hours after the Met Office tweeted: “Icy patches are forming over parts of northern, western and central Scotland this morning, take care on the roads”

She said: “Take extra care on the roads and perhaps drive with extra caution in the morning.”

Ms Mitchell explained ice across the region comes after showers were met with low temperatures in the early hours of this morning.

The same areas could witness hail later today as wintry conditions continue to affect areas around the Irish Sea.