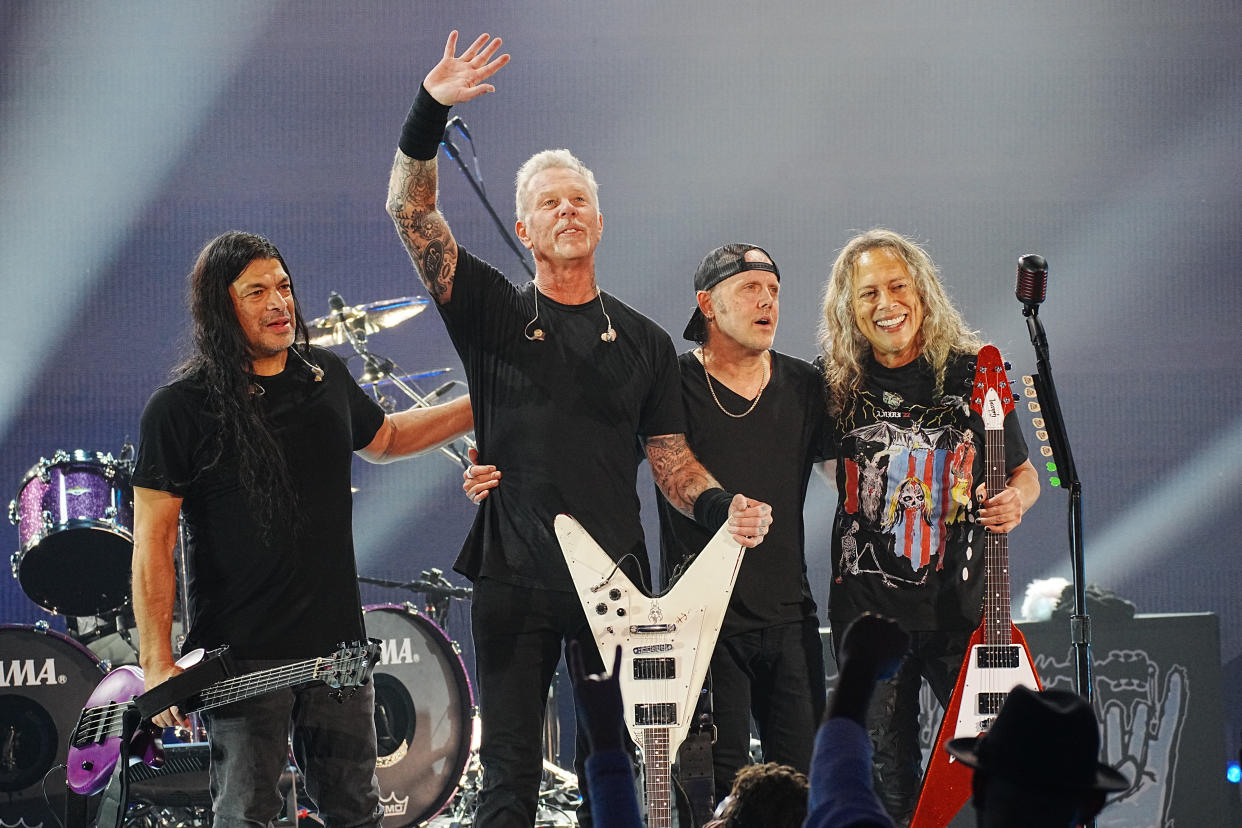 Metallica just lost their long-running legal battle against Lloyd’s of London, with a California judge absolving the insurance market company of any financial losses stemming from the band’s forced postponement of six 2020 South American shows due to the COVID-19 pandemic. But just one day after this disappointing ruling was announced, Metallica were in good spirits, back onstage and giving back, at Los Angeles’s intimate Microsoft Theater, for their third Helping Hands Concert & Auction fundraising event.

Frontman James Hetfield expressed his joy over being able to play again for Metallica’s diehard fans, saying, “We’ve been together forever, for 200 years. We’re so grateful to be doing what we’re doing.”

Hetfield and company even treated Friday’s audience to the live debut of a thrashy new track from Metallica’s COVID-delayed 72 Seasons album, which is finally coming out in April 2023. “We thought that this is such a special gig here, that we’d play ‘Lux Æterna,’ which is the first single from [72 Seasons]. We’ll play that for the first time here live. How about that?” Hetfield rhetorically asked. A cymbal snafu caused the band to stop and restart the song, but the 7,100 elated concertgoers in attendance — among them Rage Against the Machine's Tom Morello and Guns N' Roses drummer Matt Sorum — hardly seemed to mind or even notice.

While “Lux Æterna” was the night’s only preview from 72 Seasons, the event, which benefited the band’s All Within My Hands foundation, did feature some other surprises. Metallica played their first-ever covers of Thin Lizzy’s “Borderline” (“Phil Lynott was writing that song about my life,” Hetfield quipped) and the UFO deep cut “It’s Killing Me,” the latter being drummer Lars Ulrich’s request. “We keep playing covers because it’s fun,” Hetfield chuckled.

Then “new friend” St. Vincent — who actually covered Metallica's “Sad But True” on last year’s all-star covers compilation, The Metallica Blacklist — strutted out to jam on another Black Album power ballad, “Nothing Else Matters.” During the half-acoustic/half-electric concert, San Francisco folk singer/multi-instrumentalist and former AWMH intern Avi Vinocur also joined in, playing mandolin and acoustic, electric, and 12-string guitars. (“All the stuff we don’t know how to do,” Hetfield remarked.)

Jimmy Kimmel hosted Friday’s fundraiser, declaring Metallica “one of the best bands in the history of the world” to roaring applause, while Robert Downey Jr. and Tony Hawk also made surprise appearances to sing the band’s praises and express their own fandom. Rising hard-rockers Greta Van Fleet opened the show.

Since Metallica established All Within My Hands in 2017, the charity initiative has raised $12 million to combat food insecurity, provide natural disaster relief, and build sustainable communities through workforce and community college programs. This year’s AWMH memorabilia auction, which kicked off Dec. 5, runs through Dec. 20; 100% of the proceeds from both the auction and benefit show will go directly to people in need. Friday’s concert was live-streamed via Paramount+, and will be available to watch again in full on Monday, Dec. 19. 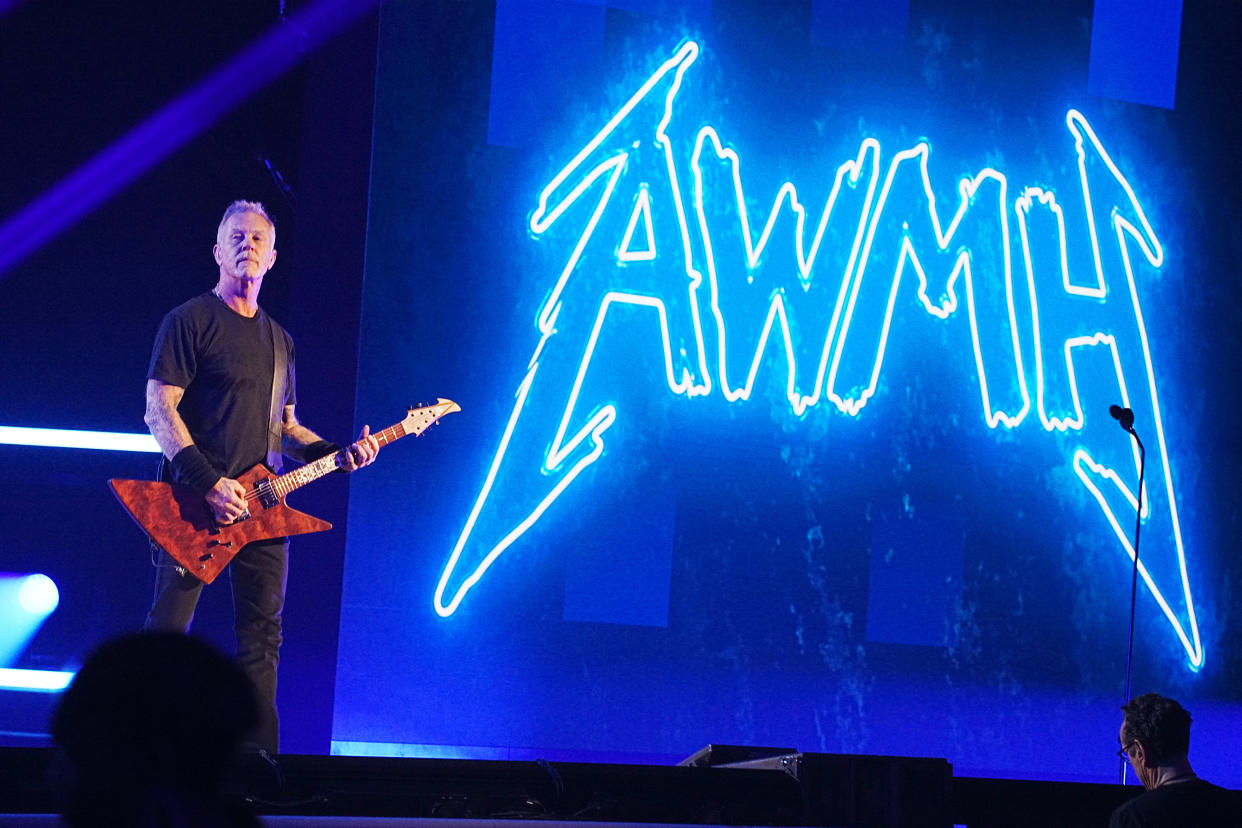 As for what comes next for Metallica, post-lawsuit and post-pandemic, on April 27, 2023 — two weeks after the hotly anticipated release of 72 Seasons, the band’s first studio album since 2016 — they’ll be back to playing stadiums on their two-year M72 World Tour. They will perform two gigs in every city, with completely difference setlists for each night. The full setlist for their Dec. 16 Helping Hands concert is below.

Whiskey in the Jar

Intermission (introduced by Hetfield with: “We’re going to be right back, take a short intermission, and then come back and kick some metal ass”)

The Call of Ktulu

All Within My Hands

Nothing Else Matters (with St. Vincent)

EU leaders may meet on Friday if no Brexit extension consensus: Irish PM