Fury as Mexican couple has a Nazi-themed wedding complete with SS uniforms, swastikas and a CHILD named after Reinhard Heydrich on the anniversary of Adolf Hitler’s wedding

Fernando and Josefina tied the knot at a church in the state of Tlaxcala – east of Mexico’s capital – on April 29, the anniversary of Hitler’s marriage to Eva Braun.

The German dictator committed suicide a day later in 1945.

Fernando and his three groomsmen wore replica suits of the Schutzstaffel, a paramilitary unit that served the Nazis – while Josefina wore a white gown.

‘If we had not found a mass for today, we would have gotten married next year,’ the groom told Mexican news outlet Milenio. 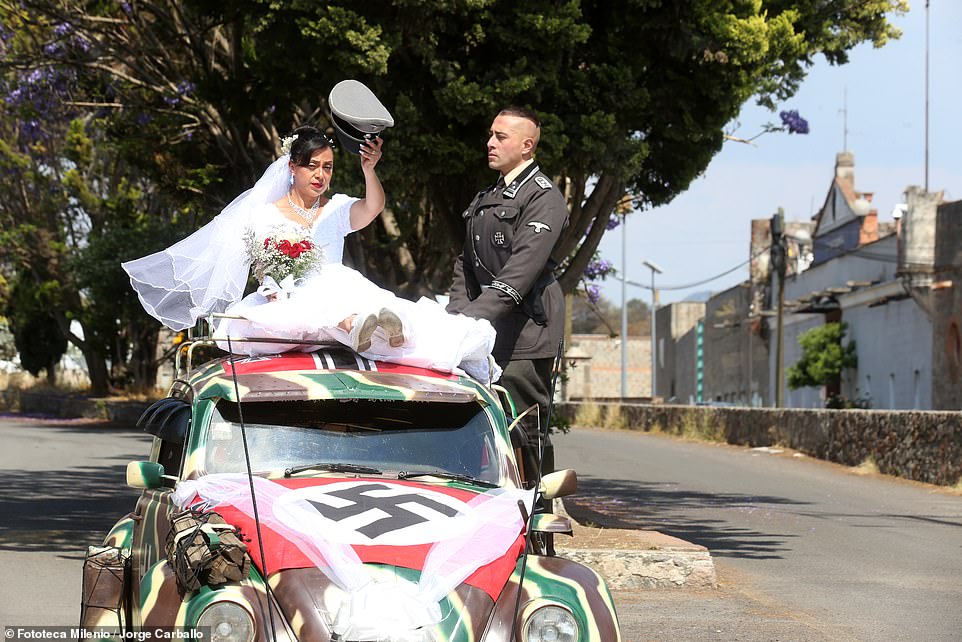 Josefina (left) and Fernando (right) have drawn the ire of the Jewish community after they celebrate a Nazi-theme wedding in Tlaxcala, Mexico, on April 29, the anniversary of German dictator Adolf Hitler’s wedding anniversary 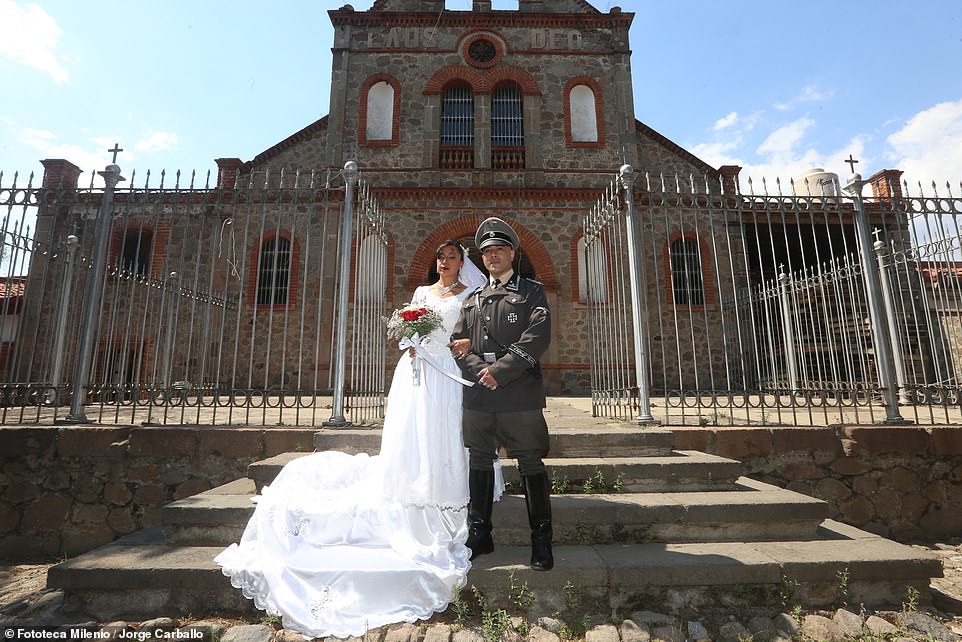 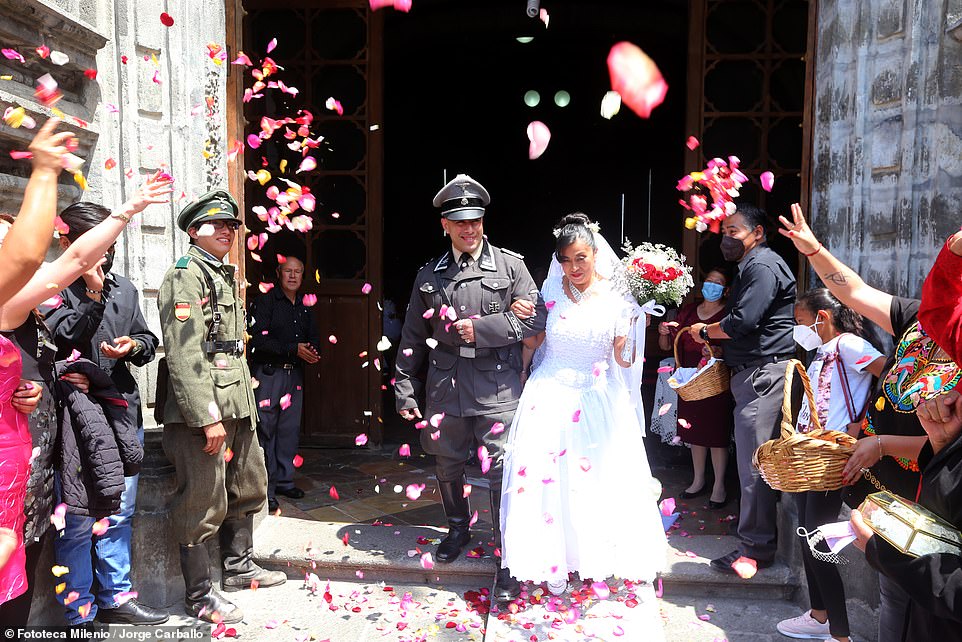 Fernando (left) and Josefina (right) exit a local church in the Mexico state of Tlaxcala – located east of Mexico City, the capital – following their wedding April 29. They tied the knot for the second since 2016, when they did in a civil ceremony. That wedding was also held on the same date, which marked the anniversary of Adolf Hitler’s own wedding

The themed wedding was condemned by Simon Wiesenthal Center in a statement.

‘Our institution strongly condemns the distortion and trivialization of the memory of six million Jews murdered in the Holocaust and contempt by those who deny or obfuscate history, as also all those who took part of this Nazi wedding or authorized it,’ said Dr. Ariel Gelblung, director for the center’s Latin America branch.

‘Mexico must adopt the International Holocaust Remembrance Alliance (IHRA) Definition of Antisemitism and incorporate it into its legislation to prevent such hateful behavior.’

Mexico’s National Council to Prevent Discrimination (CONAPRED) slammed the couple for their poor taste, indicating ‘it is necessary to remember the terrible events that took place on European soil during the Holocaust, a crime without parallel in the history of humanity.’

It is the second time the couple exchanged vows, doing so in a civil ceremony on the same date in 2016.

They were met with death threats at the time after a person who attended the wedding party took to social media to share a photo of their cake, which featured a swastika. 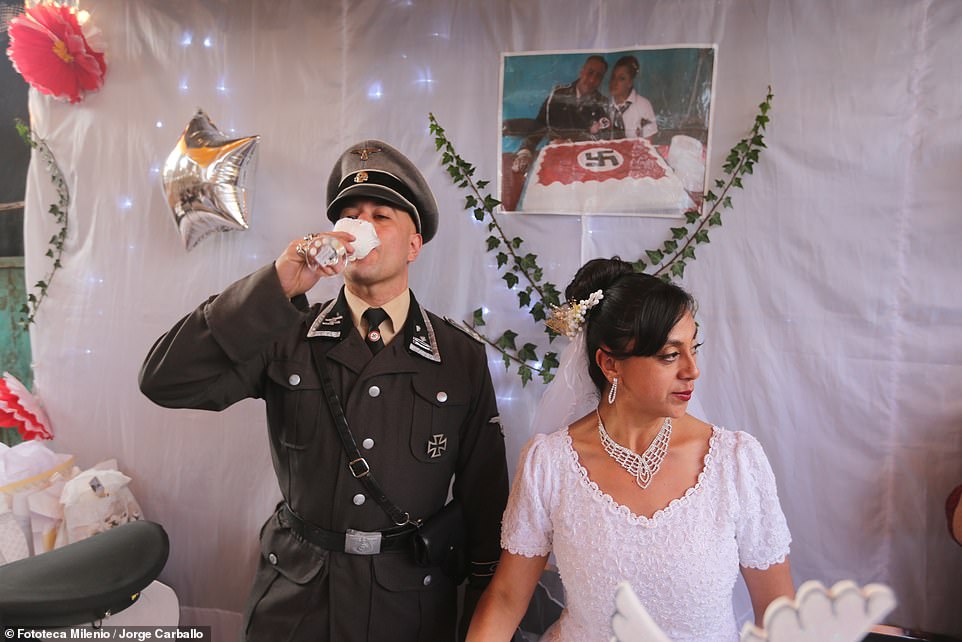 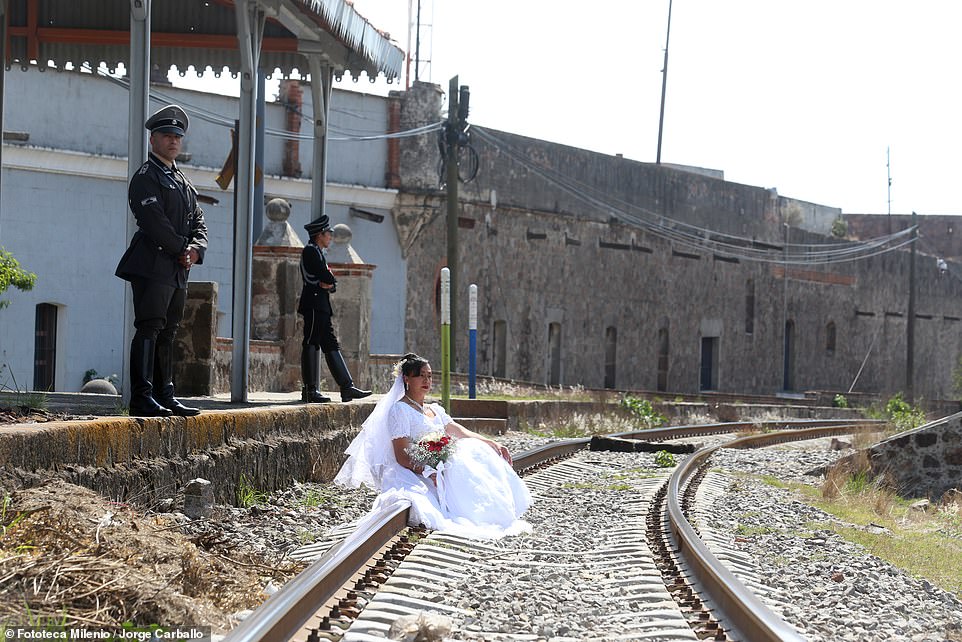 Fernando, who works in government, and Josefina are parents to two children, Reinhard, named after the Reinhard Heydrich, the Schutzstaffel general, and Hanna Gertrud, in honor of Nazi pilot Hanna Reitsch, who reportedly rescued Hitler from a bunker and Gertrud Scholtz-Klink, who led the National Socialist Women’s League.

They baptized their two children at the same church where they got married last week and revealed they did not get any backlash when Fernando showed up at the religious ceremony that officiated by the same priest who married them.

Although Josefina was not aware of the Nazi party and Hitler, she learned about though Fernando.

‘I support him because I have a responsible husband,’ she said. 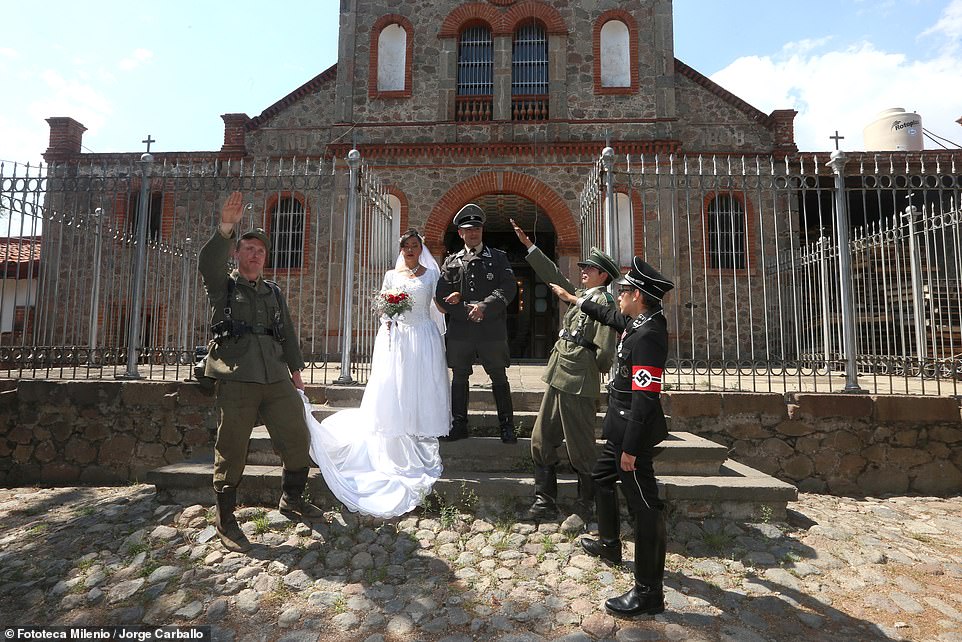 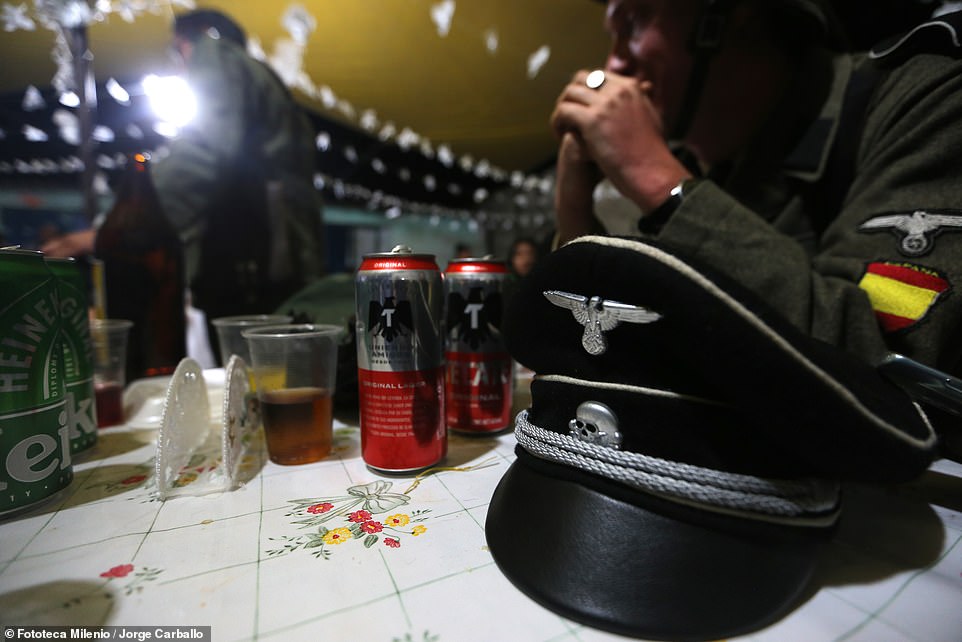 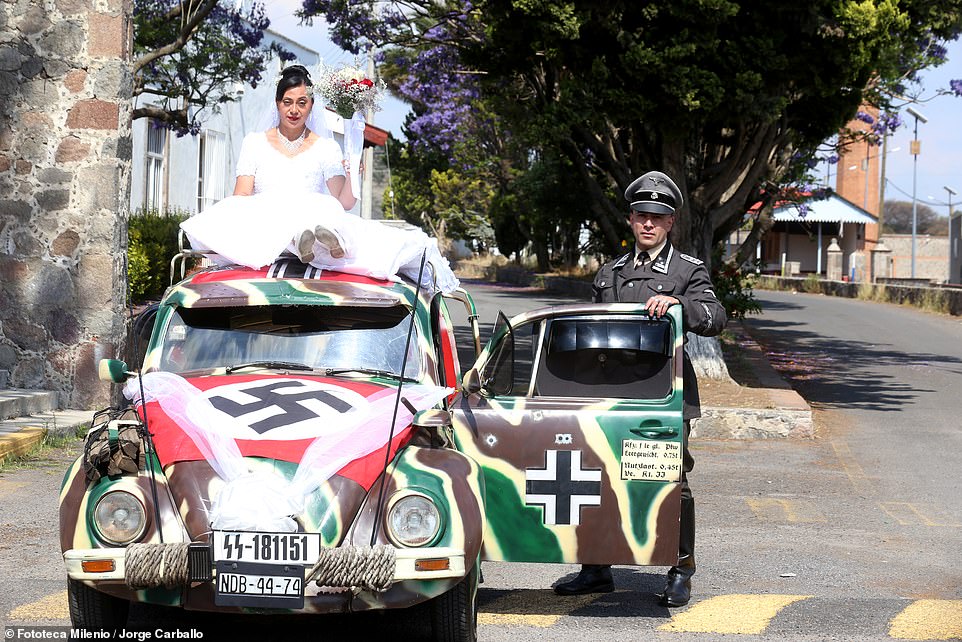 The Simon Wiesenthal Center slammed the Nazi-style wedding held by Josefina (left) and Fernando (right), saying ‘our institution strongly condemns the distortion and trivialization of the memory of six million Jews murdered in the Holocaust and contempt by those who deny or obfuscate history, as also all those who took part of this Nazi wedding or authorized it’

The 38-year-old Fernando was steadfast is explaining his admiration for Hitler in an interview with Milenio after he exchanged vows with his wife.

‘I know that for many people, Hitler is genocidal, a symbol of racism and violence,’ he said. ‘But people judge without having information or by believing in the history of the victors.’

He said that the Nazi dictator ‘was a vegetarian’ and did right by his country by returning land that the country lost in World War One.

‘His people loved him,’ Fernando said. ‘We’ve been led to believe that Hitler was a racist, but he came up to greet Jesse Owens at the 1936 Olympics.’ 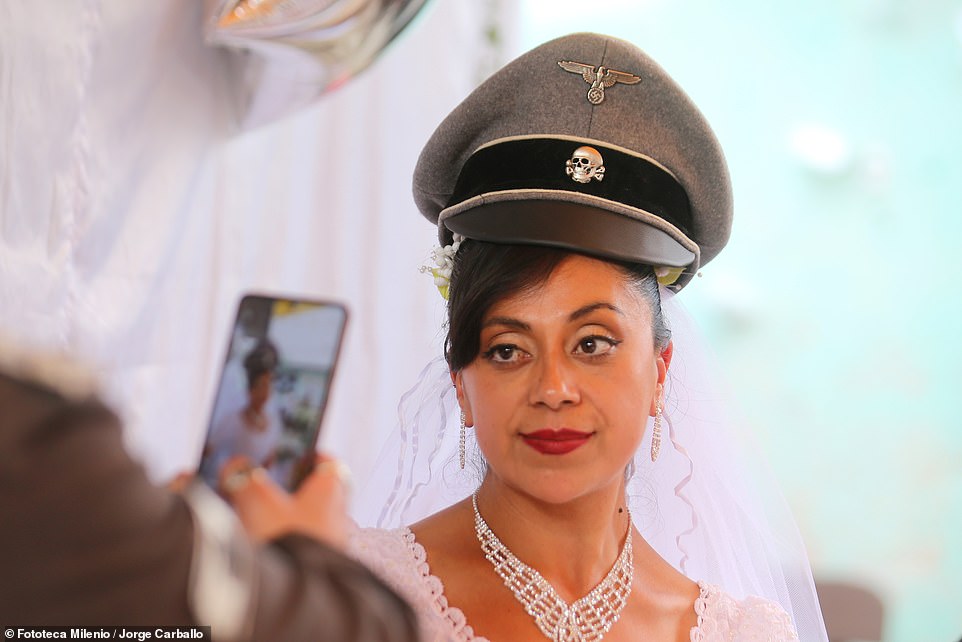 Josefina claimed she did not know too much of the Nazi party and Hitler, indicated she learned about though Fernando and supports her spouse’s admiration of the dictator ‘because I have a responsible husband’ 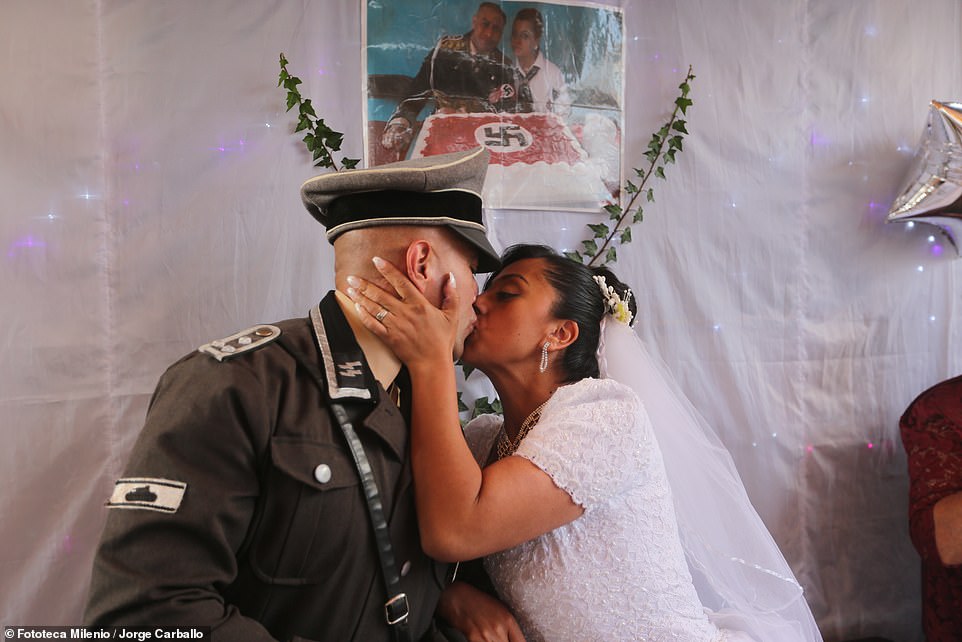 Fernando said he has been a supporter of the national socialism movement since he was 16 years old, following in the steps of his father and uncles 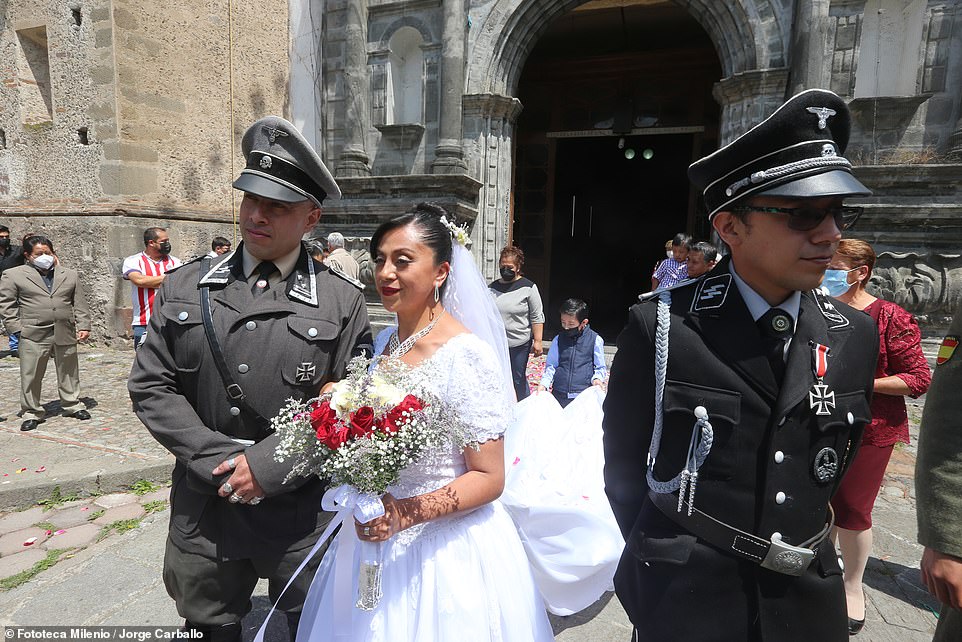 When confronted with the fact that the Nazi’s set up thousands of concentration camps, he countered that the ‘United States and Russia had their own extermination camps, but we only know about the Germans because they lost the war and history, as I told you, is written and invented by the winners.’

Fernando revealed he has been a follower of the national socialism movement since he was 16 years old, following in the steps of his father and uncles.

He recalled how people hurled spit on him and physically assaulted him. Someone once crashed their vehicle into his Volkswagen Beetle.

‘The worst was the time they pointed a gun at me and called me a Nazi,’ he said. ‘But the beautiful thing about loving an ideal is dying for it.’

Special Report: Hong Kong leader says she would 'quit' if she could, fears her ability to resolve crisis now 'very limited'