Bologna: A 3D-printed replica of Michelangelo’s David at the Dubai Expo has been mired in controversy after organisers blocked views of his buttocks and manhood to respect Muslim culture.

According to the Italian daily La Repubblica, Expo staff agonised over how they could display the 17-foot-tall replica of the Renaissance masterpiece without offending conservative Muslims. They eventually decided to place the statue within an octagonal glass gallery spanning two floors, one level with the warrior’s muscular legs and another with his eyes. 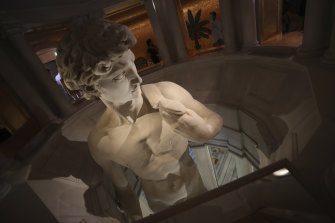 The carefully constructed display for a 3D re-production of Michelangelo’s David at Italy’s pavilion of the Dubai Expo. Credit:AP

A large stone slab placed between the two floors means no visitor faces the embarrassment of staring directly at the statue’s penis, while wide ledges on the top floor – open to public visitors – make it impossible to lean over and peer downwards.

The nude pubic area can only be seen by standing close to the glass and looking upwards from the lower floor, which is only open to authorities and functionaries, according to Italian media reports. Public nudity is outlawed in the United Arab Emirates.

The country hopes that the six-month Expo event will boost investment and help its tourism industry recover from the COVID pandemic.

“We even thought of putting undergarments on the statue, or changing it altogether, but it was too late,” a source who worked on the project told La Repubblica. “We understood too late that it was an error to bring a statue of a nude man to the Emirates.” 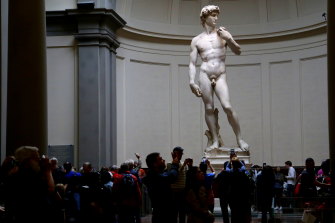 The original Renaissance masterpiece on display at the Accademia Gallery in Florence.Credit:AP

Originally sculpted by Michelangelo in 1504, the work depicts David tense and ready for battle after deciding to fight Goliath.

It was initially installed in Florence’s Piazza della Signoria and became a symbol for the Florentine Republic. In 1873, the statue was moved to the Florence Academy of Fine Arts to protect it from wind and rain.

It remains one of the most popular tourist attractions in Florence, where tacky aprons, postcards and trinkets featuring David’s exposed genitalia are sold on nearly every corner. A detachable plaster fig leaf was made for a copy in the Victoria and Albert Museum in London, reportedly to spare Queen Victoria’s blushes when she saw it.

Vittorio Sgarbi, outspoken Italian art critic, called the Italian pavilion’s decision “grotesque and ridiculous”. “This is a biblical theme, not a pagan theme, so cancelling a part of Michelangelo’s David at the Italian pavilion of the Dubai Expo is just bowing to their religion and culture,” Sgarbi told Adnkronos wire agency.

Davide Rampello, pavilion art director, released a statement on Saturday denying any government censorship and defending the display. He said it was a unique conceptual approach in which the David sculpture greets visitors with his gaze directly at eye level.

“It is a different perspective, which is new, introspective and moving,” Rampello said.

The exact replica of the Michelangelo’s David was produced from laser scans of the sculpture, then churned out of the world’s largest 3D printers. It was meant to represent Italy’s manufacturing expertise at the fair.

While Expo pavilion organisers dismiss the criticism as a storm in a teacup, critics say the decision to cover up the David is part of a broader clash between Western and Middle Eastern culture.

Coronavirus: Cancelled or suspended events in the Okanagan due to COVID-19 concerns