The head of the RMT rail union has claimed he wants a deal to end the long-running dispute over pay and conditions – despite inflicting more misery on passengers and businesses with a fresh wave of strikes starting today.

Mick Lynch has insisted he does not want disruption on the railways, ahead of two 48-hour walkouts by his members that will mean only one in five trains run.

By preventing millions of commuters returning to work, the shutdown effectively extends the festive period for another week, leaving high street shops and cafes empty. 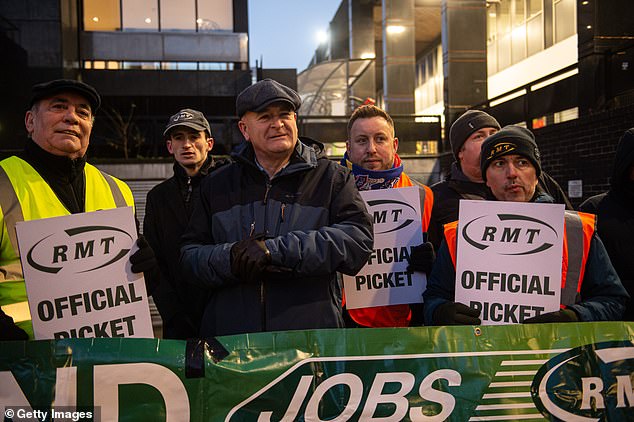 Mick Lynch has insisted he does not want disruption on the railways, ahead of two 48-hour walkouts by his members that will mean only one in five trains run. 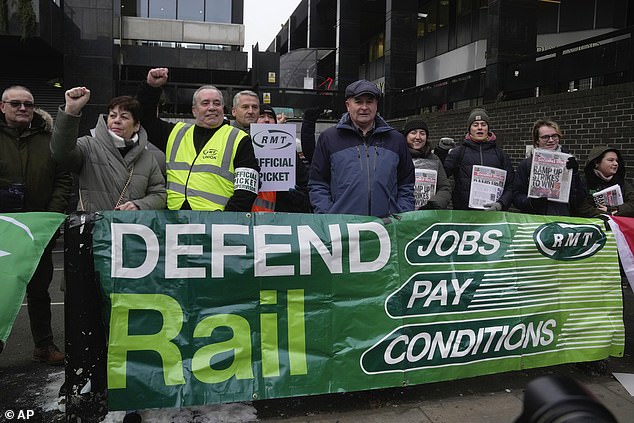 Mr Lynch blamed ministers for blocking a possible agreement between employers and his trade union, which has turned down a pay rise offer of 9 per cent over two years 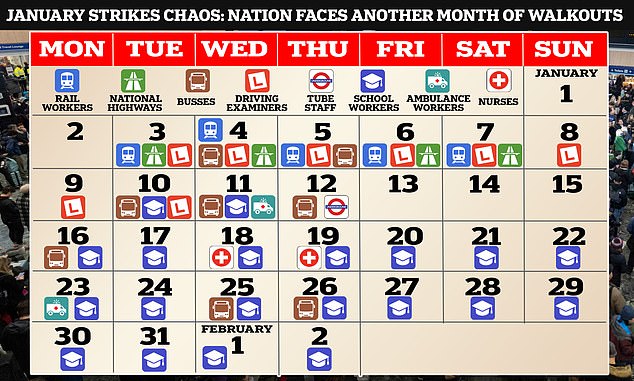 A union chief has insisted walkouts will continue despite Rishi Sunak’s plan to rush through new anti-strike laws this year.

Dave Penman, general secretary of the FDA which represents senior civil servants, also predicted there will soon be co-ordinated industrial action across the public sector.

Mr Penman told Times Radio: ‘The reality of this is these disputes are about pay.

‘And unless you do deal with that, unless the Government tries to solve that, they might be able to have some minor restrictions around the impact of some of these strikes, but the strikes are going to continue.’

Mr Lynch blamed ministers for blocking a possible agreement between employers and his trade union, which has turned down a pay rise offer of 9 per cent over two years from Network Rail that also includes a guarantee of no compulsory redundancies for two years.

Asked yesterday by the BBC if there was still the possibility of a deal, the RMT general secretary replied: ‘I hope we can all work towards a deal but we haven’t heard from anyone formally since mid-December.’

He claimed the Government ‘simply will not have a mandate to the employers’ to resolve the dispute, adding: ‘They’ve put a block on the deal and they’re an obstacle rather than a facilitator which is unfortunate.’

Told that he may lose the battle eventually because the strikes have not brought the country to a standstill, Mr Lynch replied: ‘We don’t want disruption. We want a settlement. There’s been too much disruption on the railway caused by Government policy and if we can get sensible proposals we can work up towards a solution.’

The RMT claims that ministers are blocking track owner Network Rail and the Rail Delivery Group, which represents train operating companies, from coming up with a new offer.

The union says no formal talks have been arranged in recent weeks, and that it has managed to secure deals in Scotland, Wales and other areas where the Department for Transport is not involved.