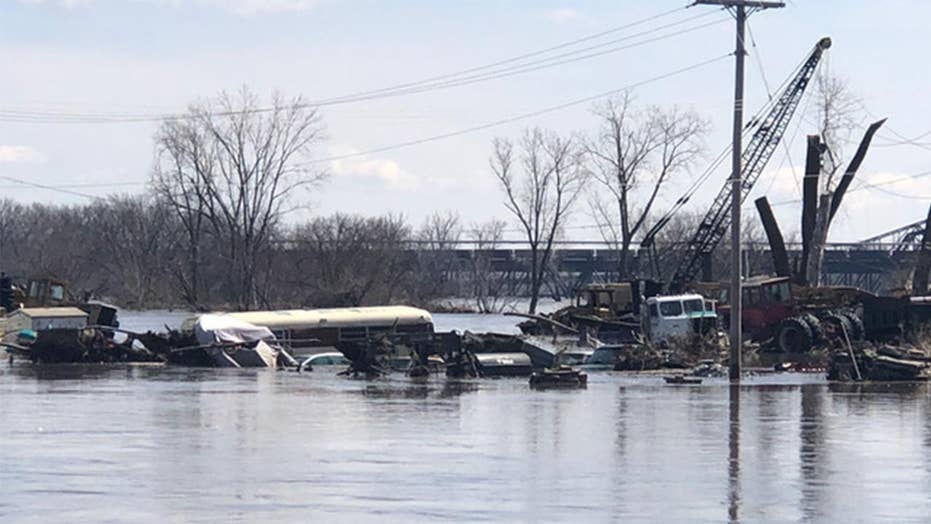 PLATTSMOUTH, Neb. – Parts of the Midwest have been inundated with flooding as rainfall and melting snow force rivers to swell in parts of Iowa, Missouri, Kansas and Nebraska.

In Plattsmouth, Neb., the Missouri River reached record heights – up to 40 feet – submerging many homes and businesses. By Monday, a portion of one of the town’s major throughways, Main Street, was submerged in water that had overflowed from the river. Signs warning of flooded roads were the only things signaling onlookers that a roadway was below the water.

Among the people who had come out to get a glimpse of the damage was Gary Young, who had been trying to assess any damage to his camper that was floating about a mile away. He, his wife and their dog had been living there with no problems all winter until the flooding began over the weekend and forced them to evacuate.

“We thought we had another day or so to get our stuff out,” Young said. "[We] went to bed that night, got up at 5 a.m. and my wife said that the water was already going over the road. We made the decision to grab what we could, get the vehicles and get the vehicles out.” 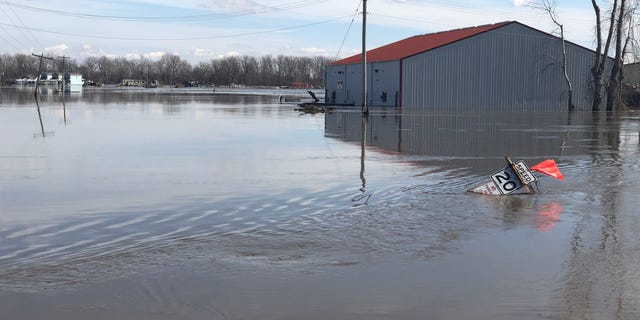 A road sign and building sitting in water left behind after the Missouri River rose to record heights, flooding a huge swath of land in the city Plattsmouth, Nebraska. (Fox News)

Young and his wife figured, with water already starting to cover the roadway, they probably wouldn’t be allowed back into their home. They decided it was best to grab their dog and head for safety.

“It’s tough, but in the long run I’m safe, my wife is safe, and we got our dog out,” he said as he reflected. “That’s what’s most important.”

Young and his wife are staying at a hotel in Council Bluffs, Iowa, which is about an hour's drive from Plattsmouth with all the road closures. He said they would probably go stay with family in Glenwood, Iowa, southeast of Council Bluffs, but with more flooding expected over the next couple of days that city may have to terminate its water supply.

“It’s kind of up in the air right now where we may end up.”

The City of Plattsmouth declared a water emergency. Officials urged residents to conserve water, saying the city's water treatment plant has been flooded.

“To protect the plant from further damage, the plant will be shut as soon as is safely possible,” the city’s website read.

Ron Ballinger, who's lived in the city his entire life, said he’s seen a lot of floods but never anything of the magnitude of what had overtaken parts of Plattsmouth.

“It’s devasting. Thousands of people lost their homes,” Ballinger said as he stared out at all the damage caused by the flooding. “My niece alone lost three houses and her cabin.”

He said she was able to escape the flooding with most of her belongings. However, Ballinger said not everyone has been as fortunate as his niece.

“When you look up north, all through there, all these little towns are devasted. All the houses lost. Where are we going to put them? People need to help them out because they have nowhere to go now.”

As Young tries to figure out what he and his wife will do next, there was a bit of a bright spot amid the fog of devastation.

Greek conservatives have 10- to 15.5-point lead over Syriza in snap vote: polls