These are just some of the stunning models who are said to have flown into Brazil for football star Neymar’s week-long New Year’s Eve party dubbed ‘Neymarpalooza’.

Up to 150 people are said to have made it to the massive event which has been internationally criticised for taking place during the coronavirus pandemic and provoked fury from locals who say it puts them at greater risk from the virus.

The women, who arrived in Brazil from the likes of Miami and Barcelona, allegedly joined the 28-year-old at a rented mansion in the municipality of Mangaratiba on south-eastern Brazil’s Costa Verde last week.

Models Kiki Passo, Michelle Nevius and Jessica Bartlett flew in directly from Miami, invited by Neymar and his pals in an Instagram message. 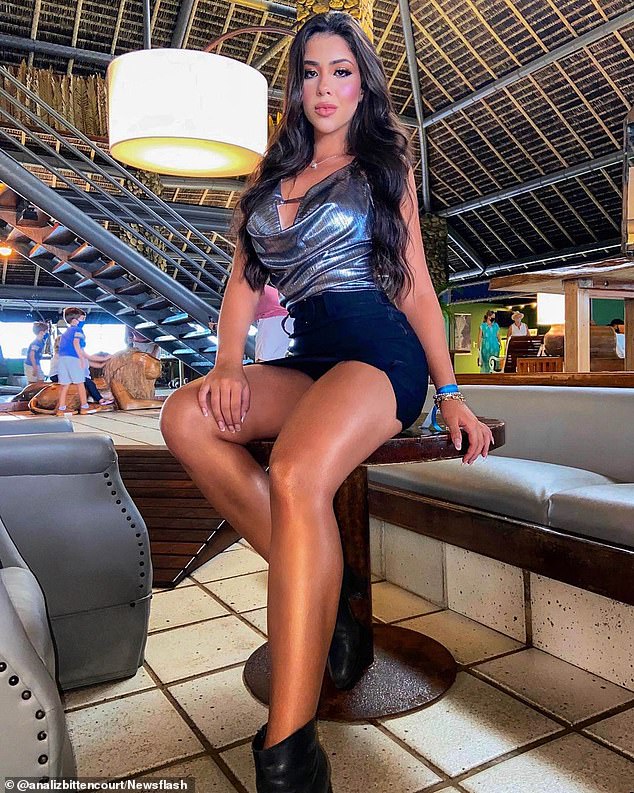 Are these models headed for Neymar’s party? Ana Liz Bittencourt posed for photos at a luxury resort just a five minute’s drive from the rented mansion where the footballer is said to be hosting his event 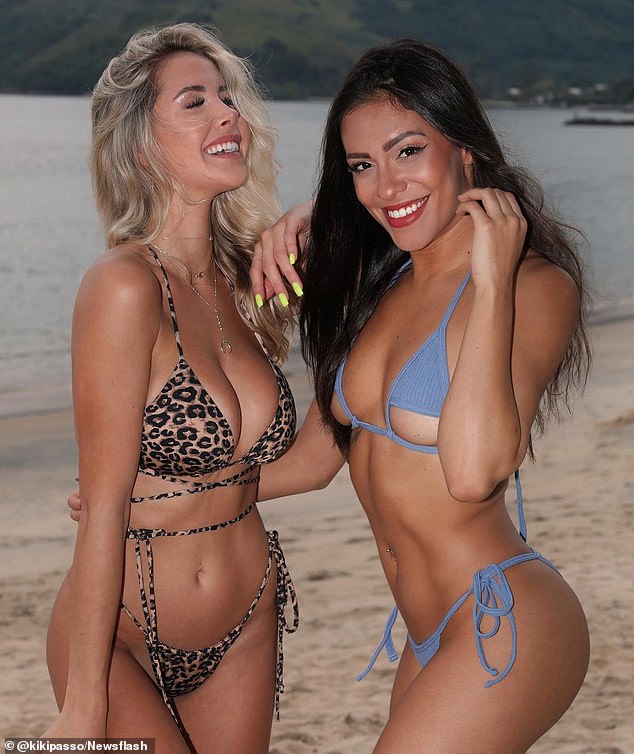 Models Kiki Passo, Michelle Nevius (pictured) and Jessica Bartlett flew in directly from Miami, invited by Neymar and his pals in an Instagram message. They were seen taking photos at the same hotel 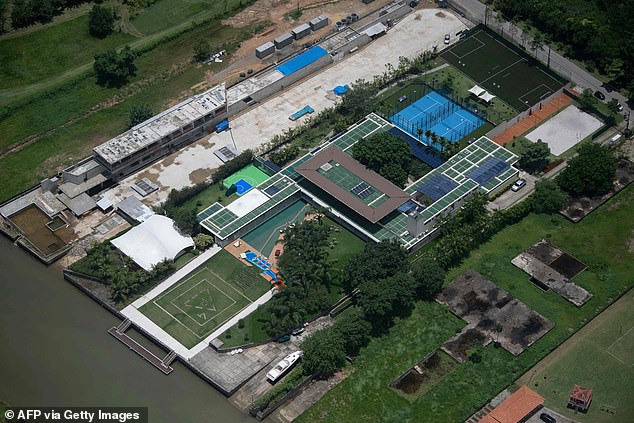 Neymar is said to have rented this huge riverside mansion in the municipality of Mangaratiba, 70 miles along the coast from Rio de Janeiro. It is believed up to 150 people are attending the event over a number of days 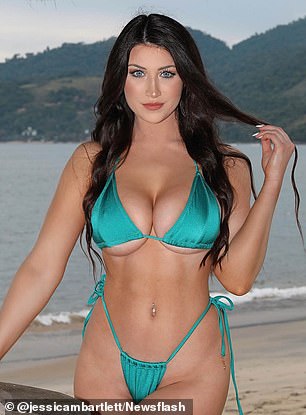 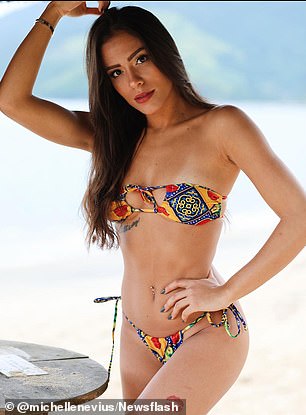 The models have shared photos posing on the beach at Portobello Resort e Safári, a luxury hotel five minutes away from the mansion the forward is said to be renting. Left: Jessica Bartlett, right: Michelle Nevius

They have shared photos posing on the beach at Portobello Resort e Safári, a luxury hotel five minutes away from the mansion the forward is said to be renting.

Photos posted on social media by influencer Ana Liz Bittencourt from the same hotel show the wristband that guarantees access to the five-day party, which has been estimated to have cost the football star around £568,000.

Brazilian models Camila Remedy and Fernanda Brum were also alleged to be among those in town for the star-studded bash, arriving by private jet from the southern city of Porto Alegre.

‘Let’s go by jet to end the year with glamour,’ they posted on Instagram. 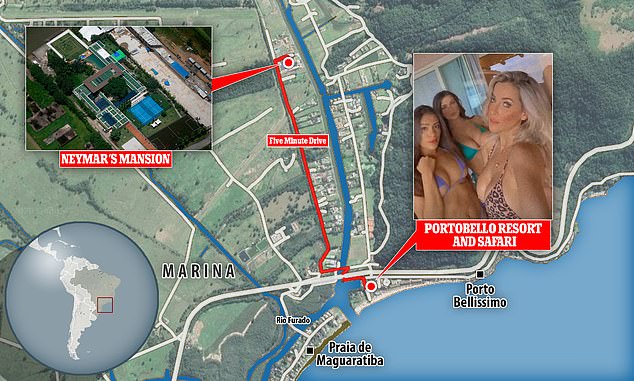 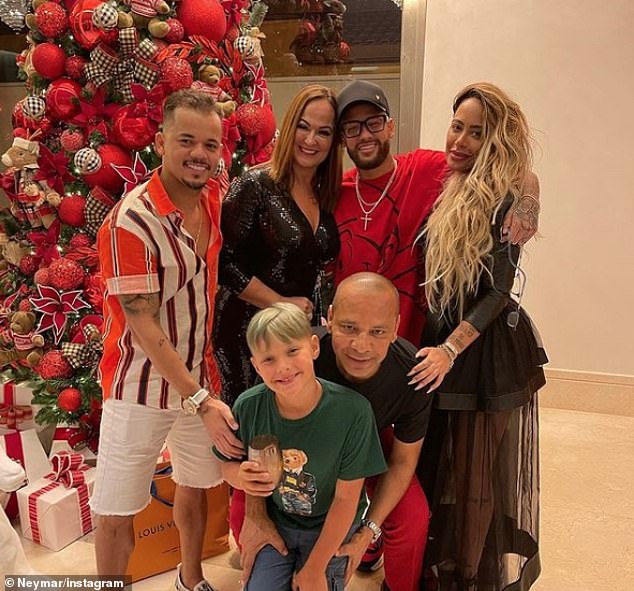 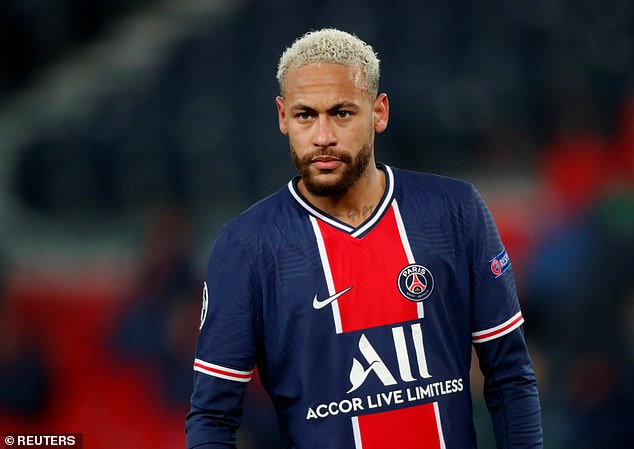 The Paris Saint-Germain star has denied that the 500-person party is even taking place. He has faced huge criticism for the event, although it is not believed to be illegal in Brazil

The footballer has avoided posting about the party on Instagram where he boasts 144 million followers.

Neymar has also denied flouting Covid-19 rules to host the party, which at its peak is said to have involved 150 people.

But eyewitnesses have claimed to see scores of guests arriving and leaving, with their host reportedly banning mobile phones to keep the bash secret and also sound-proofing an annexe of the mansion to prevent neighbours hearing the noise.

CNN Brasil reported that Neymar’s representatives denied the party is taking place at all but the City of Mangaratiba has criticised him for ‘hurting sanitary principles’. 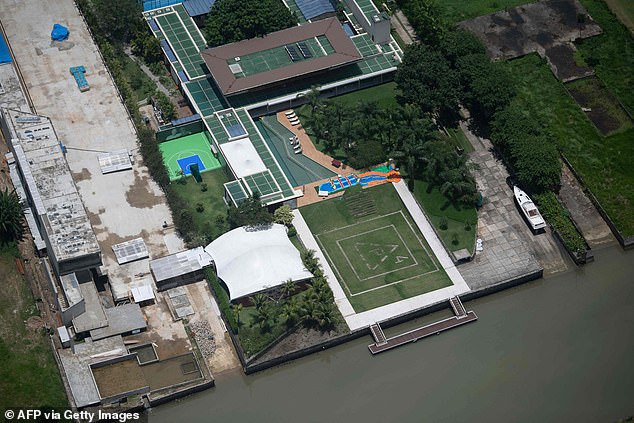 This is the sprawling riverside mansion said to be hosting the event, which has been estimated to have cost the football star around £570,000 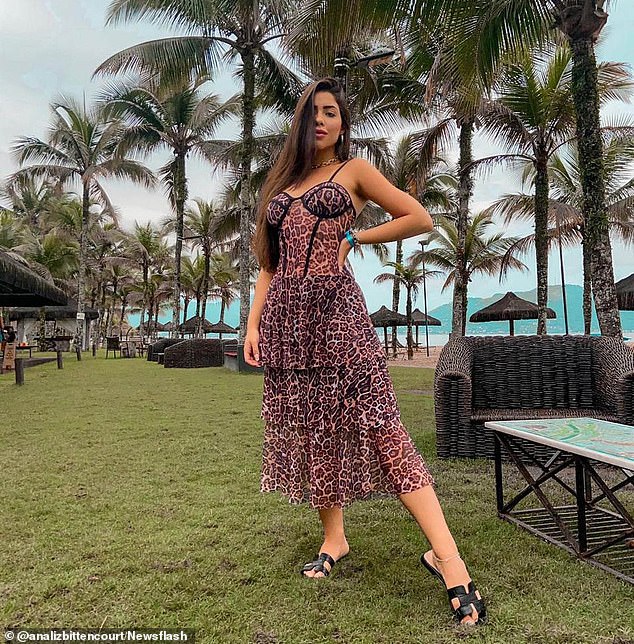 Ana Liz Bittencourt is alleged to be at Neymar’s party, posing here at a nearby resort while wearing the party’s VIP bracelet. ‘For cloudy days .. nothing like an animal print,’ she said in the post on Instagram 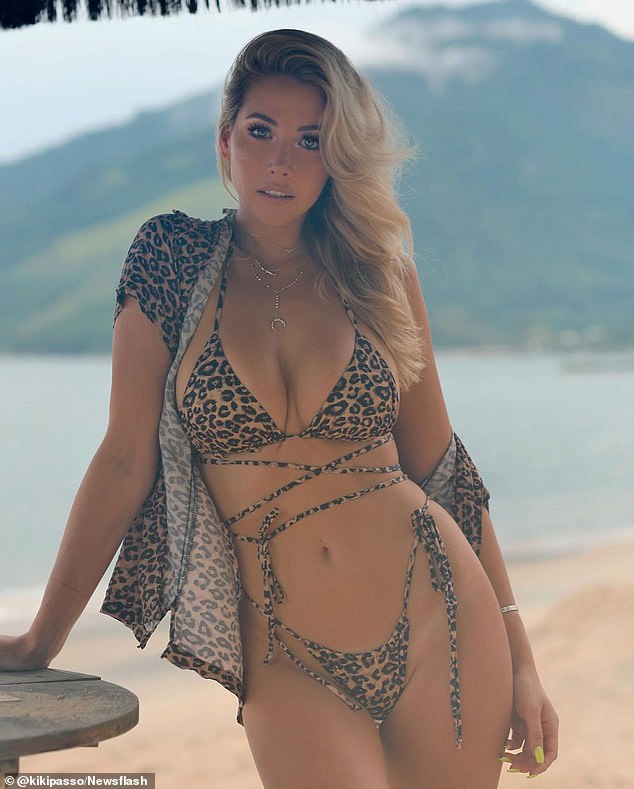 The coronavirus death toll in Brazil recently surpassed 190,000, behind only the United States in the global tally. The number of confirmed Covid-19 cases stands at 7.5million, more than any other country except the USA and India.

In a statement, the local authority said it was ‘not officially notified of the party and that an event for 500 people should, at least, have been notified to the municipality.’

A source from the local government told CNN: ‘There is no way to legislate at a particular event but if Neymar has a party here (Mangaratiba), he is seriously hurting sanitary principles, the decrees in force and the recommendations of city hall to only hold small family parties.

‘The population is dissatisfied with the party and the repercussions involving the name of the city. The event is a sanitary disrespect and totally absurd.’ 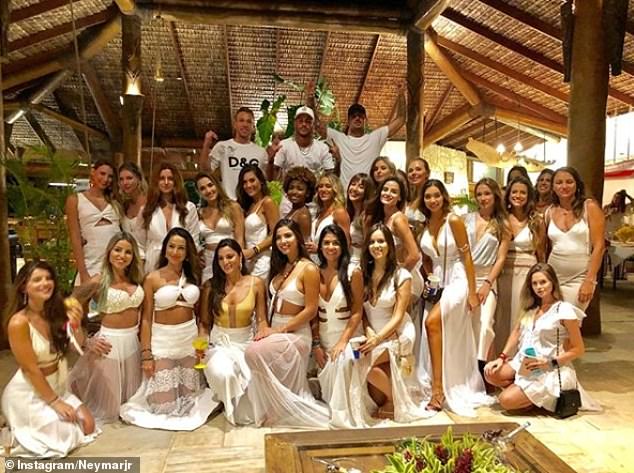 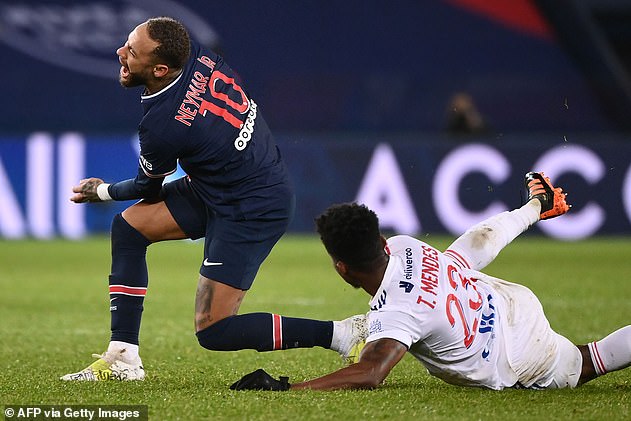 CNN said local hotels had reported a spike in bookings from guests attending the party.

Those invited to the bash reportedly include his sister Rafaella Santos and Brazilian influencer Camila Loures.

Neymar’s last Instagram post two days ago showed him with his family, including his son Davi Luca, nine, and his divorced parents in front of a Christmas tree surrounded with presents.

The PSG star was feared to have broken his ankle after being taken off on a stretcher during a Ligue 1 match clash with Lyon earlier this month.

Subsequent medical examinations were said to have been ‘reassuring’, although the 28-year-old was ruled out for the rest of 2020.

Neymar’s lavish parties have made headlines in the past. 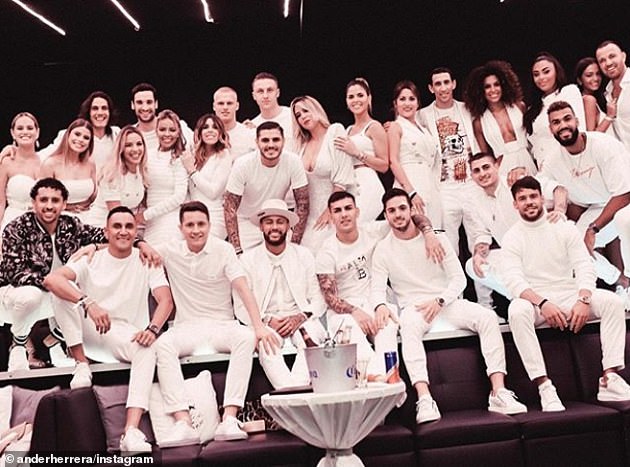 Neymar (front, centre) hosted his PSG team-mates and their WAGs at his 28th birthday party 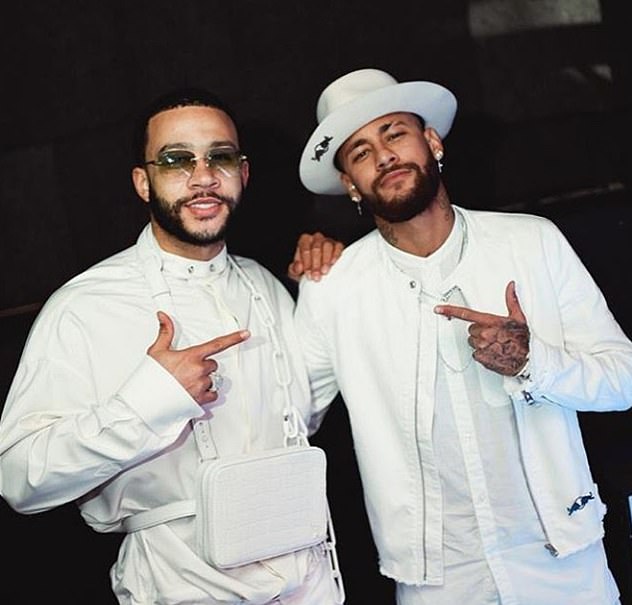 Former Manchester United player Ander Herrera revealed earlier this year how the Brazilian split team-mates into two groups on different floors of a Paris nightclub for his 28th birthday bash in February.

Married players partied on the top floor while those who were single were set up on the bottom floor so they could ‘have a good time’.

Asked what happened at the party on Spanish TV show The Resistance, Herrera responded: ‘What didn’t happen!’

Neymar turned up for the bash at YOYO close to the Eiffel Tower looking dapper in a white hat. 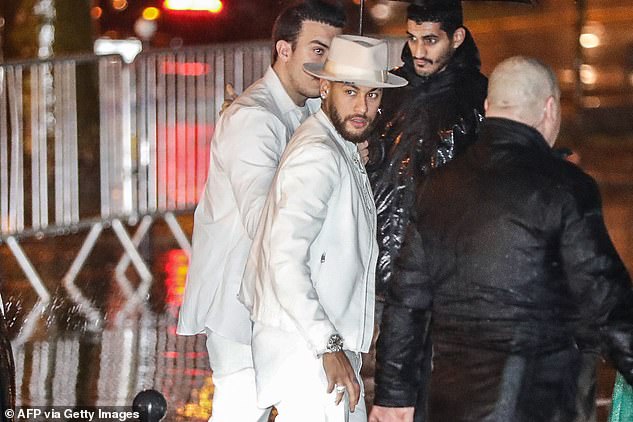 Mangaratiba is one of three municipalities on the Green Coast, a chain of mountains covered by the rich Atlantic rainforest.

In front of the mountains lies the sea of the Angra dos Reis Bay.