New Delhi: Tension built for 10 days in a Himalayan valley that is as scenic as it is turbulent.

In rugged Kashmir, India sent in thousands more troops without an official explanation. Authorities cancelled a famed Hindu pilgrimage. Police trolled lakes and guesthouses to evacuate tourists. Schools were closed, phone and internet connections shut down and residents sheltered in their homes. 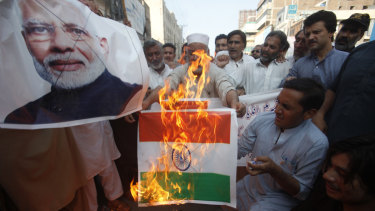 Pakistanis burn a representation of an Indian flag and a poster of Indian Prime Minster Narendra Modi in protest over the Kashmir decree.Credit:AP

Then, on Monday, with most Kashmiris unable to follow the news, the Indian government announced a historic constitutional change, revoking the limited autonomy held for decades by its only Muslim-majority territory.

It also appears certain to heighten tensions with rival Pakistan – which also claims Kashmir – and trigger a violent backlash among separatist insurgents and civilians bitterly opposed to Indian rule. 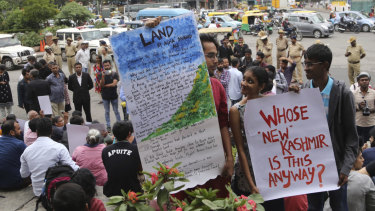 Modi's top lieutenant, Home Minister Amit Shah, announced the presidential decree in Parliament, drawing angry outbursts from opposition members who argued the move violated the constitution and denied Kashmiris the right to self-determination promised to them for more than 70 years. 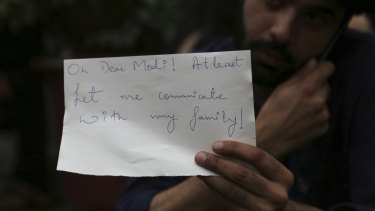 A Kashmiri, who works in Bangalore, holds a piece of paper addressing Indian Prime Minister Narendra Modi during a protest in Bangalore.Credit:AP

The unusual move fuelled speculation that the government was about to announce a decision on the state's special status. Many of Kashmir's residents stocked up on supplies and medicines.

On midnight on Monday, the communications lockdown went into effect and local authorities passed orders restricting people's movement. Two former chief ministers of the state – Mufti and Omar Abdullah – as well as politician Sajjad Lone were placed under house arrest.

Tariq Ahmad, who leads houseboat tours on Dal Lake in the main city of Srinagar, said police officers approached him on Friday morning and asked his Indian guests to leave immediately.

"It was an absolute panic," Ahmad said. "Never in the years of turmoil in Kashmir have tourists been forcibly evicted like this." 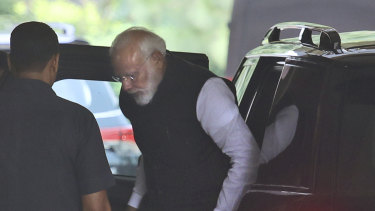 Hours later, after the announcement in Parliament, it remained unclear whether many Kashmiris had learnt of the decision. Experts expected large public protests despite the security presence, and said that Pakistan could foment further violence by firing artillery shells across the border and supporting attacks by militants.

"Within the Kashmir valley, there will be opposition leading to heightened and prolonged unrest, including increased activities of the terrorist groups," said Sameer Patil, a security analyst with Gateway House, an Indian think tank.

Turkey at risk from a devastating earthquake BIGGER than California one, scientists say

Family of boy, 13, who died after getting coronavirus give tribute