This is the jaw-dropping moment when a learner driver is smashed off the road by a furious Mercedes driver.

Driving instructor Chris was in the vehicle with his student during a lesson on the M1 when the impatient car swerved across the lane, smashing into the L-plated vehicle.

The learner, who had never been on a motorway before, was practicing driving from Sutton-in-Ashfield to Nottingham.

Chris told The Sun his student, driving a Peugeot, had gathered speed ‘confidently’ on the slip road at Junction 28 when the Mercedes veered across, causing the learner car to hit the barriers.

Dash cam footage shows a Kia in the left lane moving into the middle lane before allowing space for their car to merge.

Suddenly, however, a red Merc SLK200 accelerates behind to overtake.

But as the slip road gets narrower, the driver loses control, swerving into the learner driver’s leading causing it to smash into the barrier.

Footage shows the windscreen smashing and the airbags exploding as the car crashed into the hard shoulder, as 60mph as a result of the force for the hit.

The front wheel had almost been entirely severed off during the incident that took place in May last year. No one was injured during the crash.

The driving instructor said: ‘My learner and I were unable to correct the skid due to the force of the impact, so my Peugeot struck the motorway barriers. 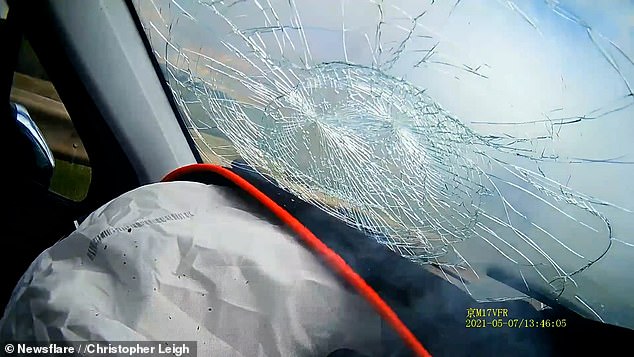 The Mercedes crashed into the learner driver car on the M1 between Sutton-in-Ashfield to Nottingham. The window screen was smashed and the airbags in the Peugeot exploded 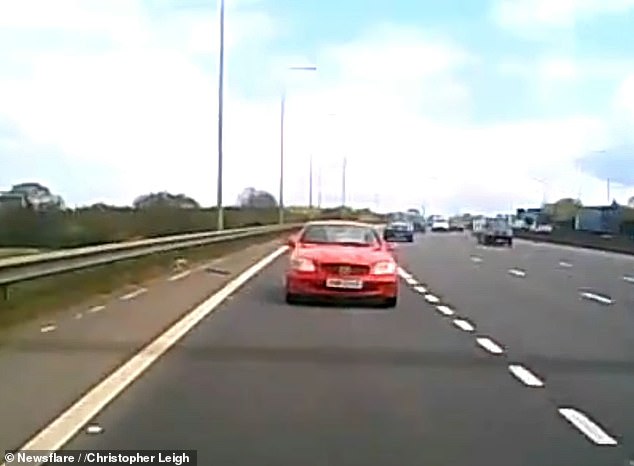 ‘The damage was so extensive; the car was deemed a total loss.’

Learner drivers were previously not allowed to use motorways before getting their full licence but this changed in England, Scotland and Wales in 2018.

It means that as long as a learner driver is accompanied by an approved instructor, in a dual-control car, fitted with L-plates, they are allowed to enter the road.

It is not mandatory for learners to be taken on motorways during lessons, but instructor Chris does it to prepare his students for ‘real life’ driving.

He added: ‘Since this change in legislation, I have made an effort to train all of my learner drivers on the motorway.

‘It equips them for real-life driving instead of limiting them to merely passing the driving test.’

Can I drink alcohol after having the Covid vaccine?