A man driving down Highway 99 in California last Wednesday had to make an abrupt stop when a smoking car came flying off an overpass and tumbled on the road, landing just feet in front of him.

Dashcam footage from the scene in Yuba City last week shows the man’s truck driving down the winding country road, as a white car could be seen flying through the air on the left, leaving behind a plume of smoke.

A girl in the truck then starts screaming, at which point the driver seems to notice the scene unraveling before him and stops, before the car makes a nosedive onto the street before him, flips over several times and lands upside down in front of the truck.

Metal pieces could be seen flying off the car, which had just narrowly passed through the power lines, with one piece flying at the truck and the battery landing about 60 feet in front of the truck. 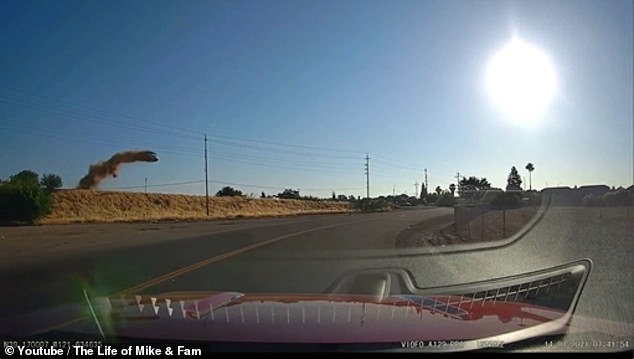 Dashcam video shows the moment a car came flying through the air on Highway 99 last Wednesday, leaving behind a plume of smoke 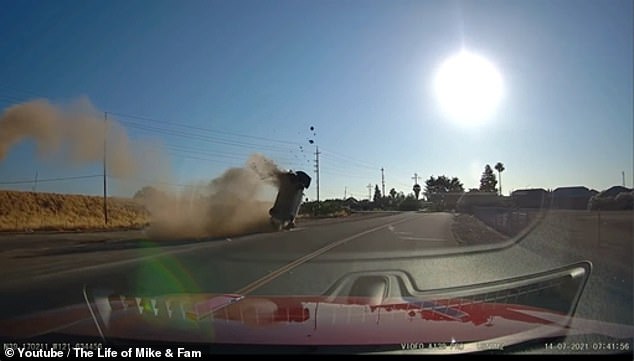 The car toppled over several times, after taking a nosedive onto the street 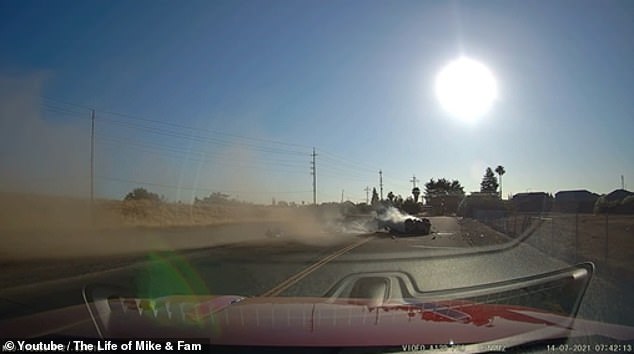 The truck driver and a female passenger then call 911, struggling to explain to the dispatcher what had unraveled before them, with the male driver eventually saying: ‘It jumped the whole road.’

He then got out of his truck, as the woman stayed on the phone with the dispatcher, and ran over to the burnt-out car, with another man running to the scene from the left side of the road.

In an update from the man who uploaded the dashcam footage to YouTube, The Life of Mike and Fam wrote there is another video of him trying to open the door to the upside-down car and running back to his truck to get his Ronin water bottle in an effort to extinguish a fire in the engine.

He said he then tried to open the passenger-side doors, but they were jammed shut.

‘I then heard a faint noise, and asked the occupant of the vehicle how many were in there,’ he wrote. ‘A voice said one, just one, and then I asked if they could move their le and body, but they were pinned down by the seats and the roof of the car.’

‘By some miracle, the person was laying face down on the roof in the passenger side,’ the man continued. ‘I was quite shocked and perplexed how someone escaped such an impact.

‘God must have had his hand with that person.’ 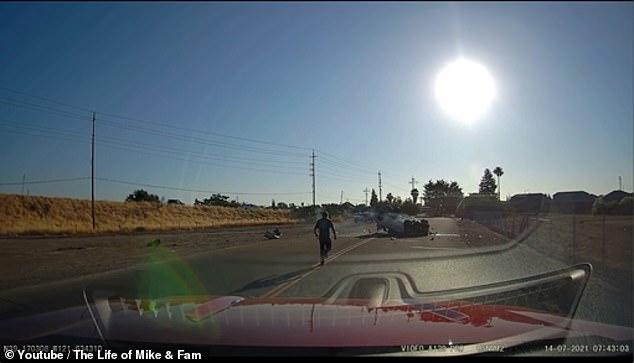 After calling 911, the truck driver could be seen getting out of his vehicle and running towards the burnt-out car to provide assistance 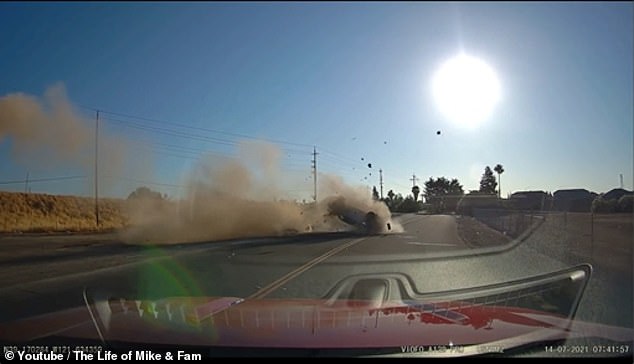 He added that the other gentleman who could be seen running towards the car in the video said he saw the vehicle driving ‘extremely fast’ on the freeway, and saw the car launch.

‘We both thought there could be no survivors,’ the uploader recounted, ‘but there was.’

Soon, he said, other people came and threw water on the car, with one person bringing an extinguisher for the fire, before emergency crews showed up.

DailyMail.com has reached out to the Yuba City Police Department and the California Highway Department for more information on what led up to the fiery scene.

But according to CBS Sacramento, witnesses said the car had just been involved in a hit and run while driving backwards on Highway 99 and exiting an on-ramp.

The car then missed a ‘really hard left-hand turn,’ Brian Canejo, who works nearby, told the station, and continued driving straight over the overpass.

Authorities told CBS that ‘intoxication was not a factor,’ and the woman behind the wheel of the car walked out of a local hospital with only minor injuries.

While You Were Sleeping: 5 stories you might have missed, July 21