Monkeypox cases appear to be on the decline in the epicenter of the country’s outbreak.

Data from the New York City Department of Health & Mental Hygiene shows that as of Aug. 30, the latest date for which data is available, the Big Apple recorded a seven-day rolling average of 9 infections.

That’s an 82% decline from the seven-day rolling average of 50 recorded two weeks ago.

MORE: US reports at least 31 cases of monkeypox among children

Since the outbreak began in mid-May, no state — or city — has recorded more monkeypox cases than New York, so a drop in infections could be a prediction of what is to come for the rest of the country.

“The good news is monkeypox is declining,” Dr. Roy Gulick, chief of the division of infectious diseases at Cornell University’s Weill Medical College, told ABC News. “Globally it’s declining and across the United States but being really led by the major cities and we’ve seen it right here in New York.” 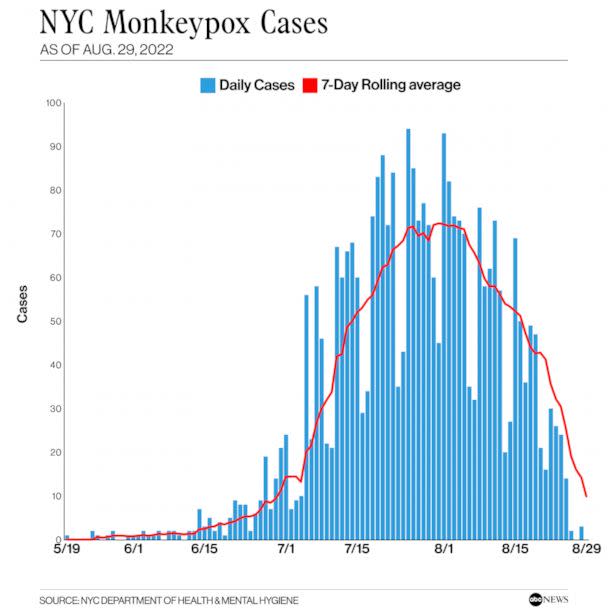 Even as the U.S. approaches 20,000 total infections, nationwide trends appear to show a drop, according to data from the Centers for Disease Control and Prevention.

As of Aug. 31, the seven-day rolling average of cases in the U.S. sits at 281, the lowest number recorded since July 25, according to an ABC News analysis of CDC data.

The outbreak has primarily been concentrated in men who have sex with men, a group that includes people who identify as gay, bisexual, transgender and nonbinary, although health officials have said anyone — regardless of sexual orientation — is at risk if they have direct contact with an infected patient

Health experts say men who fall into this category have been likely doing a good job following doctors’ advice in proper precautionary measures.

MORE: Texas confirms death of monkeypox patient, but cause of death still under investigation

“Health departments as well as community advocates and organizations have really gotten the word out about monkeypox,” Gulick said. “Not only that it was something people needed to pay attention to, but also what to look for, what to do if you had lesions, when you should go see your doctor, and then how to avoid passing it to other people. Or if you didn’t have it, how to avoid getting it in the first place.”

People at risk changed their behavior in response to the threat, he added.

On Thursday, the NYC DOHMH announced it will begin making second doses of the monkeypox vaccine available for those who received their first dose at least 10 weeks earlier.

Walk-ins for first doses will also be accepted a city-run sites, a sign that scarcity of the vaccines is abating. 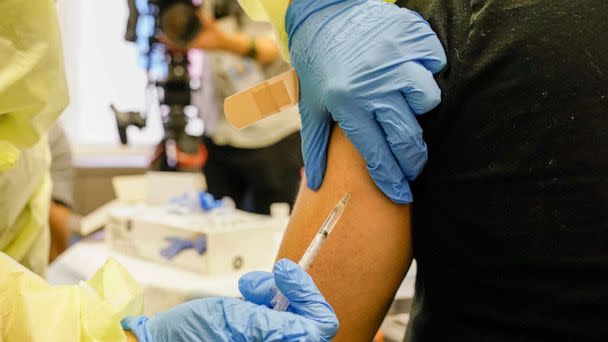 “Here in New York City, more than 70,000 monkeypox vaccines have been given and recently there was a recommendation to split the dose — make one dose into five doses — and that strategy is also being rolled out, so more vaccines are available,” Gulick said. “We did hear about waiting lists and long waits and trouble getting appointments initially for vaccines, but that really is not the case anymore.”

However, Gulick added the outbreak isn’t over and urged people in high-risk categories to keep taking precautions.

“Although the numbers are encouraging because they’re going down, there is still a risk,” he said. “So, people who are at risk should absolutely seek out the vaccine, talk to their providers about whether they should get it or not and then people should be aware of contacts or changing their behavior to reduce the number of contacts that they have to avoid getting monkeypox.”

Monkeypox cases are on the decline in New York City, data shows originally appeared on abcnews.go.com

Nuclear inspectors on ground after Iran says enriching at Fordow